One Resource Trumps Them All

Back in antiquity and halfway around the world, the superpowers of the ancient world consistently fell to one foe...

The Tang Dynasty ruled from 618 A.D. to 907 A.D. during what is widely considered a Golden Age in Chinese history. But the beginning of the end came in 873 A.D., when an illegal salt trader organized starving peasants and started a decade-long war following a disaster.

By 880, he had seized the capital and throne.

The next year, the salt trader was driven out by the Tang emperor — but his dynasty was doomed. The empire withered and suffered for years. Eventually, the last Tang emperor was deposed by a general.

The Five Dynasties and Ten Kingdoms period followed, with chaos, violence, and fragmentation in power vacuums lasting for 53 years.

Fast-forward to modern day, and not much is different... If anything, what brought the Tang Dynasty (along with the Yuan and Ming Dynasties years later) to its knees is more of a threat today than ever before.

I'm talking about water — specifically, a lack of it.

By studying stalagmites, a joint Chinese and American team found a significant decrease in deposits correlated with the beginning of the end of a Golden Age in Chinese history.

The cave was in an area completely dependent on monsoon water for sediments to slowly drip down and build up the spike, just like tree rings. In 873 A.D., the deposits showed a profound lack of growth because there was very little water to deposit materials. The same correlation appeared for the fall of the Yuans and Mings as well.

Droughts, and the subsequent lack of water, destroyed all three powerful Dynasties.

Seemingly simple and boring, water is so easy to take for granted. But it is essential to life on this planet. Every man, woman, and child would kill for it if needed.

Unfortunately, over a thousand years of progress hasn't solved the problem. And to make matters worse, the modern world's problems now go far beyond rain cycles.

Ashley Yost's grandfather sank a well for his family farm in Kansas 49 years ago that pumped 1,600 gallons per minute.

Last year, Yost's well managed 300 gallons per minute — along with a whole lot of sand that degraded his topsoil.

The High Plains Aquifer is rapidly running dry. The former site of a massive inland sea has virtually disappeared as center-pivot irrigators with half-mile radii pull hundreds to thousands of gallons per minute from underground.

Since the start of the 20th century, the equivalent of two Lake Eries has been sacrificed for our amber waves of grain. In Kansas, the aquifer fell by an average of 4.25 feet in 2011 and 2012. Some wells fell by as much as 30 feet.

An increasing number of American farmers are going to have to switch to dry farming practices and prepare for much lower yields.

One look at a map of groundwater depletion and crop value should clue you in as to how serious this problem is: 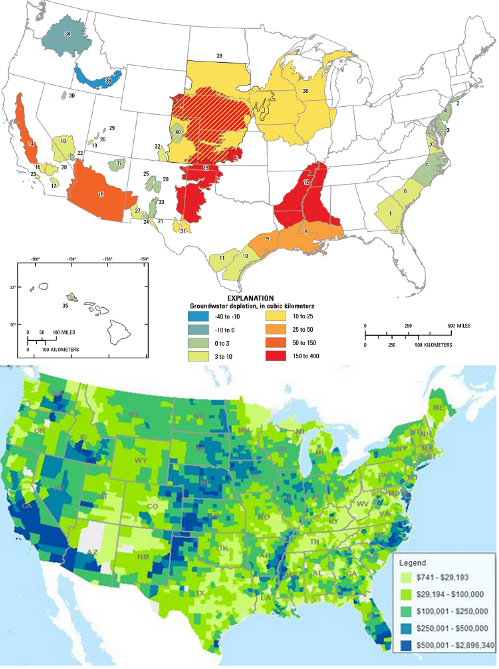 A whole lot of valuable crops that sustain our country — along with import-dependent countries — are going to disappear. Billions will vanish from already squeezed farmers and our national economy. The problem will worsen as every food product will see rising prices.

This issue is a global one. An article published in the journal Nature last year concluded that the drain on aquifers around the globe averages out to 3.5 times a sustainable rate. 70% of water drawn from freshwater sources support agriculture.

As we know from history, famine leads to other serious problems...

Depleting water sources will cause the same problems droughts did in ancient China. The only difference is the effect will be permanent.

Take a look a this chart of food prices, food riots, and Arab Spring revolutions, with deaths listed alongside it (and keep in mind the data is a bit outdated, considering deaths from the Syrian civil war are now close to 100,000 and counting): 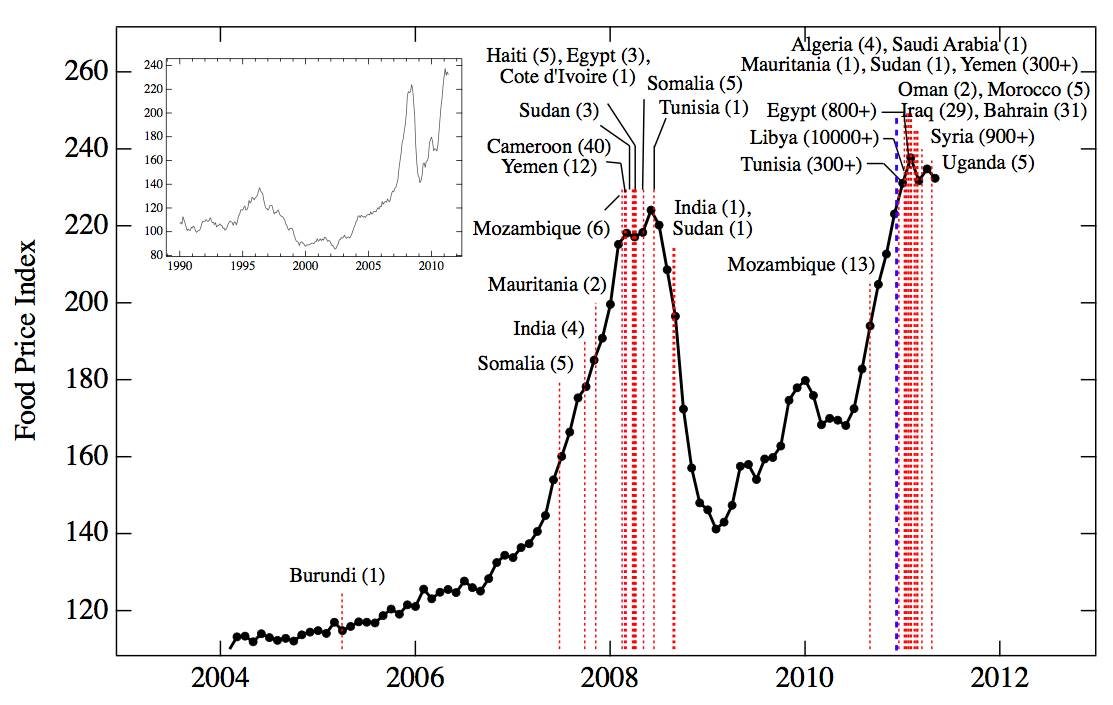 The Middle East, with its scarce and heavily contested springs, is by far the worst hot spot of water scarcity. While it may not be obvious on the surface, it is always right under the surface, fueling the violence and struggles that pop up in the news.

Just last year, a United Nations survey found that of 530 surveyed springs in the West Bank, 30 were taken over by Jewish settlers. Palestinians only had limited access to another 26, where settlers had recently moved.

There are plenty of reasons for the fighting in Israel and the West Bank, but even those who have avoided zealotry and violence would become desperate. Springs are the sole source of water in these areas. Without access, farmers lose their livelihood and land or see their crop yields plummet.

Just to the west is an old Israeli foe from the wars decades ago. Thankfully, peace has been maintained for years, but King Hussein of Jordan identified water as the only reason that might lead him to war with Israel. And he's not alone...

In late 2012, the president of Uzbekistan indicated that efforts by neighboring Kyrgyzstan to build hydroelectric dams could spark war. He has rattled his saber over a similar project in Tajikistan, too.

Inevitably, more water will need to be desalinated and more wastewater will have to be filtered to keep this planet's ever-increasing population alive. A huge opportunity will come from the companies that develop the methods to do so.

You could hunt for small companies with innovative products that could revolutionize water purification...

Membrane-based water filtration is estimated to grow from a $5.54 billion sector to a $12 billion sector by the end of this decade. For now, the cost to produce water is still way too high for it to catch on.

Another option involves the handful of ETFs that track indices of water infrastructure-building companies that you can use for stable exposure.

Over the last year, two have beaten the S&P 500, while the other has kept pace.

And although their performance ebbs and flows through the years, they are good choices for exposure to this long-term opportunity:

It is a good idea to keep these ETFs — as well as companies developing clean water technologies — on your radar.

When it comes to this most precious resource... things are only going to get worse from here on out.