Dude, How Much for My Car?

I was basking in the sunshine, top down in my Jeep Wrangler with my daughter in the back seat. All of a sudden, the engine light came on and the car began lurching violently. Thankfully I was within striking distance of a parking lot and was able to drift the felled beast into a nearby spot. Crisis averted, for now.

Now, I keep my Jeep in pristine condition — outside of some child-related smoothie stains and a couple of granola bar wrappers from time to time. I change my oil religiously, refill my fluids dutifully, and am acutely aware of any difference in engine performance.

I had it towed to my nearby Jeep dealership, since it’s still under warranty. It sat there for several days. There was some vague communication and multiple follow up calls before one mechanic answered, stammering, and said, “We may need to rebuild the engine.”

Admittedly, I could have been nicer when I offered my reply of, “What the hell do you mean by MAY?”

But the next call I got from the dealership was far more confounding...

“Mr. Mengel,” the man asked. I replied “yes” and awaited even more bad news about what appeared to be a lemon of a vehicle.

“I’ve noticed that you have a 2019 Jeep Wrangler. I was calling to see if you’d like to bring it by — we can give you top dollar and get you into a brand new Jeep, with even more perks, at close to the same price you paid.”

Clearly there was some disconnect between the sale and maintenance departments, but the fact that my two-year-old Jeep was in high enough demand to fetch the kind of money they were offering was bizarre. Now, being in the industry I am, I have my ear plenty close to these kinds of issues in the market. I knew that the used car market was red lining. But things have a way of taking on a more urgent lens when they stare you directly in the eyes.

Like when you go to three different rental car locations to find any car at all, much less one I would have wanted. They were all sold out for at least a week. That's because rental car companies sold off a slew of inventory during COVID for obvious reasons. Nobody was renting cars. Plain and simple. They didn’t anticipate having to ramp back up to full capacity in the snap of a finger.

I finally found a rental operation in — to put it politely — a part of Baltimore I don’t normally visit. I was still charged about a hundred bucks a day for a Hyundai Accent.

But the larger story here is that we’re being charged more for about everything these days: food, gas, and homes.

Here are the facts...

In June the Consumer Price Index (CPI) jumped 5.4% — the most since 2008. Other indexes followed suit and approached high risk levels: 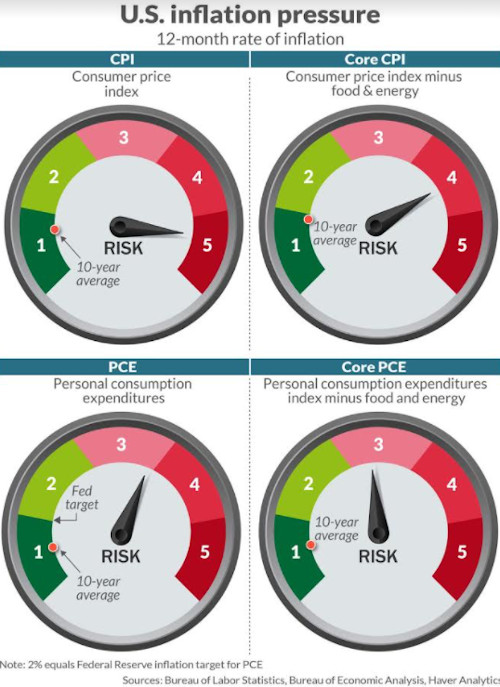 A whopping one-third of the CPI increase was due to used car prices, according to the Labor Department.

Now, to be fair, this was kind of a perfect-storm situation for used vehicles. As I’ve written about many times before, the massive semiconductor shortage has slowed manufacturing for all of the world’s largest automakers. They aren’t able to keep up with demand.

You've read our warnings over the past two years — and even the last few days — inflation has slowly but strongly crept up since the pandemic hit. There is no denying that anymore. If you recall a few months ago, the Fed’s Jerome Powell had famously said that the rising inflation is “transitory.”

I would humbly suggest that the entirety of currency, finance, and investing is transitional. We’ll see many prices, like food, remain high for long periods of time. (Hidden “market prices” for rare tuna is one thing. The same for buffalo wings is sacrilege.) We’ll see others, like used cars, come back down to earth. (If you sell a used car, don’t forget, you’ll have to replace it. Don’t get stuck with a scooter.) I pray for anyone trying to buy or rent a house that those prices return from the atmosphere as well (never plop down your life savings on anything without a simple housing inspection).

There simply isn’t a one-size-fits-all approach to timing or fighting inflation.

In the past, investors hedged inflation with precious metals like gold, or even economic instruments like the iShares TIPS Bond ETF (TIP). That stands for Treasury Inflation Protected Securities (TIPS), and the ETF tracks inflation-protected U.S. Treasury bonds. TIPS is up only 4% in the last year and 12% in the last two. Talk about just the tip. Sure, it beats inflation itself, but it’s hardly the home run you’d want for perfectly timing inflationary markets.

As for gold, we haven’t seen prices do anything near what you’d expect for a hyperinflation-type rally. As our precious metals expert Luke Burgess told you last week, “There is no such thing as a perfect hedge against inflation. Gold’s performance during times of historically high inflation has a mixed record.”

That’s why he has made far more money betting on solid mining companies instead of burying gold bars in his backyard.

There is more than one way to skin a cat (or buffalo wing) and my colleague Jason Simpkins has found them.

Jason just released the definitive inflation report of the year. He’s identified the three safest and most profitable ways to not only keep up with inflation, but beat it at its own game. It’s a triple-headed hydra of wealth preservation and wealth building.

It’s anything but transitory. It’s transformational.

As for my Jeep? It's now transportational.