The equity time bomb has starting ticking, and investors may have just a small window to ride it before things blow up.

With a name like Dr. Doom, we've come to rely on Nouriel Roubini to lay the gloom on pretty thick.

But this week he tossed in a little sweet with his sour...

Roubini is the same economist who warned of the S&P dropping to 500 points a couple years back. A bull he is not.

But here's the rub: He is predicting a solid two years of growth in stocks and bonds before the whole thing goes up in smoke (and once it does, it won't be another recession, but rather a full-blown depression)...

Roubini made his shocking prediction as featured speaker at this week's Milken Institute Global Conference in Los Angeles, where he turned heads when he accused the Fed of "creating massive fraud" by keeping interest rates so low for so long.

He noted that even though the market is riding a QE sugar high while the Fed's money spout is flowing, the fun is over once the tap squeezes shut...

Last time, interest rates were too low for too long (2001-2004), and the subsequent rate normalization was too slow, inflating huge bubbles in credit, housing, and equity markets.

And we remember all too well what happened then... 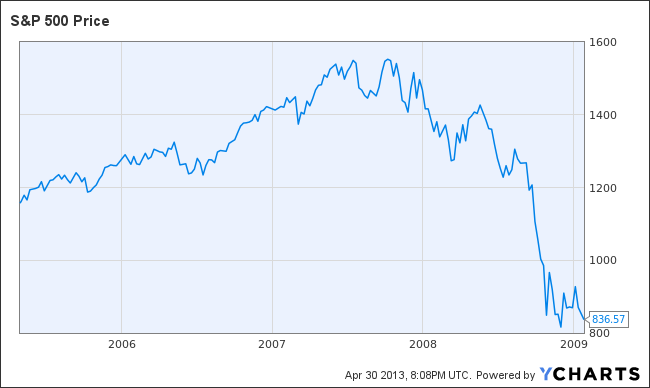 Roubini predicted that crash almost to the day.

So while we know he has a penchant for dramatic flair, when he talks, we listen.

How will the Fed finally end QE? Will they just shut the presses down one day, crashing the artificially inflated 'real' economy that produces goods and services... or will they choose to slowly scale back the program over a longer period of time, slowly blowing a bubble until it bursts, crashing the financial system itself?

Roubini calls this the trapdoor at the Fed's exit:

If the Fed has only one effective instrument — interest rates — its two goals of economic and financial stability cannot be pursued simultaneously. Either the Fed pursues the first goal by keeping rates low for longer and normalizing them very slowly, in which case a huge credit and asset bubble would emerge in due course; or the Fed focuses on preventing financial instability and increases the policy rate much faster than weak growth and high unemployment would otherwise warrant, thereby halting an already-sluggish recovery.

A recent survey of major players on Wall Street is forecasting the former: Around 90% of the fund managers and economists surveyed predicted the Fed will keep their foot on the gas deep into next year, and start reducing their monthly asset purchases around February of 2014.

The first Fed rate hike isn't expected until the second quarter of 2015.

So while we chew our nails and wait with bated breath, there is still time to play their game before the proverbial sh*t hits the fan.

Roubini advices investors to enjoy it while it lasts. “In the short term, it's great for assets.”

So stock up now — but be sure to cash out before the money shower turns into a bloodbath.

The most attractive area to do so is the junior mining sector, which has been beaten to a pulp over the last few years and can't really go any lower. This is a historic opportunity to get into the sector at rock-bottom prices.

We've compiled a report on the one area we think will see the biggest gains. You can access it here.

You'll want to take advantage of this lucrative opportunity before May 31, as the information in this report is extremely time sensitive...