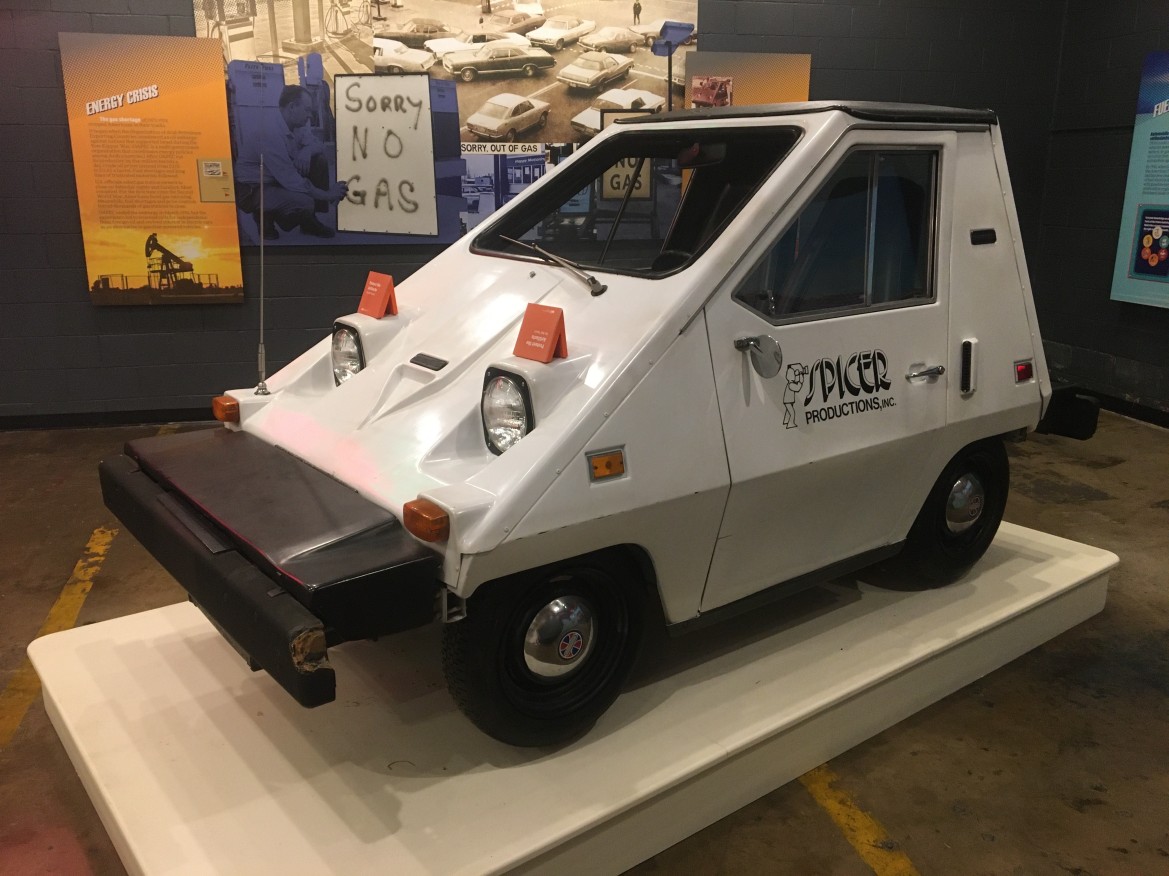 This example was once used by a local film production company, Spicer Productions, and resides today in the Baltimore Museum of Industry. The Comuta-Car was an updated version of a very similar electric vehicle called the CitiCar, which was produced from 1974–77. 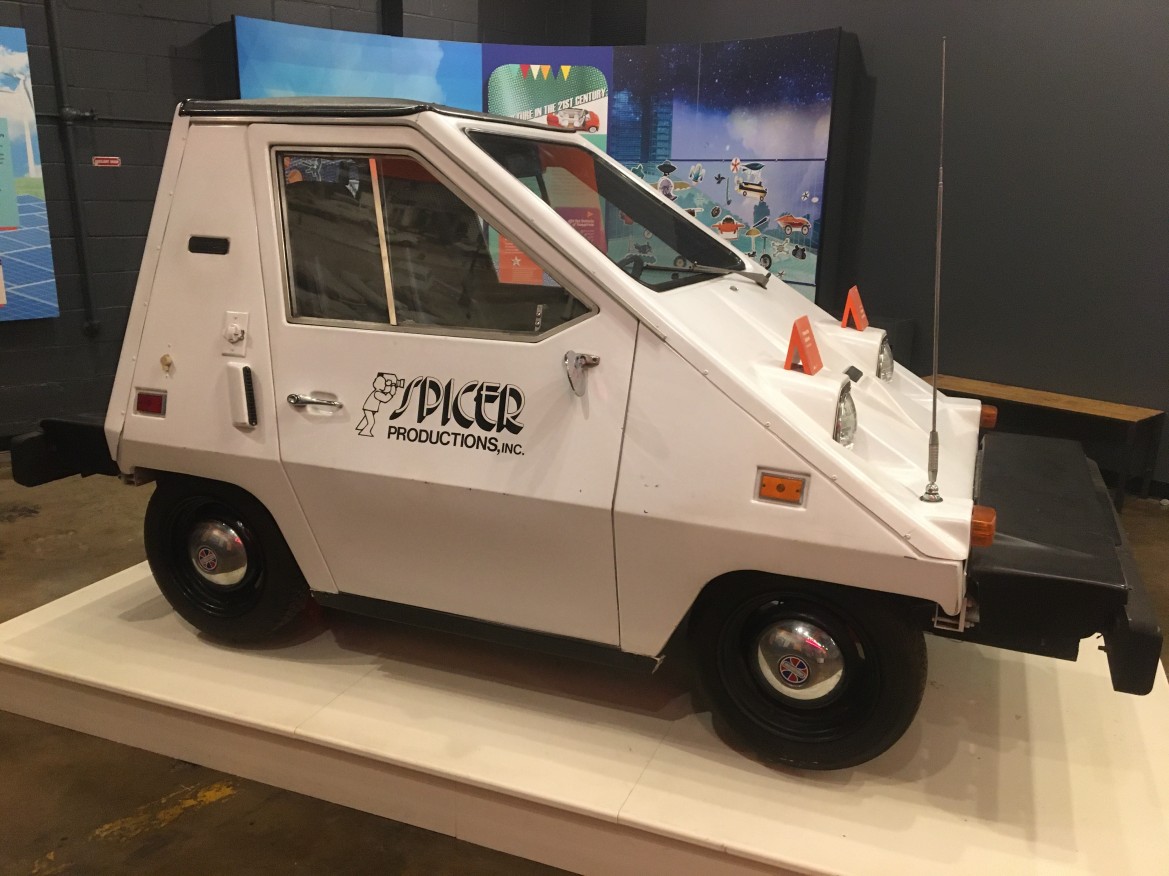 Despite looking like a Star Trek shuttlecraft, the CitiCar (along with ancestors the Comuta-Car and Comuta-Van) holds an important spot in the history of electric vehicles.

The CitiCar was America’s second best-selling commercial EV in the 20th century, after the Nissan Leaf. Accounting for all different models (CitiCar, Comuta-Car, and Comuta-Van) more than 4,400 of these vehicles were produced from 1974–79.

Here's what one of the original CitiCars looked like... 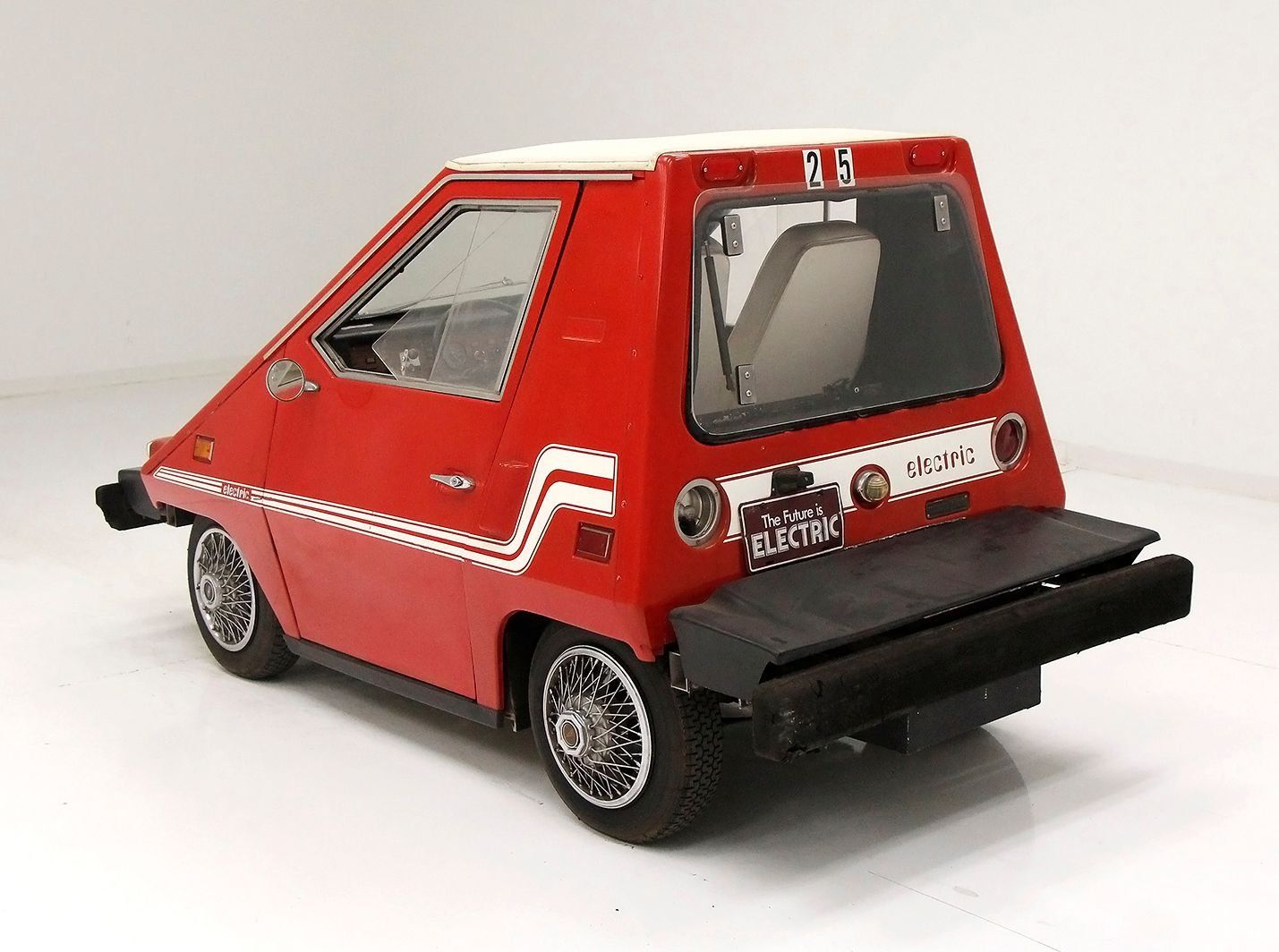 The CitiCar was first produced in Florida by a company called Sebring-Vanguard and was designed in response to the 1970s fuel crisis as a short-distance vehicle. The idea was owners would use the CitiCar for very short trips to work or the grocery store. It wasn't intended to replace regular vehicles. Instead, the CitiCar was meant as a supplementary means of driving.

The car weighed about 1,500 pounds and would run on eight 6-volt batteries that would produce… well, it would produce at least some horsepower and torque ... at least as much as a wet/dry vacuum.

… well, look, do you really think this thing was breaking any land speed records?

It was as slow as it looks. The CitiCars reportedly went from 0 to 25 mph in 6.2 seconds and had a maximum speed ranging from 30–50 mph.

But the CitiCar was essentially just a beefed-up golf cart with a hard plastic shell. So maybe it could've gone 50 mph… if it were going downhill, with the wind to its back, on the smoothest road ever, and in the absolute perfect weather conditions. But I wouldn’t want to drive that thing at 50 mph.

Since then, EVs have come a long way. 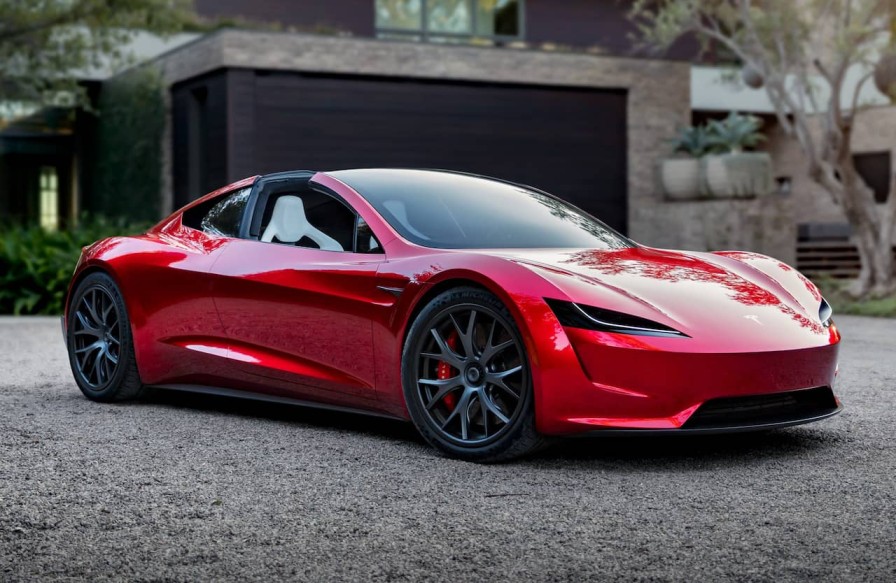 Tesla’s second-generation Roadster is now the fastest street-legal production car in the world, with a top speed over 250 mph. It accelerates from 0 to 60 mph in 1.9 seconds and has a range of 620 miles.

Even though the CitiCar and Roadster have very little in common, these are the types of electric vehicles that generally get all the media and public attention — the CitiCar for its quirkiness and the Roadster for its performance. But the EV market is way bigger than commuter cars alone.

Jeff Siegel, senior EV market analyst, says in a recent report, “The EV revolution is far, far bigger than Tesla’s slick new Roadster, or any of the quirky solutions for commuter travel. Industrial vehicles of all shapes and sizes are being electrified faster than passenger vehicles.”

What he means are vehicles like commercial vans, buses, trucks, tractors, and even super-huge ocean vessels are all becoming EVs. Siegel points outs:

The reason many companies are making these changes basically boils down to new regulations. States across the nation are instituting new mandates for zero-emission commercial vehicles.

All commercial trucks sold in California, for example, must be 100% electric by 2045. And another 15 other states have made this very same commitment to electrifying their commercial trucking fleets.

But it’s not just private companies that are switching their commercial vehicle fleets to electric.

According to CNBC, "President Biden plans to replace the government’s fleet of cars and trucks with electric vehicles assembled in the U.S."

And that doesn’t even include the nation’s 580,000 buses for schools and public transportation that he wants to electrify.

As Bloomberg notes, "Passenger cars can only do so much to slash transportation-related emissions. Fleets of electric buses are also essential."

President Biden is calling for a whopping 70% of America’s public transportation sector to be electrified by 2030.

Almost every U.S. state has a transit agency that currently owns or is planning to own new electric buses.

The demand for electric buses is already huge — and it’s still growing.

In his new report, Jeff Siegel talks more about the EV shift in commercial vehicle fleets and tells investors about a company with a $5 stock and a battery technology that could be a game-changer for industrial vehicles like those I’ve already mentioned, as well as garbage trucks, ambulances, 18-wheelers, mining excavators, and much more. Go here to read his report now.