There is nothing more immediately fulfilling as an investor than collecting checks in the mail from an investment you've already made.

But what if you could take those dividends and plug them into even better payouts?

From a fan's perspective, it's a pretty easy decision...

Let's use the poster boy for steroids as an example: the infamous Barry Bonds.

Sure, Barry Bonds was already a superstar when he was playing baseball "the right way.” He was a three-time Most Valuable Player, was named to eight All-Star teams and was already a shoe-in for the Hall of Fame.

But when he (allegedly, cough, cough) started taking steroids, his stats went off the charts. He went from a solid All-Star to the single best player baseball has ever seen.

All you have to do is look at his stats: in the 13 years that he played the game the right way, he averaged 32 home runs a year. After getting juiced, he went on to average an unheard of 49 home runs a year.

That's a staggering 50% increase in production!

It may sound crazy, but you can do the exact same thing with your dividend stocks — only with even better results.

Your Complete Guide to Dividend Aristocrats

Join Outsider Club today for FREE. You'll learn how to take control of your finances, manage your own investments, and beat "the system" on your own terms. Become a member today, and get our latest free report to get you started: "Dividend Aristocrats: The Only Dividend Stocks You Can Hold Forever."

It contains full details on the highest quality dividend paying stocks the market has to offer.

Besides baseball, dividend reinvestment programs are one of my favorite national pastimes.

Dividend reinvestment programs — or DRIPs — allow you to buy stock directly from the company, and reinvest your dividend payouts right back into new shares. This strategy relies on the power of compound interest, the single most powerful wealth building secret known to man.

And like most secrets, it's really quite simple once you know how it works. The interest on your dividend payments buys more shares, which raises your stake in the company. From there, your interest payments keep growing as you accumulate more shares. I like to think of it as dividends on steroids — while you may start off with a small, scrawny position in a company, after years of juicing, it just keeps getting bigger and bigger and bigger, until it is an unstoppable force.

Like Barry Bonds' stats before and after steroids, it's pretty simple to see the power of these “dividends on steroids.” Just check out the difference between simply cashing those dividend checks versus reinvesting them. Here's a look at large-cap stocks during baseball's steroid era: 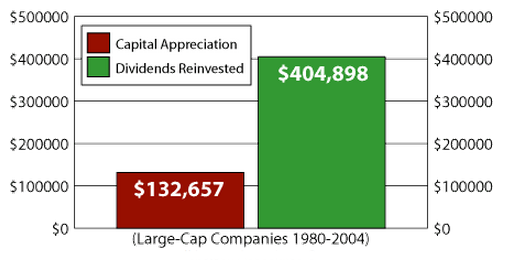 That's well over 300% better returns on the exact same stocks. Which account would you rather have?

It's a shocking number in its own right, but it doesn't even take into account the fact that with DRIPs, you typically never pay any broker fees. When you buy stock directly from the company, it will almost always cover all of the transaction fees.

The best part is, unlike having to take a painful steroid injection every week, you actually don't have to do a thing. The account is set up on auto-pilot and you can just let that interest compound as long as you'd like.

It is the ultimate set-it-and-forget-it investment. But as good as it sounds, there is one thing you have to be aware of...

While this strategy is a long-term no-brainer in my book, there is one significant detail to keep in mind: “What if I get worried about a company's dividend and would rather invest my dividend money elsewhere?”

It's a great question, and it has a pretty simple solution. And like steroids, it's a synthetic one: the “Synthetic DRIP.”

Here's one reason why you would want to go synthetic over natural...

Let's say you own a dividend stock like BHP Billington (NYSE: BHP), which has had a high-yield, and a decent run of increasing its dividend in the past. But, all of a sudden, the company slowly starts rolling that dividend back, as BHP did last week for the first time in 15 years.

That is usually the mark of slowing growth and performance.

Like baseball, you may not want to cut the player (or stock) entirely — he still may be valuable to the overall team (or portfolio) — but you certainly don't want to keep pumping money into a moribund asset like an aging player. You'd want to put that money to work to shore up other areas of your team.

That's why synthetic drips are a great tool for those who keep a close eye on their portfolios.

These broker-based programs take your dividends and reinvest them back into whatever company you choose. So, if you had purchased BHP Billington in your brokerage account for the high yield, you could automatically set your huge dividend payout to go towards buying a bullet-proof dividend aristocrat like General Electric (NYSE: GE) or Abbott Labs (NYSE: ABT).

The choices are endless.

Many brokerages offer synthetic DRIPs at zero or little cost, but you'll need to check with them to make sure you aren't getting hit with regular fees and charges for doing so.

There are also two questions you should ask yourself before deciding on which kind of DRIP is right for you...

Deciding whether to go with a synthetic or natural DRIP really depends on your style of investing.

1) If you want your money to make itself, without having to lift a finger, I'd go with the traditional DRIP.

2) If you are a more active trader, and are vigilant enough to move in and out of stocks on a regular basis, you may want to opt for the flexibility of a synthetic DRIP.

Either way, you can juice your portfolio for Barry Bonds'-like returns — without that pesky 'roid rage. It will make the difference between retiring as a beaten down journeyman and going out in style like a Hall of Fame superstar.

The choice is yours.