Congress Is Making Millions, Why Aren't You?

This tired phrase is very simple in theory, yet applies to so many complicated things — investing included.

We’ve all seen it play out before in our own lives: somebody less capable somehow manages to outdo us. It’s maddening and could make you wonder why you even bother trying at all. "What are they doing that I'm not!" you may scream into your pillow on especially bad nights.

If you’ve done everything in your power to get ahead — only to watch somebody else lap you — it’s time to try something else.

Many successful people had figured this out long ago: basketball players joining a super team, companies buying up young competitors, or — worst case — prisoners joining a hated gang to avoid being beaten up every day.

Speaking of people who need to be locked up and beaten, let’s talk about Congress!

All they do — when they aren’t campaigning — is meet up in backrooms rife with inside information that has broad implications for every facet of the economy. They are meeting with bankers, insurance companies, and defense contractors regularly to carve out a piece of the American pie for themselves.

That means they have a big leg up when it comes to investing.

While the STOCK Act technically makes insider trading by members of Congress and other government employees illegal, that certainly hasn’t stopped them from making an absolute fortune on companies that they are intimately familiar with.

And there's nothing you can do about it.

Today I’d like to focus on the millions of dollars that congressmen and women have personally invested in defense stocks. I’ll also show you how you can do the same thing — but without the pesky legal issues of insider trading or the cost of a D.C. office.

On January 3, President Trump ordered a missile strike to assassinate revered Iranian General Qassem Soleimani. It worked: Soleimani was killed and panic set in. Thousands took to the streets in Tehran, we evacuated our consulates in Baghdad, and the rest of the diplomatic world took a very deep breath.

The next day, while the rest of us were wondering if World War III just started, many of those in Congress checked their stock portfolios and were rather pleased.

Considering that members of Congress own somewhere close to $6 million in these very defense stocks, it’s not a stretch to say that the missile strike made them a pretty penny that very morning.

Just check out this chart from Sludge, who just did a great piece on this very issue: 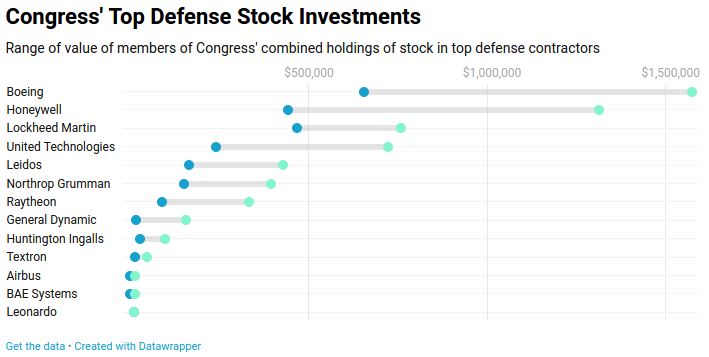 Now, I’m not cynical enough to suggest that the people who haunt the hallowed chambers of Congress are praying for war. Nor are they purposely trying to incite wars to make a few thousand bucks. But the fact is that these "civil servants" are privy to plenty of information that we are not when it comes to geopolitics and defense contracts.

These defense bumps happen all the time.

As MarketWatch pointed out, ever since an American contractor was killed with a Katyusha rocket in Iraq at the end of 2019, defense stocks have been the single-most profitable sector in the S&P. 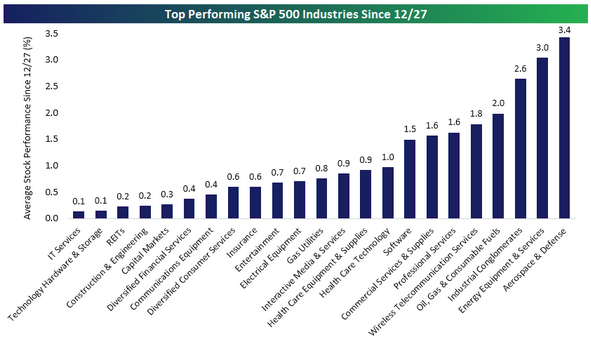 In a touch of irony, Congress has given you the chance to bank the same dollars that the bureaucrats reap. It quietly passed a law that mandates billions in payouts to everyday Americans...

In 1990, Congress ratified Program 101-508. It ensured that most federal properties would be leased from private landlords instead of purchased outright.

You see, purchasing or constructing a new office building for a federal agency, like the FBI, requires a huge capital expenditure upfront. These military hawks are also budget hawks. They agreed that the government should lease office space from the private sector. That way, it only has to cover year-to-year rental expenses.

And this creates a huge loophole for investors to secure income payouts that are virtually guaranteed by the government.

It contractually obligates the U.S. government to pay up, every month for the next few decades.

It can’t be rescinded.

The contract is ironclad and has never been broken before.

For years, a small part of the private sector —​ with high security clearance —​ had exclusive access to what should have been a right for all Americans.

Thankfully for us, now it is...

My colleague Jason Simpkins tipped me off to a company that leases property exclusively to U.S. government agencies. As long as the government keeps going — which, as we noted, the congressmen and women have a very vested interest in — you can collect checks along with them.

It’s like buying an airbase instead of 20 different planes.

I'll let him tell you all about it.