Clearly I Am Not Optimizing My Screen Time

Take a look at these two people. Both won about $3 million at premier world championships last year.

Novak Djokovic is pretty easy to spot on the right. He was the 2019 Men's Singles Wimbledon champion.

Anyone who follows tennis knows him. How about the young man on the left, though?

All 23,700 tickets at the Arthur Ashe Stadium in Flushing, New York were sold out, and at least 2.3 million people watched him win a championship on Twitch and YouTube, which were far from the only platforms to watch.

Don't know his name? He is Kyle "Bugha" Giersdorf, he was 16 when he won, and he was the 2019 Fortnite World Cup Singles champion. Eight new millionaires were minted that night.

And right there is when most people will tune out. I wouldn't blame you if I was going to talk about the game itself at all but don't do it. You'll miss an opportunity to profit unlike any other right now.

Fortnite, that ridiculous source of children dancing like idiots, online meltdowns, and thrown controllers. But look at the numbers, they're nuts.

Already, the champion is making the same prize money, technically about $15,000 more for Giersdorf but that's a rounding error at $3 million. Already, more people are watching.

Look at those images one more time. Already, big-name sponsors are getting in on the game and rapidly inflating prize money and total earnings for top-tier winners. Lacoste for Djokovic, Nike for Giersdorf on the stage of the World Cup and on The Tonight Show with Jimmy Fallon.

Eyeballs. They're all that matters. It isn't just the competitions either.

That's a lot of people seeing ads for apparel, consumer goods, computer hardware and software, accessories, and even potentially in-stream live ads from Giersdorf himself. Want a can of Coke in the foreground of a live stream? Let's make a deal.

And unlike TV viewership, which has intangible benefits at best — like print advertising before the internet — the sponsors can see every viewer and click.

It is ideal for ad targeting and thus a treasure trove of data and revenue for sponsors of the events, the teams and players, and the streaming platforms.

You don't need to care one bit about the games they play. Care about what the sponsors care about.

They care about eyeballs and so should we. The data shows why.

Right now eSports is clocking in at an average-per-year viewership growth of 22.3%.

Over 454 million tuned in to eSports events last year. That number is expected to jump to 654 million viewers in just two years. That's more than the populations of the U.S., Canada, Japan, Germany, and Great Britain combined.

Some events are already pulling in nearly double the number of viewers of the Super Bowl, notorious for its insanely expensive ad prices.

With all those eyeballs, and with the growth and vastly improved advertising data and platforms, revenue has yet to keep up. That will change and it will change fast. 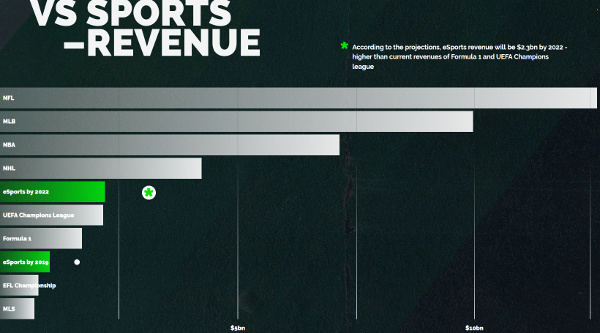 Everything points to eSports being a runaway success for years to come, with a massive wave of investment and revenue following the eyeballs.

And unlike traditional sports, we can directly invest and profit from the trend. No cartel of owners voting on who can join their billionaires' club. Just direct and easy-to-understand stocks.

We've talked about eSports around the office on and off for a while now, and we've all been trying to find the right angle to play to get a stake in this meteoric multi-stream revenue growth play while there is still such a huge chasm between viewership and revenue.

Jimmy Mengel has found companies that match exactly what we are looking for, and has just shared them with the readers of The Crow's Nest.

They're strong additions to an open portfolio that is up 37% on average, with closed portfolios up from 70% to 380% per year over the last five years.

Now is your chance. Don't miss it.