At times, it can feel dirty, unnatural or just plain wrong...

But sometimes you need to hold your nose and buy despised stocks. If you really want to bank serious gains, you simply cannot ignore sectors that are trading at record lows.

After all, how else do you plan to buy low and sell high?

As hundreds of tons of radioactive waste from Japan's Fukushima Daiichi plant spills into the Pacific Ocean, there is perhaps no asset class more hated right now than uranium.

But the fact remains we need uranium.

We depend on nuclear power for 18% of our energy.

And the international community is even more reliant on nuclear power, whether they'd like to admit it or not...

The Chinese need nuclear power, and the setbacks in Japan are not going to change that.

China currently has 17 nuclear reactors online and another 28 in the works. All told, the World Nuclear Association expects China to quadruple their nuclear reliance by 2020.

Check out this mind-blowing chart: 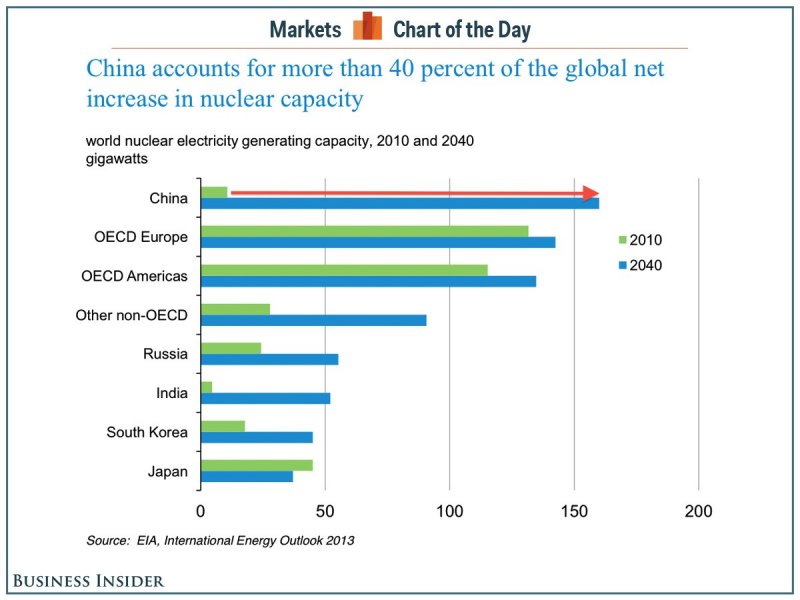 That's some astounding growth, and a black swan event like Fukushima is not going to put a dent in a transition that massive.

India and South Korea are on a similar trajectory.

And Russia may be a real player here...

Since the mid-1990s, about 18% of the global uranium supply has been provided by former Russian warheads being sold to the United States and converted for civilian use in electric power stations.

A nod to the swords to ploughshares movement, the Megatons to Megawatts program sought to turn a negative to a positive, cutting the world's nuclear arsenal down while proving cheap, clean power to the world's huddled masses.

But that was then, and this is now...

The program is set to expire at the end of this year, and we aren't expecting a re-up.

To put the program into perspective, Megatons to Megawatts has converted 400 metric tons of highly-enriched uranium from 16,000 Russian nuclear warheads into power for U.S. plants. That's enough generated electricity to power Boston for 730 years — no small potatoes.

Unfortunately, our relations with Russia are chillier than Khrushchev on ice skates right now...

Between the imminent bombing of Russia's staunch ally Syria and Moscow's harboring of American fugitive Edward Snowden, any and all cooperative agreements are fragile.

The Lights Must Go On

“Either the price of uranium goes up, or the lights go off.”

That's what billionaire Rick Rule has been saying for the past few months. And we have to agree with Rule's assessment.

Uranium is a despised commodity in the wake of the continuing horror at Fukushima. Overnight, supply dropped a whopping 10% as the future of nuclear power in Japan was called into question.

Prices dropped from $85 a pound to $40 a pound. At $40 a pound, miners cannot even meet production costs of mining the metal.

Have a look at the state of things now... 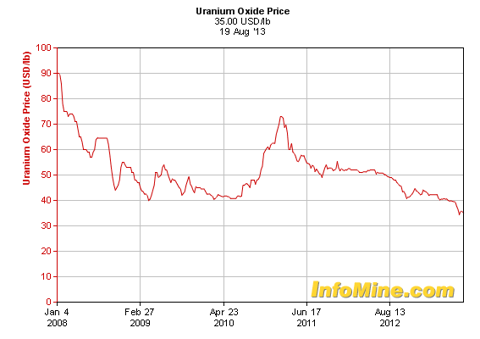 Right now, almost all uranium plays are trading at a huge bargain.

We're waiting to drop the hammer on a couple plays in the coming weeks, so stay tuned.