Cutting a check for an investor to spend on your behalf is nothing new.

That’s the essence of private placements. Same with hedge funds and a slew of other fringe investments.

Every once in a while, though, something else comes along where the devil is in the details. We’re seeing something today that's old but being resurrected in the equity markets, and it takes the flexibility to manage your funds to the extreme.

They functionally flip common knowledge about how to invest on its head — and have some questionable features built in.

Yet in a sign of the times, they saw a massive influx of money last year. There is no sign of the trend abating. Let’s take a quick, no-nonsense look at these beasts and consider their merits.

Would you write a check to Shaquille O’Neal with nothing in the "payable to" spot? How about Paul Ryan? How about Billy Beane, the Moneyball guy?

Well, you can now.

On the most basic level, a SPAC is a way to invest in a publicly traded company that has a singular purpose, although you don't know it quite yet — it will acquire another company that actually makes money after you invest.

It’s a clever way to be publicly traded without the same kind of regulatory disclosure that a real business requires.

Instead of an IPO, where share structure is established in great detail and then offered to the public, a SPAC raises money first. Then management goes out and finds a company to merge with.

This is essentially the same as the reverse mergers that Chinese companies, along with some smaller companies looking for access to large stock exchanges, have been doing for years.

Once your SPAC buys a real company, one that isn’t just a shell with a management team, it takes the public listing and stock ticker and runs from there.

Sound a bit shady? You bet. Plus, the history of SPACs hints at the potential for shenanigans.

Way, way back in the 1980s, blank-check corporations emerged and quickly developed a bad reputation.

They were so bad that the feds moved in and passed laws to reinvent them almost immediately. The question is whether the law is still enough to protect investors nearly 40 years later.

The short answer is kinda but not really. The longer answer is you should never consider SPACs the same way you consider normal market listings. Caveat emptor applies, but you don't know what's coming.

The protections implemented were pretty basic, the biggest of which is that individual investors were allowed to pull their money back out if they didn’t approve of the company the SPAC merged with.

In this case you can’t know, and your money will be held until the SPAC is committed to a singular company, with almost no guidance or guarantee on what it will acquire.

I know all of this is kind of strange to grasp. The inversion of how people normally invest is potentially catastrophic but could also give a lot of leeway to management you trust.

For example, Bill Ackman has a $4 billion SPAC now. He has a track record. Shaq and Paul Ryan, though…

And with the SPAC listings quadrupling from a mid-2000s flurry, there is a lot of buzz around these things: 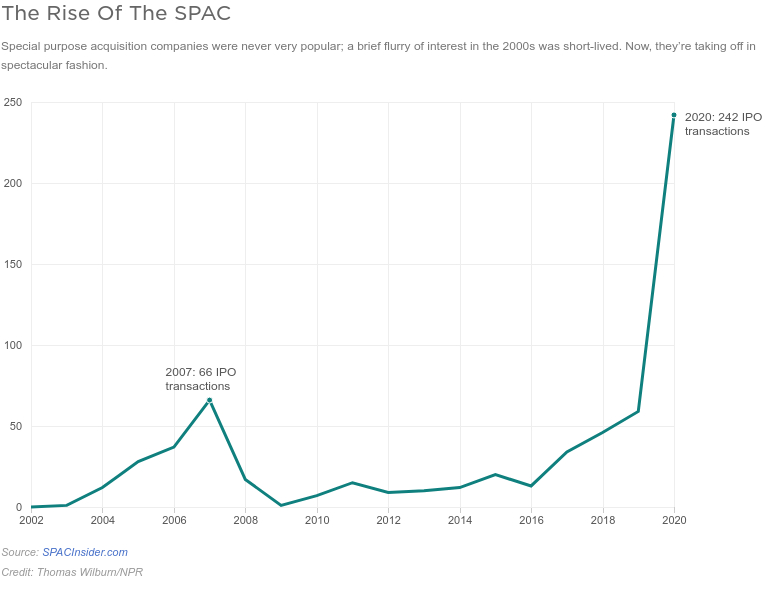 As Usha Rodrigues, a professor at the University of Georgia School of Law, told NPR, “The flip side of making things easier for companies is inevitably that the risk of fraud to investors goes up. I don't know any way to square that circle."

It isn’t just her — there is fundamentally no way to reduce risk before the SPAC makes a move on a company that you have no say in. Ackman has a solid reputation for high-risk, high-reward plays, and maybe it makes sense for any big players in his Rolodex to throw some money his way. If you need Shaq or Paul Ryan to be a spokesperson for your SPAC, though, I’d consider it heavily suspect.

And, as the old saying goes, “past performance does not guarantee future results.” Even the reputable investors have nothing to offer but a wink, a handshake, and a routing number to deposit your money in their account.

We’re in a strange time. The economy has never been more divided between the “haves and have-nots” — not only for wages but for access to high-quality investments with equal terms.

Among the minority of Americans that can afford to invest and try to build wealth, it is further divided by share structure, priority of trade execution, even share price, as your retirement or trading account provider lets wealthier clients cut to the front of the line.

Call me old-fashioned, but I like investments I can research and scrutinize. Going into 2021, that's more true than ever.

We came into 2021 with markets at an all-time high and a whole lot of risk being downplayed by the broader market. Deploy your capital carefully. Don't compound or complicate your risk even more.

There is a feeding frenzy going on, and if it is easier for someone else to spend your money, that guarantees it is harder for you to have a say in it.