One industry could help solve a lot of our problems...

I've heard plenty of people say that 2020 is a year to remember — but for many more, it's going to be a year to forget...

The COVID-19 pandemic has already cost us thousands of lives, millions of jobs, and added trillions to our national debt. In a heated election year, politicians from every side are scrambling to figure out how to repair the damage that the virus has done to the United States.

We'll be dealing with the aftermath for decades to come.

But there is an easy answer that isn't getting nearly enough attention: cannabis.

There are billions of dollars, millions in new state taxes, and hundreds of thousands of jobs ready to be deployed at this very moment. I believe that we will see states putting all of their weight into legalizing cannabis to solve the most urgent problems of our strange times.

If you didn't know already, cannabis is an extremely popular purchase during the COVID-19 lockdown...

Cannabis dispensaries have even been deemed “essential businesses” and have been allowed to remain open in most states.

And it shows: Colorado just hit a brand-new sales record, as the state sold a whopping $158 million in cannabis in June. July and August numbers should be even larger.

It's only a taste of things to come, as I'm expecting a sea change in cannabis legalization this year that will open up dozens of new markets and pump billions into the suffering economy... creating jobs, filling holes in states' budgets, and making cannabis investors a small fortune...

I'm sure we all have our own horror stories this year: losing a loved one, watching a child miss out on school, or — most likely — being laid off from your job. Millions of hard-working Americans have lost their livelihoods.

Many of these jobs aren't coming back anytime soon. However, the cannabis industry has quietly become the biggest job creator in the U.S. A new report from Leafly stated that the industry has created 243,700 full-time jobs already, and is poised to create thousands more in the places that need them: huge states like New York and Pennsylvania.

Take New York, for example. A 2019 report by Weedmaps found that New York State could add nearly 40,000 jobs while attracting tourists (and investors) if it were to pass recreational legislation.

And it's not only jobs that the country needs right now... it needs tax dollars — and lots of them.

Keeping New York as an example, Comptroller Scott Stringer forecasted a market that could generate $1.1 billion in New York City alone. That would equate to somewhere around $336 million in tax revenue for the city and $436 million for the state. 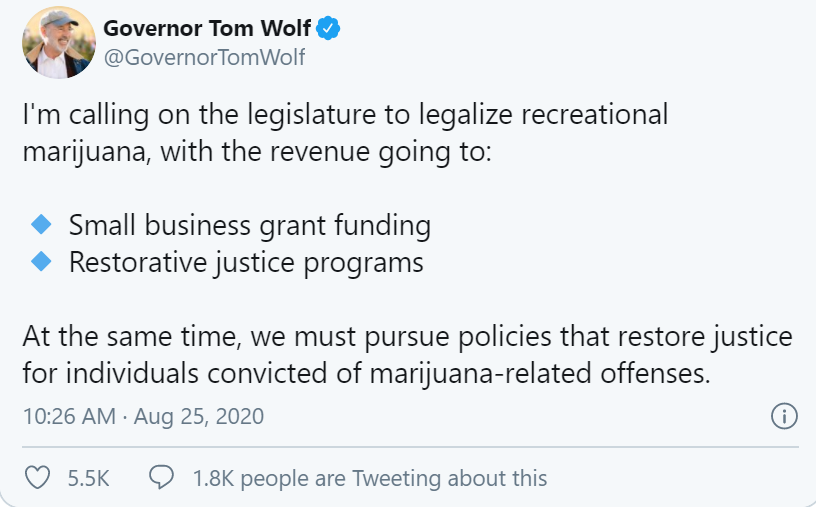 Keep in mind that Pennsylvania is the fifth-most populous state, and already has a medical marijuana program that will bring in half-a-billion dollars this year, and a cool billion in sales within three years.

It's also brought in millions in investment to the state already, with many of the companies that I cover already staking their claims.

Just imagine what the recreational market would do...

Politicians are finally following the economics and public support. It is already showing through in a typically stubborn Congress this year. The U.S. House of Representatives passed an amendment on July 30 that protects state-legal cannabis businesses from federal intervention.

Like I wrote last month, the amendment simply does away with one word: medical.

You see, until this passes, the law of the land is the Rohrabacher–Farr amendment passed in 2014, which has protected medical cannabis companies from being raided by the federal government ever since.

(I know it well, as I heard about it in detail from Rep. Dana Rohrabacher himself, as I drove him around D.C. last year in my Jeep.)

The new amendment could be even larger...

“This is the most significant vote on marijuana policy reform that the House of Representatives has taken,” NORML Political Director Justin Strekal said.

“The importance of this bipartisan vote cannot be overstated as today, nearly one in four Americans reside in a jurisdiction where the adult use of cannabis is legal under state statute. It is time for Congress to acknowledge this reality and retain these protections in the final spending bill.”

The writing is on the wall: recreational cannabis will be legalized bit by bit, regardless of what party takes the White House this year.

Here's how to invest before the last dominoes start falling...

I just got off the phone with the CEO of a Colorado company I've been following for a while. I can't divulge too much of our conversation here, but I will say that I'm incredibly excited about it.

It has flown completely under the radar but, quietly, over the last six months, it's been on an acquisitions tear, scooping up other U.S. cannabis companies left and right. Most recently, it acquired 13 new cannabis dispensaries in Colorado.

Remember, Colorado is breaking sales records every month and this acquisition will finally push the company into the green.

It doesn't only work in Colorado though — it has active clients in 17 different states and provides services to clients in Australia, Canada, Germany, and South Africa. It's not only quietly taking over the U.S., it's going global.

You need to take a look at this company before you start reading about it months from now.

All of the details are right here.