Behind the Scenes Gold Buying Frenzy

We all know it's been a hell of a year for gold.

Physical gold is up about 30%. Same goes for the SPDR Gold Trust ETF (NYSEARCA: GLD) as well, naturally.

Miners have been on a tear that puts those gains to shame.

While investors are flocking to gold, and the miners who are finding it and pulling it out of the ground, this is just the tip of the iceberg.

Behind the scenes, a similar buying frenzy is going on, and all signs point to it continuing for the foreseeable future, and bolstering miner valuations even further.

Following the gold peak of 2011, the long price slide set up a terrible environment for gold sector mergers and acquisitions.

Extraction costs were too high, debt burdens were the same. Cash flow was severely curtailed or negative, and all-share deals made little to no sense.

Several years later, the tide turned. We're now entering the third year of a $50 billion deal surge. And with gold prices surging this year in particular, the value of these deals is way up.

As Bloomberg recently noted, “The average paid in 133 transactions in the three months to June was $64 an ounce of gold equivalent in the ground, up from $36 in the first quarter of 2016”

Rising gold prices have alleviated much of the cash flow and debt burden the major miners have faced.

At the same time, renewed investor interest in junior miners with promising projects and claims has provided an ample source of much-needed capital.

The combination of these factors, along with the results of several years of fiscal discipline and some capital destruction, is creating an environment where pent up demand for new production is being unleashed.

Though they need to pay more than they would have a couple years ago for similar reserves, for the big names in the industry, the timing couldn't be better.

No Time To Wait

Significant gold discoveries are diminishing and the trend is accelerating. In the 1990s, 124 deposits containing 1.1 billion ounces of gold were discovered. Since 2000, this has fallen to 605 million ounces in 93 such discovered deposits. 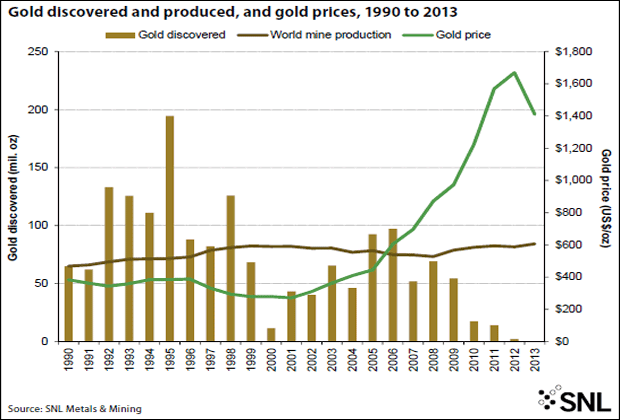 The 674 million ounces of gold discovered since 1999 could eventually replace just 50% of the gold produced during the same period, assuming a 75% rate for converting resources into economic reserves and a 90% recovery rate during ore processing.

All of this wouldn't be as much of a problem if it was easy to quickly turn a discovery into a producing mine in short order.

That simply isn't possible though. SNL discovered that the time from discovery to production has dramatically widened over the years.

There are plenty of reasons for this to happen, including greater costs from infrastructure and processing capacity due to lower ore grades, remote locations, and limited capital, an increasing need for more detailed feasibility reports, and tougher permitting requirements and studies of social and environmental impacts.

Regardless, it means one thing to major gold miners that are looking to boost production, and thus revenue. The current merger and acquisition spree has an ever-dwindling list of quality projects and companies to pursue. Competition is stiffer, prices are higher, and the clock is ticking.

The trick as investors is to establish positions in the highest quality junior gold miners before deals are announced.

This isn't solely due to the junior miners ETF outperforming physical gold and the larger market cap-focused, broader gold miner ETF. This is one area where small investors have a significant advantage over institutional investors.

Large investors are usually constrained by multiple factors. The funds they work for have limited mandates, there are minimum market caps and position sizes, and any position that could be established if the first two don't apply would create insignificant gains in multibillion-dollar funds.

Information asymmetry is always an issue, though. It takes experience to determine the quality of deposits and junior miner capitalization. Gold mining executives know their business. It's their full-time job. Everyday investors usually don't have the time to dedicate to it after their day job.

That's why the Outsider Club was lucky to bring Gerardo Del Real, with over a decade of analyst experience, on board this Spring. Since his first Resource Stock Digest Premium stock pick on May 18th, his precious metals portfolio is up over 43%.

Even the junior miners ETF can't keep up. It is up 26% over the same time period. Gerardo is outperforming it by 65%.

To get a look at the strongest junior miners, with the best projects and potential for acquisition, check out his research.