Battery Tech: A Stark Warning for Users and Investors

An intergovernmental agency formed in the wake of the oil crisis in 1973 is out with a new report that is sounding an alarm that cannot be ignored.

In short, the halcyon days are over.

The International Energy Agency released the report last week with the details. They aren’t pretty for anyone who buys or sells batteries, especially large battery packs for some of the fastest-growing applications like electric vehicles and large-scale electrical storage.

However, there is a flip side to the warning the IEA issued that investors should see as a call to action.

The long-term trend of scale of economy and manufacturing efficiency driving down battery costs is showing signs of reversing due to material scarcity and lack of investment.

Let’s get right to the heart of it. Costs are soaring for the cathode materials used in the most popular kinds of power storage and have been for a while. 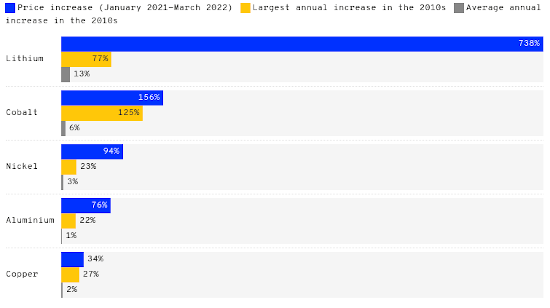 Here is another way to look at it. While cost has come down overall, the cost of cathode materials in batteries in particular is soaring. 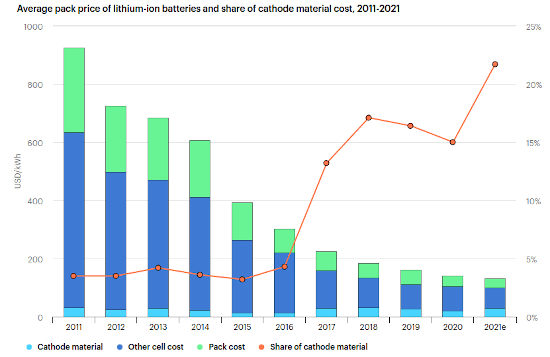 Clearly the trend has only accelerated this year, with lingering supply chain issues and the ostracization of Russia, which is a commodity powerhouse, adding additional cost. 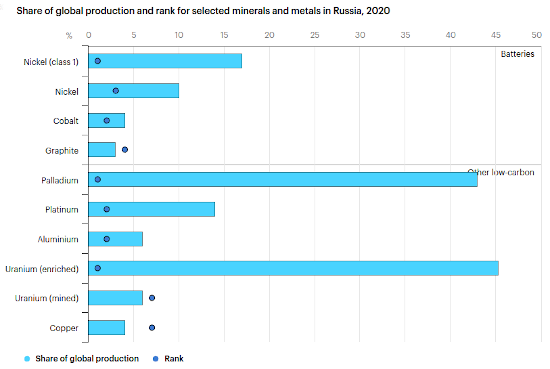 This issue was front and center when U.S. Secretary of Energy Jennifer M. Granholm chaired a meeting at an IEA meeting in Paris back in late March. Naturally, the carbon-based energy sources like oil and natural gas demanded a lot of attention, but the rising costs associated with carbon-neutral sources that can provide an alternative were the elephant in the room.

As Angus Taylor, Australian Minister for Industry, Energy, and Emissions Reduction, stated afterward, “Along with securing supplies of gas and oil, low-emissions technologies are essential to long-term energy security and are the cornerstone of practical emissions reduction strategies. An acceleration in the deployment of low-emissions technology will only be achieved by driving the costs of these technologies down.”

The rising cost of cathodes in particular is working against the goal set by 40 nations, including most of Europe and the U.S.

The short version of all of this is that demand, scarcity, chronic lack of investment, and geopolitics have the potential to break the trend of decreasing costs for batteries that both consumers and manufacturers rely on to feed ever-increasing demand — a trend everyone hoping for increased use of batteries is counting on.

The IEA report is worth citing one more time, specifically for the insane day in early March when nickel prices soared from $25,000 per tonne to $100,000 per tonne, and an unprecedented hold on trading was put in place for a week:

The event was a wake-up call regarding the importance of diversified supply sources. The recent episode also risks undermining investor interest in new projects and reducing trading liquidity at a time when both increased investment and liquidity are sorely needed.

Part of that diversification means moving battery production away from the metals that are traditionally used for cathodes.

Tesla is already making a big move. Ford is following Tesla. More battery manufacturers and buyers will as well.

We've covered why battery users should be very worried about this trend so far. Here is where investors should see it as a call to action.

A new, diversified batch of batteries is coming to circumvent the prolonged and unsustainable rise in costs. It'll drive fantastic gains as they reach price parity, and we'll all be better off with a much broader basket of materials to keep one of the most important trends in our economy and markets viable for decades to come.