Axis to Allies: Two Nations Are About to Transform

This new world is chaotic and leveraged to the hilt. It is also desperately dysfunctional.

Nowhere else it is more obvious than in two countries —both reduced to ashes in World War II. Both long since rising, phoenix-like, except in one key sector.

Finally, 80 years later, the mantle of history and shame are being shed in the face of necessity.

Let’s dive a bit into where Germany and Japan stand today, and what their new roles, and newfound roles, mean for what is to come.

I have been on a bit of a World War II kick. I’ll admit this is a long-standing, morbid fascination. Look no further than the last several articles here, here, and here.

How the times have changed. Tactics and strategy are wildly different in the wake of the Ukrainian invasion less than a month ago.

Nowhere else is that as obvious as with Germany and Japan. Both gun-shy after their roles in World War II, both massive economies that can and will soak up increased defense spending, and both on the frontlines of potential geopolitical nightmare scenarios.

So what has changed? Let’s dive in and start with Germany.

Europe has been basking in the post-Cold War glow. Complacent and adapted to a time that has passed, if it ever actually existed.

From my article on Feb. 24 of this year:

According to the World Bank, as a percentage of government spending the EU is around 2.85% as of the latest data (2020) and sinking back to all-time lows.

As a percentage of total GDP, the EU averages just 1.25% in spite of a NATO requirement to spend at least 2% that was put in place 18 years ago. 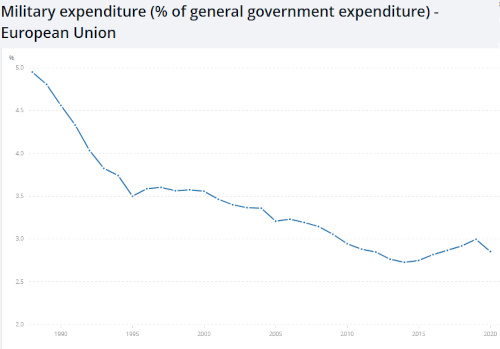 This lacks nuance. After all, not all EU members are equals.

Three days after Russia launched its invasion, Germany announced it would invest $100 billion. It also finally committed to the NATO requirement of 2% of GDP spending to defense.

Nothing tells why it is necessary more than that time German soldiers showed up with painted broomsticks instead of guns to a NATO drill.

So $100 billion is definitely needed. Plus exceeding 2% of GDP in defense spending will add just under $2 billion more per year based on 2020 numbers. As such, this spending is just the start. But it is a BIG start. Total EU defense spending among all states was about $225 billion in 2020.

With that announcement came a massive promise, without a signed contract to be clear, to buy three dozen F-35 warplanes. With it will eventually come spending on small arms, ammo and armament caches, and armored vehicles that won't lead to a lot of news headlines, but is direly needed. Refer to the image above for why, especially as a war of attrition evolves in Ukraine.

Again, I can't stress this enough. Germany single-handedly committed to increasing the EU's defense spending by nearly 50% in one fell swoop, though the spending will spread over several years.

Across the globe, Japan is also on a new path....

For decades, it was great at arming itself with a select mix of U.S.-based designs that had many domestically produced components. The Mitsubishi F-2, a derivative of the F-16 Falcon produced by (you guess it) Mitsubishi and Lockheed Martin in a 60/40 split, stands out as an example.

It's committed to send aid, though not particularly offensive in nature, and to take in refugees, which it never really has. What is clear is that Japan is seeing that an aggressive country (read as China — always China in the Pacific) can raise Hell itself before even the most stalwart allies can provide aid.

It committed $200 million in support to Ukraine. It joined in sanctions, which it normally does in a passive way as it follows the U.S.-based banking system for its banned list. It even diverted at least 210,000 tons of liquefied natural gas to Europe even though it has been paying through the nose for at least a year, and it's getting worse.

And though it is far overshadowed by its World War II aggression in China, especially Manchuria, there are echoes of the turn of the 20th-century Russo-Japanese War in the mix. And of course, Taiwan, and the perpetual risk that the West will let more Pacific ocean islands fall under control, as China aggressively occupies them and harasses military and civilian ships and planes alike.

Japan's defense budget has increased 10 years in a row and will hit $47.18 billion in 2022. Again, F-35s are in the mix, along with the first plans to contribute to a mostly domestic jet fighter program in three decades.

This is the new normal. Old, reluctant enemies, long since onboard with cooperative economic measures, are committing to joint defense.

The old axes in World War II are becoming the new stalwart allies. Times are changing, the world is arming, and we'll need all the friends we can get.

P.S. — Outsider Club editor Jason Simpkins is far better equipped for the in-depth implications of what is to come with the newly surging defense spending worldwide. Plus he has a new package of information for anyone that wants it that should drop next week. If you want first dibs on the info, just drop your email address in here and we'll keep you posted as soon as anything and everything is available. 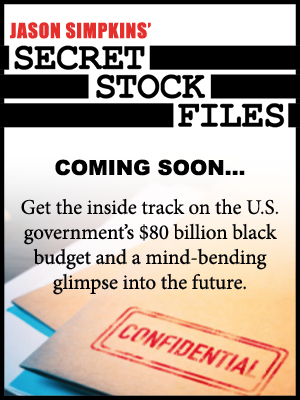