Am I Being Paranoid?

I was leaving a restaurant recently with a couple of colleagues when the thunderous chopping of helicopter blades disrupted our leisurely stroll.

I should tell you that living in Baltimore, I'm somewhat desensitized to police helicopters... So I wasn't too alarmed.

That is, until a large black military-style vehicle screamed up alongside several police and Department of Homeland Security vehicles. When I asked a local police officer what was happening with the ominous tank idling a few yards away, he shrugged and said he didn't have anything to report.

And as far as I can tell, the incident wasn't covered in the paper. I couldn't find any evidence of it on any local crime blotters.

The powers that be obviously knew something I didn't — and I'm not writing this to speculate on the nature and necessity of that particular operation...

What does concern me, however, is the continued militarization of our police forces. D.C. lawmakers have lavished states with over $34 billion for local law enforcement in the past 10 years.

Let's take a look at what our federal tax money has purchased, and I'll let you decide whether or not I'm being paranoid...

Fargo, North Dakota, is a place so crime-free that more people were killed in the movie Fargo (7), then are murdered annually in the peaceful community (2).

But that's apparently enough for authorities to deck out their vehicles with gear that would make RoboCop blush. From Andrew Becker and G.W. Schulz at the Center of Investigative Reporting:

Every city squad car is equipped today with a military-style assault rifle, and officers can don Kevlar helmets able to withstand incoming fire from battlefield-grade ammunition. And for that epic confrontation — if it ever occurs — officers can now summon a new $256,643 armored truck, complete with a rotating turret. For now, though, the menacing truck is used mostly for training and appearances at the annual city picnic, where it’s been parked near the children’s bounce house.

A South Carolina Sheriff has happily dubbed this "the Peacemaker," sure to delight impressionable children at picnics all over the country: 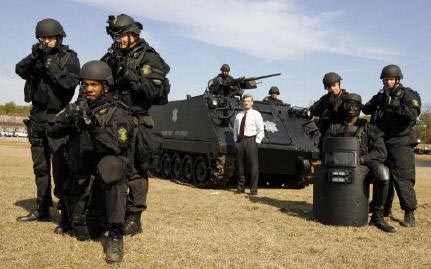 And I don't know what's more alarming: the intimidating nature of full-scale military vehicles for police use, or the fact that these expensive vehicles are just being used to entertain kids at annual city picnics (I think a couple of swing sets and a basketball hoop could do the trick without spending millions in tax dollars)...

Which is why you're reading this coverage in a financial newsletter. This entire phenomenon is giving birth to a brand-new, taxpayer-funded industry that Radley Balko, a leading authority on paramilitary policing in the United States, has dubbed “the Police-Industrial Complex”...

DHS grants are lucrative enough that many defense contractors are now turning their attention to police agencies -- and some companies have sprung up solely to sell military-grade weaponry to police agencies who get those grants. That means we're now building a new industry whose sole function is to militarize domestic police departments. Which means it won't be long before we see pro-militarization lobbying and pressure groups with lots of (taxpayer) money to spend to fight reform. That's a corner it will be difficult to un-turn. We're probably there already. Say hello to the police-industrial complex.

In his seminal report "Overkill: The Rise of Paramilitary Police Raids," Balko outlines the many ways our rights guaranteed in the Posse Comitatus Act have faded into the horizon, and given way to these types of militarized police raids.

Balko attributes the growth of militarized police to the advent of the SWAT team in Los Angeles in the 1960s. SWAT was originally supposed to stand for "Special Weapons Assault Team," but according to the police PR team, it sounded too much like a military organization. Imagine that.

Gates changed its expanded form to "Special Weapons and Tactics," which had a gentler tone. It was created for controlling situations like the Watts Riots and shoot-outs with terrorist groups like the Symbionese Liberation Army...

Yet the program mushroomed from there, as more and more local police departments started loading up on military-grade weaponry for traditional police missions like raiding drug houses and serving warrants.

The National Journal reports that between January 1997 and October 1999, the agency handled 3.4 million orders of Pentagon equipment from over 11,000 domestic police agencies in all 50 states. By December 2005, the number was up to 17,000. The purchase value of the equipment comes to more than $727 million. The National Journal reported that included in the bounty were 253 aircraft (including six- and seven-passenger airplanes, and UH-60 Blackhawk and UH-1 Huey helicopters), 7,856 M-16 rifles, 181 grenade launchers, 8,131 bulletproof helmets, and 1,161 pairs of night-vision goggles.

And keep in mind, this was all before the advent of drones (an article for another time).

What are the police doing with all their new toys?

Here's a quick rundown of some of the worst militarized police abuses, courtesy of the ACLU:

You'll notice a trend: None of these situations were high-stakes hostage scenarios, riots, or immediate terrorist threats that would have required such heavy artillery...

It's because of gross overreaching like this that the ACLU has launched an investigation into exactly how armed certain states and cities are, and exactly how and from where they get their funding.

"We've known for a while now that American neighborhoods are increasingly being policed by cops armed with the weapons and tactics of war," Kara Dansky of the ACLU's Center for Justice noted. "The aim of this investigation is to find out just how pervasive this is, and to what extent federal funding is incentivizing this trend."

The Outsider Club will be following their investigation and will let you know who is really profiting from this madness.

As usual, if you follow the money, you'll find the answers...

Jimmy Mengel for The Outsider Club