All the Big Guns Are Betting Big on Gold

Gold is within spitting distance of all-time highs, about $100 per ounce shy of $1,920 and change.

With the strong rise over the past year, especially after the coronavirus lockdowns kicked in, some investors may be feeling a bit hesitant.

Don’t be. Don’t just listen to me though. Some of the biggest names in the market are lining up behind a surge that will leave the all-time high far behind.

From the smallest retail investors to the largest financial institutions, virtually everyone is now betting on much higher gold prices. Some surprising new big names just jumped on board.

The latest to jump on board is Citigroup, which just confirmed it sees gold breaching the previous high this year with a good chance of it going over $2,000 per ounce.

Of particular note is something that is easy to ignore if you just pay attention to U.S.-based gold news.

The analysts noted in the Citigroup report: “Nominal gold prices have already posted fresh records in every other G-10 and major emerging market currency this year.”

They also added that they expect silver to do well. It just touched four-year highs and Citi sees it going to $25 in the next 6 to 12 months, and possibly $30 in the bull case model.

Bank of America is already on board. Last month, Bank of America Chief Global FICC Technical Strategist Paul Ciana — for his sake I hope his pay is proportional to his title length — stated that he sees the potential for a wave pushing gold prices into the $2,000s with an upside scenario of $2,114 to $2,296.

The big three investment banks — Morgan Stanley, JPMorgan, and Goldman Sachs — have been on the trend for even longer.

Move up to central banks and the sentiment is strong as well. According to the 2020 Central Bank Gold Reserves, published in mid-May:

20% of central banks intend to increase their gold reserves over the next 12 months, compared to just 8% of respondents in the 2019 survey.

79% of respondents view gold’s performance during times of crisis as an important reason to hold gold, up from 59% in 2019.

74% of respondents consider gold’s lack of default risk to be an important reason for holding the metal, up from 59% in 2019.

88% of respondents say that negative interest rates are a relevant factor for their reserve management decisions.

The gold demand surge is coming from every category of investor, from mom-and-pop buyers, to institutional and private funds, to central banks.

No talk of demand would be complete without a look at the other side of the equation. Just ask oil investors how a supply glut works out.

For gold, there is no risk whatsoever of this surge in demand being diluted by a flood of bullion entering the market. 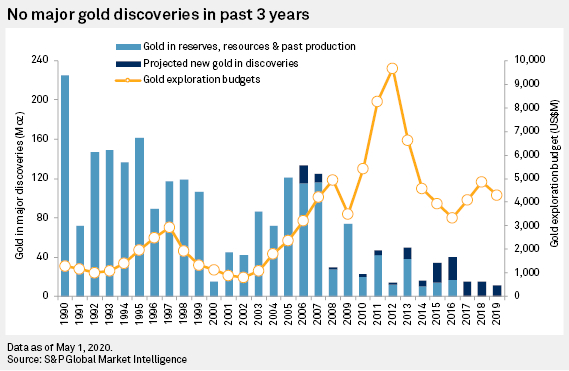 We’re coming off a decade of incredibly low levels of gold discoveries. With mines taking upward of a decade to be developed, there is no capacity to respond to this new surge in demand.

That makes gold miners incredibly strong investments, with one, in particular, standing out.

Outsider Club Founder and President Nick Hodge has spent years tracking one small miner that is sitting on what will become the biggest gold mine in America.

It is still flying under the radar, but that won’t last for long with all the demand that is coming. I’ll let Nick explain the historic opportunity.