Airlines Are a Mess. Here Is Part of the Solution.

If you're like me, you haven't set foot in an airport in almost two years.

When we eventually do, we'll enter a whole new world. It'll look a lot like the one before, but it will be fundamentally transformed.

The way things are looking, some airlines might not be around anymore. I wouldn't be surprised if we still see even more government-brokered bailouts similar to what we saw in the last two recessions, but that's a topic for another time.

The changes I'm referring to are all related to technology, and they may be our only hope to save private-sector air travel as we know it.

Back in mid-March 2020, a nightmare scenario was unfolding at O'Hare, one of the busiest airports in the U.S. People were stuck in lines with no end in sight, packed in like cattle.

They had no idea why, outside of screening for the new virus, or what was required of them. 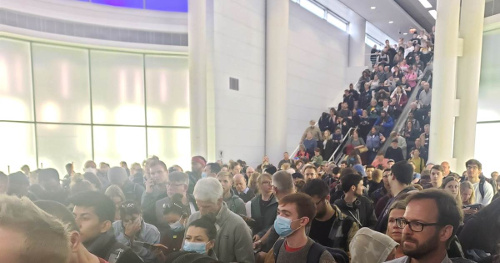 Passengers waited in one line just to move to another. Some reported waits of up to five hours, all in situations like the one above.

There was no separation between those who may have been exposed and those with the highest risk of infection or complications.

Yes, a lot has changed since then, but the fundamental reality of our current situation is that our airports are not built to handle the new safety measures with the kind of passenger volume that airlines need to stay viable. That is just the start of the issues they face.

Now all the airlines and the TSA are racing to compensate for the countless thousands of workers they laid off. Flights are being canceled constantly, creating a cascading effect for passengers, refunds, transfers, and crowded terminals.

Passengers are waiting hours to clear check-in lines and security checkpoints only to find their flights canceled.

Airports and airlines are facing the same problem that many service-based companies are having right now. They can't get enough workers back in place.

Quite frankly, I have little sympathy. Airlines returned over 90% of free cash flow to shareholders in the good years, in spite of knowing that their business is extremely capital-intensive and cyclical. Sure, they can count on being too big to fail, but they can't count on getting all the workers they cut to come back. And for good reason — no one wants to see a crippled transportation system, especially when ground-based systems are so atrociously bad.

That is destroying airliner rebound profit potential right as they need the extra cash flow to reinflate their payroll and flight schedules, and it may not appreciably change for years. Tech can help a lot though, and it already is.

Some of the new tech is obvious. Cleaning robots using high-pressure water and disinfectant sprays coupled with UV-C light to eradicate any microbes. Airports were already investing in touchless tech to speed up boarding. Now that is going into overdrive. These will continue to play a major role, but this is the easy stuff to address.

The real potential is in the choke points that used to require a heavy, and highly-paid, human presence. Facial recognition will be used in place of tickets and possibly even passports. We'll use more mobile apps and there will be more interactions between our personal devices and airport and airline computers.

Quietly, behind the scenes, another layer will be in use by airport staff and the Department of Homeland Security.

It will involve scanners for potential weapons, including biological and chemical.

It will also add scanners for body temperature and other biometrics.

Some of these security measures are already in use around the globe in major hub airports, but they will expand to every airport in short order.

I cannot stress this enough — airlines are at a breaking point due to a lack of workers and automating any task, especially ones that normally take time, is essential to getting back to profitability.

This is hardly limited to airports, though. These technologies will move to any public space where a whole lot of people need to be in the same space while quickly moving along with as little contact as possible.

Think stadiums and other sports venues, hotels, courts and other government buildings, border checks, and even schools. Everything that is opening up right now but is sorely understaffed and facing far higher hurdles to stay safe and placate both customers and government mandates.

The implications are both ominous and profound. If this virus is here to stay — and I do think we crossed that point months ago — this will be our reality and shared experience.

Now that we’ve all had a taste of an outbreak, as a society we won’t tolerate a repeat anytime soon. As bad as things are, we are taking a relatively light hit compared with outbreaks like the Spanish flu or, God forbid, viral hemorrhagic fevers.

This tech trend has already started. Big Tech has dumped billions into it already. Hundreds of billions more are on the way.

And in typical fashion, the big companies see no reason to do it themselves. After all, there are a lot of startups that hold patents and have years of experience developing these new systems already.

Outsider Club editor and head of Wall Street's Proving Ground Jason Simpkins has been at the vanguard of investors in this trend that is rapidly accelerating to fill critical gaps in our new normal.

To get a sense of what is coming and what companies have the kind of decisive advantage to capture this massive new market, you should see what Jason has to say.