A Smuggler's Life for Me

Contraband profits from a most unlikely source...

With sweaty, shaking hands, I checked in for my 6 a.m. flight from Baltimore to Copenhagen. I was nervous. That’s because inside my worn leather messenger bag was a smaller plastic bag filled to the brim with white powder, tucked into a secret compartment. It was my first time smuggling illicit substances out of the country.

My heart was racing as I stood in the security line. I tried to act natural as I removed my laptop, belt and shoes. I awkwardly smiled at the TSA agent. He nodded back agreeably. The luggage was scanned, the agent wished me a safe flight, and I made my way through. Once I got to my terminal, I reached into my bag and sighed.

Now, before you go thinking that I’m some family cocaine kingpin, allow me to add some much-needed context to this story...

My grandmother had always wanted to go to Denmark. She had a fondness for Scandinavian countries in general and had lamented to me several times over the years that she wished she had visited the Kingdom when she was younger. As a child, Grandma Joy read me Hans Christen Anderson stories like “The Emperor's New Clothes” and “The Steadfast Tin Soldier.” As a young man, my Grandmother and I spent many nights in deep conversation about the meaning of life, often quoting famed Danish philosopher Søren Kierkegaard.

It was kind of our thing.

Sadly, my grandmother passed away a month before my trip. It was just the two of us, alone, when she died holding my hand. She was never able to visit Denmark while she was alive. So I figured I might as well do the next best thing. If you haven't figured it out yet, the white powder in my bag was my grandmother’s ashes. After she was cremated I decided it was an act of fate that I happened to be going to Copenhagen to speak at an investor conference and — hell or high water — I was going to bring her with me.

I ended up scattering her ashes on Kierkegaard's grave in Assistens Cemetery, where Hans Christen Anderson is also buried. 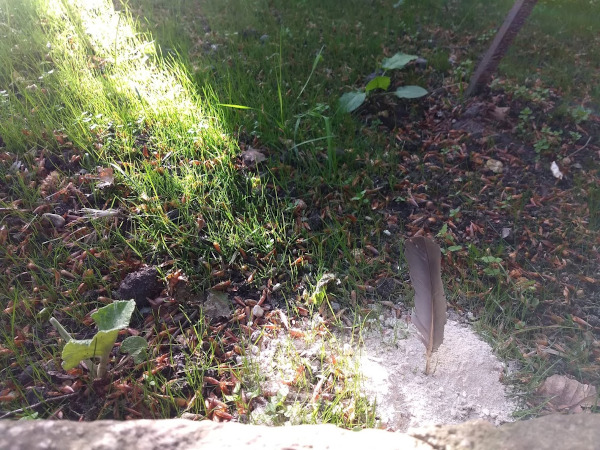 It was a beautiful day and a beautiful moment. The feather you see above floated down at the exact moment I was scattering the ashes. I’m glad she got to visit Denmark after all.

If you want to hear more about my Grandma, here’s a free issue of The Crow's Nest that celebrates her. If you like it, please consider subscribing.

But I’m not here to wax philosophical about the nature of life and death. There is another kind of smuggling that is going on right now that is far less existential, but far more profitable for investors...

It was just reported that a new band of smugglers have been caught operating out of China. They aren’t smuggling drugs, donor organs, and certainly not cremated ashes.

They are smuggling something that is completely legal.

I’m talking about computer chips. Talk about a nerdy thing to smuggle.

In any case, due to the massive semiconductor shortage around the globe, smugglers have found it profitable enough to risk their lives and freedom to move these chips across borders far and wide. They have even taken to strapping them to their bodies as if they were heroin.

Last month in Hong Kong, the Customs Department seized two drivers attempting to cross the Hong Kong-Zhuhai-Macao Bridge. According to reports, they were “acting suspiciously” — rookie mistake — and they were busted.

256 Intel Core i7 10700 and Core i9 10900K CPUs, vacuumed to their chests and calves with cling wrap. Pardon my dad joke, but that is some hard wear. This wasn’t the first — or last — case of semiconductor smuggling. A mere 10 days before, 52 Intel chips were confiscated from some seat cushions. All told, the amount of contraband only totaled around $128,700.

In another instance at the Lok Ma Chau Control Point, over 2,200 CPUs were discovered along with other electronics and totaled $4 million.

Considering the depth of the semiconductor shortage, which is disturbing automotive and computer companies worldwide, this type of smuggling will most certainly continue. Thankfully, here in the U.S., there are companies that are back to producing with the full support of the U.S. government.

Last month the Senate — in rare bipartisan fashion — passed the Innovation and Competition Act of 2021. It will allow the U.S. to step up our semiconductor industry in the face of mounting Chinese domination. Currently the United States has but 12% of the world’s production capacity.

The bill would give $52 billion in aid to the semiconductor industry and $39 billion to subsidize new factories here in the United States.

I know one place where that money will be flowing...

There’s no smuggling needed to pick up these semiconductor profits. You just have to buy this stock.