Maybe this year will be better than the last...

Here comes the long, cold slog through what is going to be a brutal winter.

The election is behind us, for better or worse. There is talk of a truly effective vaccine from Pfizer and its partners. There are some glimmers of hope in economic data.

As the Counting Crows song goes, “maybe this year will be better than the last.”

We’re not there yet, and there is a lot more for us to go through.

Now that the big news is out of the way, here is a look at some of the things we’ll be seeing over the next several months.

The “Economy” Voted For Biden, but…

Reuters has an article out today about how the "economy" voted for Biden.

In the way they phrase it, yes it did. But it feels pretty gimmicky.

As they note, 70% of U.S. GDP comes from counties or cities that overwhelmingly vote for Democrats. 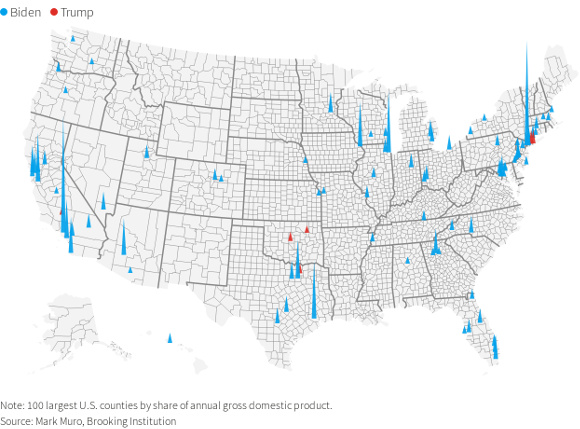 This should not be a surprise, though every general election I see some variation of dismay and disbelief that so much of the nation can be painted red with a Democrat still pulling in so many electoral college votes. That is just a function of population density. So is economic output.

So yes, areas that voted overwhelmingly for Biden account for a large majority of the economy, but the same areas considered the pandemic a far bigger concern.

These are the same areas that are being forced into new lockdowns as the number of new infections goes hyperbolic nationwide.

Expect exacerbating economic woes for the whole country and a large risk of an economic double-dip in the coming months.

The vaccine efficacy announcement was good news, for sure, but it will be a long time before any of us actually have an opportunity to get it, let alone for it to affect the bigger picture.

That will dash the hopes of what little silver lining can be found on economic data we're seeing these days, and it isn’t going to stop any time soon, probably until the second quarter of 2021 at the earliest.

The Stock Market “Voted” For Biden, but…

While the economy is not the stock market, and vice versa, that's our bailiwick after all.

It seems that it too issued a large vote of confidence in Biden as president with a massive upward surge starting last week and running through Monday.

It’s settling down today and it will continue to do so. The election was part of it, the vaccine news was as well.

But as I discussed last week, once the rumors are settled and the news is old, investors move on. We’re just starting to see that now, and it will continue through the winter as nothing big changes.

The only catalysts for strong moves up in the near-term are a new stimulus bill and positive changes in the vaccine timeline. The list of downward catalysts is too long to cover.

That surge was triggered by what looks like Biden winning but it had more to do with something most people seemed to neglect as a very real possibility. With Republicans looking like they can just muster a Senate majority, investors see a mixed government stuck in deadlock.

Yes, the stock market seemed to react positively to Biden as the presumptive President-Elect. However, it reacted positively to an especially weak start to any Biden presidency.

There is a lot for us to worry about, both good and bad.

I hope you’re the kind of person who likes the bad news first. That’s what we’re going to be getting for sure. That doesn’t mean that we need to be overly cautious, at least as far as the stock market is concerned, but we need to accept that the good ol' days of broad stock market gains that persist may be gone for the foreseeable future.

It is a good time to stay in the bulk of your investments, hunker down, and weather a long and rocky December and winter. That doesn’t mean becoming a completely passive investor though.

Major disruptions cause major changes and changes create opportunities — something the stock market has been kind of lacking for years now.

Keep hedges on. Gold has pulled back but companies are still looking a lot better than they used to, and gold investors seem to like gold above $1,850 per ounce.

A new stimulus of some kind is coming. I have no doubt about that. But the market is still fine with a massive expansion of the monetary base and government debt. For now.

And the more tumultuous the economy is the more it shakes up the status quo. It's looking like we're in the setup for a stock market that moves sideways and is more responsive to smaller catalysts. That's a stock picker's dream and we're talking behind the scenes around here about what that can mean for us and our portfolios.

As Planet Money featured this morning, start-up activity — as indicated by new employer tax ID listings tracked by John Haltiwanger, an economist at the University of Maryland — is the highest we’ve seen since 2004 when he started tracking them.

So much that we can capitalize on is in the works. We just need to get through several lean, cold months to get there. Plus, we can take our time, do the due diligence, and set up trades that will capitalize on them.