It's Time to Make History

My mother asked me my “expert opinion” on smoking marijuana this week.

I couldn’t help but chuckle.

If you would have told me in high school that my mom would be asking me for marijuana advice, I would have died laughing. Over the course of my youth, she flushed more weed than pet goldfish down our family toilet.

However, she wasn’t asking for my advice on how to roll a joint. She was serious about the medicinal properties that the plant offers. Maryland recently became one of the 30 U.S. states that allows marijuana for medical purposes, and she was intensely curious about what it actually does.

She hasn't been the only one asking for my advice on cannabis lately. In fact, almost everywhere I go, somebody wants to pick my brain about investing in cannabis and how it could help them with their health.

I recently chatted with a nurse and she asked what I did. When I mentioned that I researched the legal cannabis market, she was floored.

In her years of nursing, she had witnessed a rapid increase of painkiller use. She told me how she watched her patients practically become zombies after their prescriptions had literally taken over their bodies. She was praying for something better and mentioned the serious interest she had in cannabis-based medications to help.

I spoke with a fellow father and — after discussing the trials and tribulations that come with raising a six-year old — we also got onto the topic of medical marijuana. He had experienced serious anxiety after he had his children, and was prescribed Xanax. It made him feel absolutely nothing. Not sadness, not anxiety — but no happiness either. He felt devoid of all emotion.

When I told him that certain companies were already developing anti-anxiety drugs based on cannabis, he said “By the grace of God, I hope they get here soon...”

Now — if giving my mom marijuana advice weren’t enough of a shock — my dear grandmother, who is now 86 years old, e-mailed me this week asking if I could tell her how she could use cannabis to help with the slings and arrows of old age.

I was more than happy to oblige...

I sent her an entire report I wrote about all of the ailments that medical marijuana is proven to help. I’ve done years of research on medical cannabis — not just for investing, but for health as well.

I’m sure you or someone you know suffers from one of them:

It reads like the alphabet... and the list goes on and on. As you can see, the possibilities for medical treatment with cannabis cover almost everything you could think of. And for investors, this could be one of the biggest new markets we’ve seen in decades…

Aside from the obvious human element of helping people safely, cheaply, and efficiently deal with some of the worst diseases known to man, the investment opportunity of medical marijuana is unparalleled.

Just look at the projected growth in the U.S. alone: 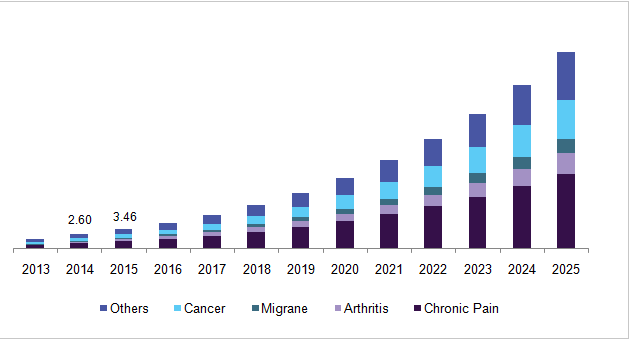 Medical marijuana is the next big market, not just in the U.S. and Canada, but across the world.

Germany legalized medical marijuana last year for seriously ill patients. It will also allow health insurance to pay for it, which is a huge step forward for the industry at large. Also consider that Germany has a population over 80 million, whereas Canada has around 36 million.

The population combined with the offer of insurance payments on medical cannabis could set Germany up to be one of the world’s largest medical marijuana markets. Some analysts see it becoming the number-one market in the world for medical cannabis.

European countries like Austria, Belgium, Croatia, and the Czech Republic have also relaxed laws for medical cannabis. All told, the medical marijuana industry is projected to reach $55 billion by 2025, according to a new report from Grand View Research, Inc.

I want to make sure that you get a piece of the action. That’s why I’m flying to Washington state for our first ever live medical marijuana summit, and I want you to join me, free of charge…

Next Wednesday, I’m going to sit down with Outsider Club founder Nick Hodge and explain everything you need to know about the coming medical marijuana boom and the best ways you can position yourself for life-changing gains on a life-changing medical breakthrough. This will go down as a historic event...

On August 1st, I’ll be revealing my top medical marijuana stock pick, which should take off as medicinal cannabis gains wider and wider acceptance. I’ll also share my “POWER 3” marijuana-investing steps so you can begin investing immediately.

Click here to reserve your seat. As a token of my appreciation, I’ll even give you a complimentary stock pick from my Marijuana Manifesto newsletter as soon as you make your reservation.

If you’ve ever had any questions about investing in marijuana, or simply want to know how medical cannabis could help you or a loved one, you can’t afford to miss this historic medical marijuana summit.

I hope to see you there.