A Front Row Seat to Our Doomed Future

“Finance is sinking into the ocean. There’s no escape from a market crash in the future when you have such enormous debt.”

Take one guess as to which country a top ex-George Soros advisor is talking about...

Not an easy task, is it?

The list of contenders is depressingly long these days, and the United States belongs near the top of anyone's short list.

These words were spoken by Takeshi Fujimaki about Japanese markets and bonds. But Fujimaki could very well have been describing the United States.

In fact, the Japanese and U.S. economies are facing the same challenges: falling revenue and ballooning social costs in aging populations... stagnant wages and rampant unemployment... and perhaps worst of all, alarming debt that has to be constantly managed through rotating bond sales...

The United States isn't in the same boat as Japan (not just yet), but we're sailing down the same course.

And what Fujimaki sees happening right now in his own country is giving us a glimpse into what Uncle Sam likely faces in the not-so-distant future...

A quick refresher is in order to make sure we're all on the same page...

Prime Minister Abe swept into office with the promise of radical reform through quantitative easing and a corrupted form of Keynesian counter-cyclical spending. To achieve this, he strong-armed the Bank of Japan (BoJ) into following his proposal to buy debt through bonds, dramatically expand the amount of yen slushing around in the economy, and target a 2% inflation target.

On April 4, 2013, the BoJ said it would double monthly debt purchases to 7.5 trillion yen (about $76 billion), or roughly 70% of planned bond issuance. The monetary base will grow to 270 trillion yen by the end of 2014. This is an absurd 44% increase from the $150 trillion yen when the announcement was made.

Fujimaki had this to say: “By expanding the monetary base to 270 trillion yen, the BOJ is making a huge bet which I think it will ultimately lose. [The head of BoJ's] QE announcement is declaring double suicide with the government. The BOJ will have to share the country’s fate and default together.”

That is actually pretty tame compared to what the Fed has done here at home. We have the same inflation target. We've seen a 400% growth in the monetary base through QE so far. To add insult to injury, the Fed has been buying up to 90% of new U.S. debt through bonds.

The Japanese government and BoJ aren't the only pair setting up a "double suicide"...

What's the difference between the two countries right now?

Our ratio of debt-to-GDP isn't quite as high as Japan's, yet it is rapidly approaching levels only seen in Japan and European countries that have already imploded. Without changing course, we will ultimately be in the same place as Japan within a couple decades.

So, what can be done?

Put simply, we need to abandon the Keynesian model — and as quickly as possible.

Keynes Would Be Appalled

The problem with the Keynesian policies being implemented today is that politicians have consistently failed to use it correctly, and they are sowing the seeds of our own destruction as a result.

I'm no advocate of Keynesian policies, but politicians and central bankers aren't, either. They're only getting half of it right — and abandoning the half that makes the model theoretically stable...

Keynes' theory suggested active government policy could be effective in managing an economy through countercyclical behavior. Part of this involves government intervention in interest rates, and by spending more during a recession. The other half — the one missing from Japanese and American policies and quantitative easing — is suppression of inflation in boomtimes by either increasing taxes, or cutting back on government outlays.

Essentially, during the good years, the government should be countering the broader economy and saving money for the lean times.

Take a look at debt compared to GDP. Up until a couple years ago, it only dropped when the economy grew faster than government spending: 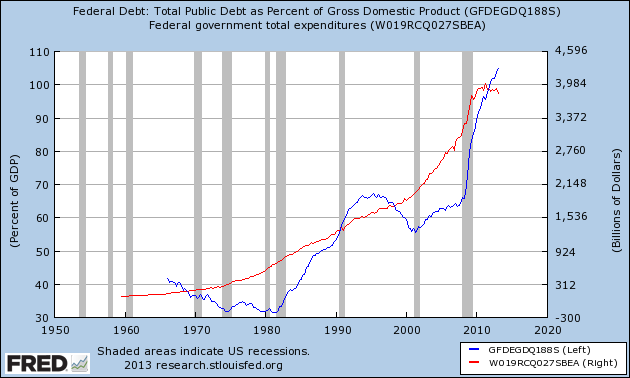 And we aren't seeing any countercyclical activity until you get to the last couple years, where we've had Republican efforts to curb spending growth.

In this sense, you might say Republicans could be trying to enforce the full Keynesian model that Democrats claim to embrace, although that is hardly their goal. 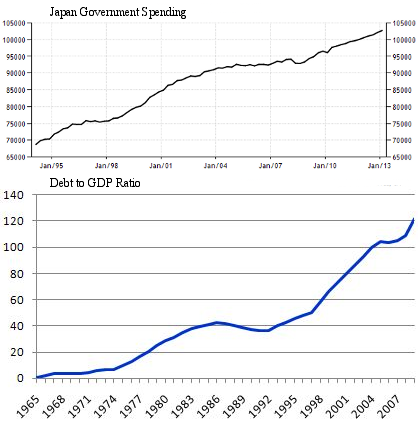 The historical data from Japan is basically the same, as you can see in the charts to the right.

If politicians in either country would just realize that they can't have the spending half of Keynesian economics during rough times without the savings during good times, we wouldn't be in this mess...

Keynesian policies are impossible to adopt after building such massive debts.

That is precisely why Fujimaki and countless other economists and professors are sounding the alarm and abandoning Japanese investments.

The United States and Japanese governments have spent decades ignoring how countercyclical spending and policies work.

We have too much debt now to implement Keynesian spending during rough times when we never bothered to create any padding for it in our ledgers.

It's for this reason researchers from Goldman Sachs and Societe General are revising interest yields forecasts for Japanese and American bonds significantly higher, and releasing notes to carefully watch bond yields for further spikes.

The market cannot stomach this kind of spiraling endless debt much more.

Creating more risk in the market sends shudders through the entire world. We'll see proof through exponentially sky-rocketing yields when we cross the line. But by then, it will be too late.

If and when Japan crumbles, we'll have a glimpse into our own future if we continue to spend. And the sad truth is U.S. officials may have to watch Japan implode to realize where we will be in a couple decades if we don't change course now.

However, there is still time to stave off a disaster...

If you're a Democrat, vote for politicians who embrace the full Keynesian model. If you're a Republican, elect officials who follow through on their pledges.

If both sides of the aisle in Congress act in accordance with their party's stated economic plans, we could see spending reined in through bipartisan budgets before it is too late.