Last week, I flew into San Francisco to deliver the opening speech at The MoneyShow. It's the premier investment conference in the U.S. and Canada. Everyone from academics and newsletter writers like Mark Skousen, to rock star Gene Simmons and legendary investor Jim Rogers were speaking alongside me. I had a chance to speak personally with them all and ended up learning a lot.

I even got a rare selfie with Mr. Rogers himself... 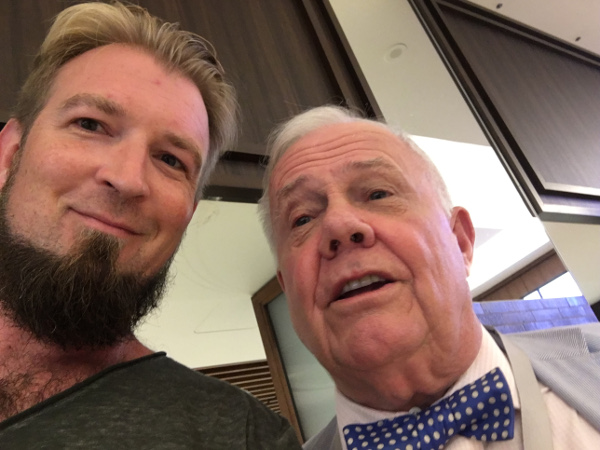 But I was there to teach... and that's what I did.

My talk was called Marijuana Investing 101: How to Buy Cannabis Stocks Without Getting Burned.

As I shuffled into the room to start the show, I couldn't help but notice that the place was packed — especially for 8:30 in the morning. I began my speech by asking how many people in the audience had ever invested in marijuana stocks before. I was rather shocked when only a quarter of the room raised their hands.

I knew I had my work cut out for me. It's not easy to boil an entire industry down into a 45-minute discussion. But I did my best...

I started by telling them that they weren't too late. In fact, my talk couldn't have come at a better time... pot stocks exploded the week before, which is a trend that will continue.

Here's a taste of what I told the crowd...

"Hello San Francisco, thanks so much for coming to The MoneyShow. My name is Jimmy Mengel and I run the cannabis investing newsletter The Marijuana Manifesto. When I started covering marijuana stocks in 2014, it was really the Wild West. Investors generally laughed at the idea. People said I was crazy for giving it the time of day.

I had a really good feeling that the tides would be turning and eventually, marijuana laws would be loosened up and once they were, early companies that had already gotten started with the legal medical marijuana market would be in a great position to capitalize on the turning tides. So, in 2014 I really started digging into the companies that were currently operating.

Eventually I read about and researched an early-stage Canadian marijuana company called Tweed that was operating in an abandoned Hershey Chocolate factory. The story itself was enough that I convinced my bosses to fly me to Smith Falls, Ontario to do some boots-on-the-ground research...

The idea was pretty simple for me at the time… I’ll get to visit a huge marijuana factory in an old chocolate factory! That’s a hell of a work assignment, to put it lightly. I figured at the very least, I’d get the experience of checking out the budding new industry and be able to report whether or not it was the real deal.

As it turns out, it was the most important trip of my career..."

"When I arrived in Smith Falls, I was met with a mix of emotions. For one, the town itself is a quaint little mill town that had clearly seen better days. There were several old factories that had been vacated. The streets were rather empty, and the restaurants and bars were scattered with a few locals.

I began talking to them about this mysterious new marijuana factory. Everyone I spoke with was thrilled…

I talked to ex-factory workers who had lost their jobs when Hershey moved to Mexico, and were encouraged that the Tweed factory would bring some local jobs back. I talked to police officers who were glad that they would eventually have to stop wasting their time locking kids up for petty marijuana charges. I spoke with store owners who were thrilled that it would bring more people back to Smith Falls to shop, eat, and drink again.

But the real epiphany came once I stepped foot into the factory itself. I was there to meet with Bruce Linton, CEO of Tweed.

After clearing security and being shown to his office, I was met with a sign that read: Mr. Wonka, CEO.

That’s cute, I thought… but maybe these guys aren’t quite as serious as I anticipated. But once Bruce introduced himself and began the tour, my mind was completely blown. There were pressure-locked security doors. There were sanitizing pools to step in before entering grow rooms. There was an entire factory — FULL OF MARIJUANA! I had never seen or smelled anything like it." 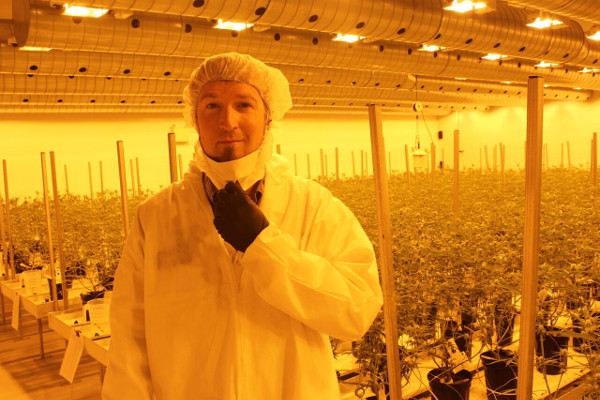 I knew this would be big business, and I was right. That company ended up becoming Canopy Growth Corp. (TSX: WEED) (NYSE: CGC). I recommended it to my readers immediately and here's what has happened since:

Yes, you saw that right. A 3,000% gain in a couple of years. I dare you to find another industry that can boast returns like that.

This is but a tiny sliver of my speech from San Francisco. If you couldn't make it to the MoneyShow, I urge you to watch the webinar I recently filmed with Nick Hodge. I go into far more detail about the industry, I give out a few free stock picks, and I reveal my favorite medical marijuana stock. It is the speech I would have given had I more time.

I have a portfolio of companies that could be the next Canopy. I urge you to watch my talk with Nick and decide whether or not you're ready to get on board.

The only catch is, you have to watch it now.