A Foul Musk in the Air

I don’t know about you, but I tend to sell my stocks when I think that they’ll be going down…

Call me crazy, but if I believe a stock is heading higher, I tend to hang onto it for a while. Now, I know that there are all sorts of reasons to sell stock and cash in your winnings. You could be putting up a down payment on a house or a car. Perhaps you have a child going to college. Maybe you’re retiring and just want to lay your nest egg on a bed of feathers for safe keeping.

But when you’re the richest man in the world selling stock in your own company based on a Twitter poll, something doesn’t smell quite right.

On Nov. 6, Musk put out a Tweet asking whether he should start selling his Tesla stock. 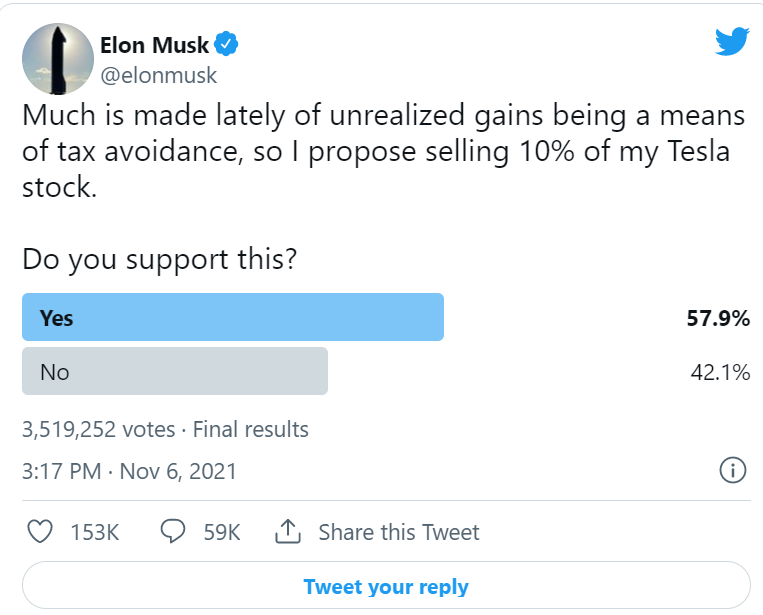 That would be warning number one: Why would the richest man in the world leave his financial decisions up to the Twitter mob? I don’t know if you use Twitter, but I wouldn’t trust that diseased hive-mind to give me a good gumbo recipe without getting a slew of apoplectic insults as a side dish...

Nevertheless, Elon reached out to his 60 million followers and — much to my surprise — they told him to sell!

And he did: Musk unloaded $6.9 billion the following week with the populist trope that he was doing the people’s bidding.

What he was really doing was selling shares for tax purposes related to an exercise of stock options that were to come due next year. It could have cost him between $10 to $15 billion in taxes. He also had taken out loans using those shares as collateral.

That’s all well and good and no investor would blame him for doing so. I don’t care who you are, that is an unfathomable amount of cash to hand over to the government without a fight. The problem is that his selling tanked the stock 15% for the rest of Tesla investors that were sitting there holding his purse while he did it.

Despite selling enough to satisfy the tax issue, he continued to unload shares. On Nov. 15 he sold another $1.9 billion worth of his own company. Why do that if you thought the shares were going to keep rising?

Musk answered that with an email to investors that “leaked” to the media. He told them that he was going to halt the common trend of accelerating deliveries leading up to fourth-quarter earnings. Typically doing so allows companies to puff their chests and promise the moon to investors, who also clamor for big earnings and delivery numbers.

He told them the following:

“Looked at over a six-month period, we won’t have any extra cars, but we would have spent a lot of extra money and burned ourselves out to accelerate deliveries in the last two weeks of each quarter,” reads the email. “This is [the] right time to start reducing the size of the wave in favor of a steadier and more efficient pace of deliveries.”

Honestly, he’s right, and it was a smart business move. But it was quite shady to position himself as a man of the people, sell off $10 billion in stock on their “advice,” and then drop news that would almost certainly have an effect on the stock price.

Personally, I’m sick and tired of all the shenanigans. Elon Musk is constantly jerking investors around. Whether it was making a sophomoric marijuana joke about taking Tesla private at $4.20 (it cost him his seat on the board and an SEC sanction), calling a volunteer explorer attempting to rescue a child soccer team from a cave in Thailand a pedophile (he was sued), or ripping on his pet crypto Dogecoin during his insufferable “Saturday Night Live” performance (the coin tanked afterwards), he needs to find a quiet place and reflect on what his actions have done to an unwitting public that seems to hang on his every word.

That was a long sentence, but merely a snapshot at how disruptive this guy has been.

Instead of trying to keep up with Elon Musk's mania, I’d rather put my money on another automotive technology that is far more interesting than overpriced, battery-operated, status-symbol vehicles.

My friend and colleague Alex Koyfman just discovered a company that could unlock an unlimited supply of cheap zero-emission fuel. I’m not talking about hydrogen, bioethanol, or nuclear fusion.

This is not about any new kind of battery either...

It could be one of the reasons that Elon Musk saw the writing on the wall and decided that Tesla's best days were behind him.

Not only can this new fuel change the auto industry, it's a universal fuel. It can be used for everything: ships, airplanes, and basically anything with an engine.

Alex has been raving about this company since it was reserved for insiders as an exclusive private placement. I've been eagerly awaiting its IPO, and thankfully it has gone public so this opportunity is now open to everyday Americans.

While Elon Musk is selling off Tesla, I wouldn't be a bit surprised if he's buying into this company.