A Federal Judge, Nine Years, and Incredible Demand Set This Trade up Today

Once upon a time, way in the way back, I wrote one of my first articles for what would become the Outsider Club.

It all hinged around one chart, one federal judge’s ruling, and a “gray market” industry that is now legit and soaring beyond what anyone could anticipate.

Here is that chart, and we’ll get right into what it means, why it mattered, and what it means for us today as investors. 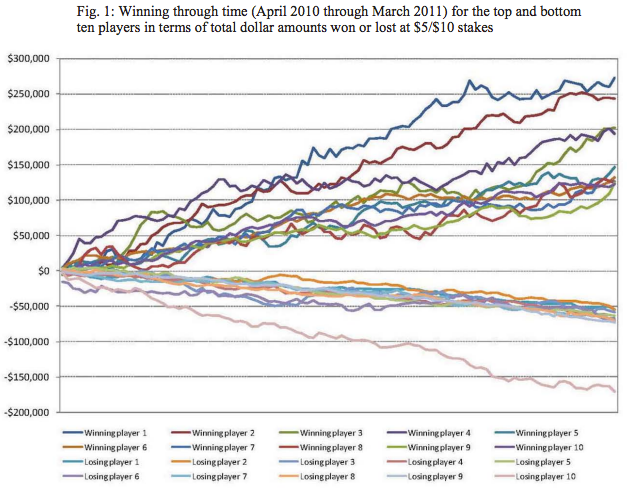 As the federal ban on virtually all forms of gambling outside of a couple places (Nevada and New Jersey stand out) was being debated about nine years ago, it all centered around what was truly a “game of chance” and card games were at the heart of the matter.

The chart above is for a massive data set on no-limit hold ’em-style poker. Similar ones were presented to Judge Jack B. Weinstein in Brooklyn, showing that, while chance may be a factor for the cards in individual hands, the mere existence of chance when bets are involved does not define the whole system.

In particular, an economist named Randal Heeb provided analysis of 415 million hands of no-limit hold ’em that were played online. Judge Weinstein overturned a good 160 years of ambiguity and precedent based on this data in 2012.

The laws on the books were fundamentally wrong as they were written. A “game of chance” wouldn’t show such consistent performance by some players. There would be “reversions to mean” — early winners could beat the odds in a handful of games but ultimately lose to the house, or if the house was taking a flat cut, there would be far more churn in total earnings over time.

Further court rulings would uphold Judge Weinstein’s decision, and here we are today.

Card games are available here in Maryland now. Have been for years. Same for many states. More importantly, the most popular — by far — kind of gambling is now available to all.

Today, it has never been easier to safely and securely bet on sports, and it shows in the number of people that are signing up to do exactly that.

A $516 billion market is now optimized to run on the phone that’s probably in your pocket right now.

Full legalization finally came in 2018, and online gambling is now legal in 22 states. Another 25 are in the process of proposing new laws.

And if all of this invokes that old image of “games of chance” and fly-by-night bookies, you need to ditch that bias.

Nothing is as prominent or growing faster than sports betting, a prime case of where gambling is not a game of chance at all.

DraftKings is now publicly traded and up 500% since early 2020. Casinos aren’t just being squeezed because of the pandemic, but because their players don’t have to travel across the country just to settle for their padded margins.

And there is so much more on the way as the market blows up. A number of companies have entered into the space in a second wave that puts the first movers to shame.

Earlier this last year, CNBC reported that half of all Americans would put a bet on the Super Bowl. Most were just a couple bucks, but it totaled $4.3 billion.

This isn’t a business of vice and bookies and strong-arming people to pay up. It’s a business that is nearly identical to banking and credit card companies and mortgages.

It’s a business of numbers and mitigated risk across a wide swath with guarantees in place. And the companies with the best platforms will take the lion’s share of the rapid expansion in the new market.

It is mind-boggling to me how far this has come since laws and regulations caught up to reality. Yet in the age of apps like Robinhood completely blowing out stock trading, it also feels like a direct extension of both sentiment and tech, plus untapped growth.

The Outsider Club’s Jimmy Mengel just dropped a report for his readers, and if you, like so many others — perhaps as many as half of Americans — have come around to the convenience and potential in recent years, you should check it out.