A Dire Warning From the Bear the Pros Secretly Love

Albert Edwards isn’t exactly a household name. Nor are his ideas and writings particularly popular. At least in the media and the public realm of ideas.

He is the kind of analyst that analysts don’t want to admit to reading, but they do. And they love his work. This has become apparent every year, for the past 14 years.

Mr. Edwards is a Société Générale global strategist and just came in first with his team for the 2017 Extel Survey of analysts in the Global Strategy category.

With over 15,000 professionals from nearly 5,000 firms voting in the European investment industry, that represents some serious clout.

So why are all these pros willing to give him the top spot in a private poll while ignoring him in public?

That’s simple, he’s been telling them something that they can’t market to their clients, and would not inspire a wave of buying and subsequent fees.

With the announcement of his 14th consecutive win, he decided to roll out his old Ice Age Theory charts again.

If you aren’t familiar with them, you should be. It has been some of the most compelling behind-the-scenes thinking in the world over the last couple decades. Let’s take a look.

Edwards first introduced his theory back in 1996, urging an underweight position in equities and large long positions in bonds.

The heart of the theory is that deflationary pressures will trigger a stock-market collapse and a bond-market boom.

In his own words:

“The macro underpinning for our Ice Age thesis is the West's slow replication of Japan's 1990s descent into outright deflation. Each cyclical recovery sees lower highs in both inflation and nominal GDP growth rates and the inevitable recession, when it comes, wreaks increasing levels of havoc in financial markets...

“The big Ice Age call was that the tight positive correlation between equity yields and bond yields that market participants had enjoyed since 1982, driven by ever-lower inflation, would break down. The Ice Age thesis, drawing on our observations of Japan, predicted that while interest rates and bond yields would continue to fall, equity yields would decouple and begin to rise on a secular basis.”

This is a pretty dense couple of paragraphs, with a lot to unpack. Thankfully, pictures are worth a thousand words.

What He Got Right

The chart that goes with Edwards' theory shows the phases in U.S. equity and bond performance. Keep in mind these are the real yields of equities and bonds, not price charts:

The general theory holds up quite well so far. As inflation and bond yields fell, they did decouple and equity yields blew through the roof, compared to bonds, both before and after the Great Recession.

“One important implication of the Ice Age thesis was that widely used metrics from the 1980s and 90s, such as the bond/equity earnings yield ratio, would break down. Hence you should no longer buy equities when this ratio fell to 0.8 as they would be undergoing a secular de-rating.”

Yet Edwards was right about the U.S. equity market mirroring what happened in Japan 10 years prior as well: 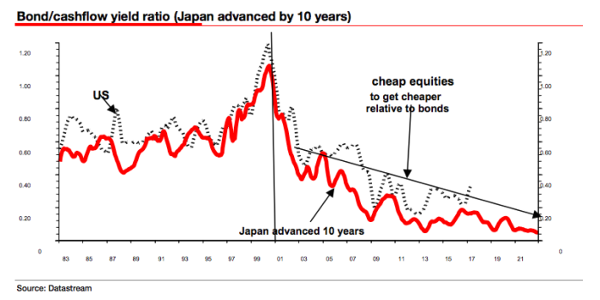 So join Outsider Club today for FREE. You'll learn how to take control of your finances, manage your own investments, and beat "the system" on your own terms. Become a member today, and get our latest free report: "James Dines: A Prediction Too Terrifying to Believe, Too True to Ignore."

Where Things Got Weird

Unfortunately for Edwards, the theory couldn’t keep holding up. The West mirrored Japan from a decade earlier quite well. Yet what was a strong indicator for a buying opportunity broke down in 2007, as seen in the U.S. bond/ equity earnings yield ratio chart above.

“Has the Ice Age thesis broken down? To be sure we saw strong cyclical rallies in the Japanese Nikkei within Japan’s own equity Ice Age secular bear market, but nothing as explosive as this…

“The counter-argument to the Ice Age thesis is not just the unusual longevity of the current equity bull market. The key is that equity yields have re-coupled with declining bond yields (see chart below). If this is, as we strongly believe, an aberration and the equity yield reconnects with the red dotted arrow, then investors should be petrified of the next equity bear market.”

With bond yields so low, this has been a huge aberration in an otherwise long-standing trend. The question remains, what changed to cause the theory to break down?

Personally, I can’t help but focus on the one factor that couldn't have possibly been included in Edwards' theory — the unprecedented market interventions we’ve seen from the Fed and ECB.

Unnatural demand for bonds from governments essentially buying their own debt and corporate debt have driven down yields, all while pushing investors to bid up equities, thus driving up yields, though it is pushing stock valuations through the roof.

And the question remains, what happens to the market when central banks unwind this external pressure? How catastrophic will the next equity bear market be as a result?

It is the question that has been hanging over the entire market for so long that many investors have forgotten it is there.

But there it is, and it is one with a looming answer with the Fed trying to (finally) move interest rates up and leave the bond buying business behind it.

With how well Edwards has framed the question at the heart of the market today, it's no surprise that the pros have put him on top for the 14th straight year. Nor is it a surprise that they don’t talk about how much they value his work in private, without mentioning it to their fee-paying clients.