Unless you’ve been living beyond the hinterlands, you’ve been blitzed by 5G ads by now, I’m sure.

The biggest beneficiaries of 5G tech so far? The marketing staff of phone makers and carriers.

Here’s the thing though. The numbers are in, and 5G — for lack of a better term — kinda sucks.

Here’s the thing about THAT though — it’s good for us.

The marketing blitz for 5G from the big names in the business has been intense for over a year now.

Get your 5G phone now. Get on the “nation’s (first/ best/ largest) 5G network”. Those networks aren’t living up to the hype. They often can’t even match the existing 4G LTE systems.

5G systems are practically worthless for a vast majority of people who are in places where 5G is technically in place.

It’s a lie of omission. Like so many tests done under ideal conditions, they simply don’t apply to the real world. They are carefully staged to make sure a single device is the only one on a single connection that is maxed out in all possible ways.

5G speed potential suggests a profound change to how we use data. 5G in the real world doesn’t have the infrastructure to make it possible. It isn’t even close.

That, right there, introduces the silver lining — not for the carriers, not for the customers who bought 5G devices — but for us as investors. The peddlers will have to "backfill" so to speak. They'll have to make good on the sales pitch.

Don’t take it from me though, take it from industry insiders and analysts who are dealing with real-world data.

As the Washington Post noted in an article a while back while testing real-world 5G speeds: “RootMetrics, a network-analysis firm owned by IHS Markit, said that in the first half of the year, median AT&T 5G speeds were 46 Mbps, only slightly faster than the 4G LTE speed of 43 Mbps. At T-Mobile, speeds increased more as a percentage, but its median 5G speed of 25 Mbps still can’t even compete with its rivals’ 4G LTE speeds.”

Emphasis added and not lost on us.

Here’s another. Mark McDiarmid, the Senior Vice President for Radio Network Engineering and Development at T-Mobile, said, “We’re not claiming that this is where the story of 5G ends. It’s very much a beginning.”

It keeps coming. Verizon has claimed its 5G network is 25% faster than today’s 4G, but real-world tests show that only 1% of Verizon customers with 5G devices can access those download speeds, and even then it depends on the bandwidth of the hardware Verizon has installed or approved.

This is where 5G networks are today. They are all heavily marketed potential with no follow-through. Smoke and mirrors, at least for now.

The carriers want the money to come in first to fund the capital-intensive process of backfilling the capacity of their networks and to make good on their promises.

A picture is worth a thousand words. Here you go: 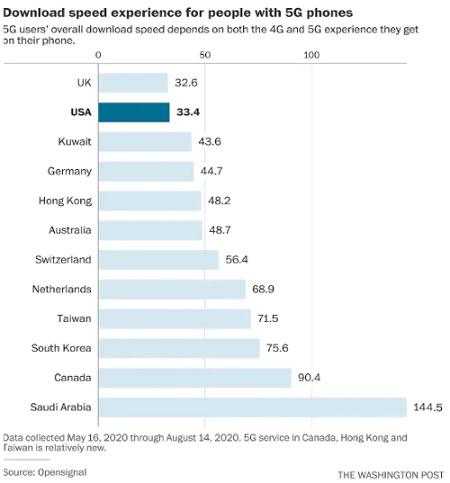 The 5G “revolution” is profound but it is anchored in the real world. The science is solid, the tech is there. Now it is about basic consumer engineering and deployment.

The network we’re being sold is going to get built, but we can’t — as the numbers show — access it yet.

It is being built though. Hundreds of billions of dollars will be spent for decades to come. The best proof that the 5G “revolution” will create massive profits going forward is that 5G infrastructure is underperforming by such a large margin right now.

From the top down to the bottom — carriers, telecoms, and tower owners all the way through bargain bin routers, signal repeaters, and subsidized phone contracts — the flood of money into 5G infrastructure has only just begun.

Let’s make sure whoever needs to make that happen pays a hefty premium to us through the companies we own.