The Federal Reserve just raised interest rates for the first time since 2018.

And popular belief among most investors holds that interest rate hikes are generally bearish for gold and precious metals.

But that’s not exactly the case.

In fact, rising interest rates might even be positive for precious metals.

The truth is, there is really no good connection we can make between interest rates and precious metals prices.

But take a look at what happened to gold following the Fed's December 2015 rate hike: 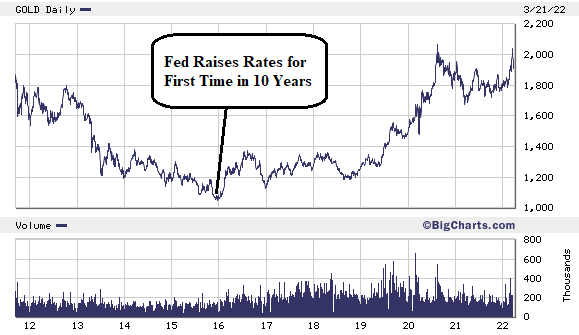 The Fed's December 2015 rate hike and the bottom of the gold market actually coincide.

And this wasn't the only time this happened.

After the Fed’s very next rate hike a year later in December 2016, gold prices increased within a month: 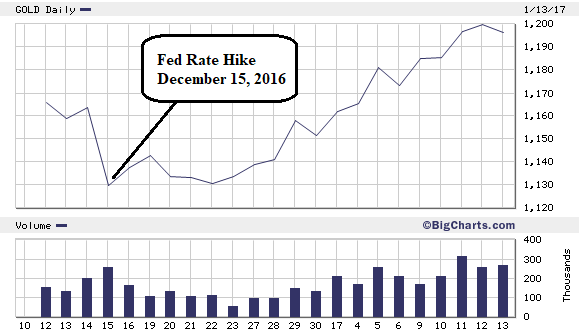 And then after the Fed’s next rate hike in March 2017, gold prices increased again: 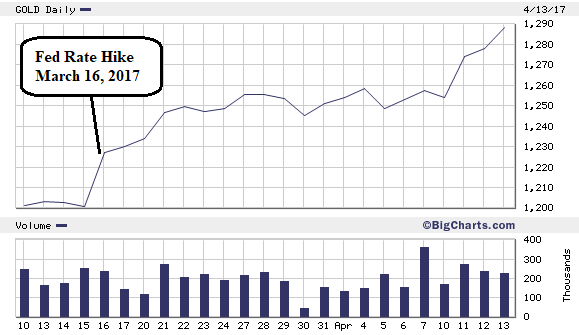 And again and again, it happened.

In fact, between December 2015 and December 2018, the Federal Reserve raised interest rates by 0.25 points nine times. Gold prices increased within a month after eight of those nine interest rate hikes.

So are interest rate hikes positive or negative for precious metals?

The truth of the matter is, we just don't know.

And there’s a good reason we don’t know.

These things don't exist in a vacuum.

There are a million different factors moving precious metals prices to varying effect in all directions. Without some kind of AI supercomputer, we could never account for all those factors to definitively say interest rates have an effect on precious metal prices one way or another.

The best we can say is, rising interest rates may not be negative for precious metals.

However, if recent history is any indication of what we can expect in the coming weeks, it's not crazy to speculate we’ll see precious metals prices trend upward — especially considering continued inflation and U.S. dollar instability.

Here's the cash and futures prices for the rest of the year from the CME:

Silver is trading for under $25 on the CME.

But if you went to buy an ounce of silver from any bullion dealer, you’d have to pay closer to $40 or more.

If you just bought one of these using your credit card, you’d pay $42.71 for an ounce of silver — 40% higher than CME prices.

In fact, take a look at Provident’s pricing structure again. Below the table you’ll see the company’s “buy back price.” That’s what Provident will pay you for a random year American Silver Eagle: $31.11 per unit.

Physical bullion offers investors a lot of safety — not only as an economic hedge, but also as practical wealth protection. Bank and crypto accounts are often broken into. No one has ever digitally hacked a bar of gold.

But physical bullion isn't as liquid as digitally traded assets like stocks. To sell a significant amount of bullion and get payment typically takes a few days.

Mining stocks are the next best option after bullion to leverage rising silver prices.

There are hundreds of public companies involved in silver mining, exploration, development, royalties, streaming deals, etc. And they’re all involved in different ways.

The safest way to invest in silver mining is through one of the major producers. Here are three major silver producers producing tens of millions of ounces per year:

Fresnillo is a major precious metals mining company incorporated in the United Kingdom and conducting operations in Mexico.

The company is the world’s largest silver producer. Every year it mines and sells more than 50 million ounces of silver. Fresnillo is also the second-largest producer of gold in Mexico, with an output of about 900,000 ounces annually (pre-pandemic).

Fresnillo’s main listing is on the London Stock Exchange where it’s part of the FTSE 100 Index. That means it might be hard for some American investors to buy. Fresnillo does have an American Pink Sheet listing. But the volume on that listing is laughably small. It’s nearly illiquid. The next company might be a better bet for most Americans.

Glencore is one of the largest mining companies and suppliers of silver in the world, producing more than 30 million ounces of the white metal per year. The company’s operations comprise approximately 150 mineral assets in over 35 countries.

But Glencore mines everything. The company is a major producer and marketer of more than 60 commodities — everything from copper to coal. So Glencore is far from a pure silver play.

Newmont is a U.S.-based company that is the largest producer of gold in the world. Last year Newmont produced almost six million ounces of gold from its mines in North America, South America, Australia, and Africa.

But the company is also the world’s fourth-largest producer of silver, mining 29 million ounces a year from its Peñasquito Mine alone. In addition to Peñasquito, Newmont has several other silver assets, including a number of streaming and royalty deals.

Newmont Mining is the only gold production company listed in the S&P 500 Index and is an industry leader in every aspect of the mineral mining universe. Of the three silver producers we’ve just talked about, Newmont is probably the best option for most American investors.

P.S. In other news, did you know that the U.S. government spends more than $80 billion on a set of clandestine military programs collectively called the “Black Budget”? All the important details about these programs are shared with just a small group of insiders — giving that small group a chance at becoming incredibly wealthy.

My colleague Jason Simpkins is about to change all of that. He’s preparing to pull back the curtain on the “Black Budget” and show investors like yourself the type of information that’s crucial to turning small investments into astonishing wealth. All you have to do is secure your spot for the advanced screening of Jason’s new investigative series, Secret Stock Files, by joining here.