In last night's State of the Union address, Joe Biden spoke about U.S. inflation telling the nation, “Too many families are struggling to keep up with their bills. I get it. That's why my top priority is getting prices under control.”

But there's little Biden can actually do.

The consumer price index for January rose to 7.5%. That was its highest reading since February 1982.

Meanwhile, consumer spending was up 1.5% in January, despite sharp increases in retail prices across the board.

And with more than $6 trillion freshly printed U.S. dollars just now starting to work their way into the market, there's no one who doesn't see inflation continuing higher.

40% of All U.S. Dollars That Exist Today
Were Created in the Past 24 Months 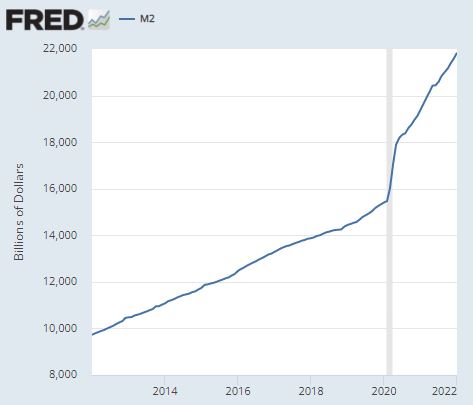 Despite the recent debate of gold's role as a hedge against inflation, investors are once again looking to yellow as a safe haven.

At the end of February, gold prices rose to an intra-day high of almost $1,980 an ounce, the yellow metal's highest level in a year and half.

And now after a brief profit-taking dip, the yellow metal is once again eyeing the $2,000 level.

There are multiple different ways for investors to own gold, each with their own advantages and disadvantages.

The most traditional and direct way to invest in gold is to buy physical gold bullion: coins and bars.

Physical gold bullion coins and bars offer investors a lot of safety. And not only as an economic hedge, but also practical wealth protection. Bank and crypto accounts are often broken into. Never in history has a physical gold bar been digitally hacked.

But physical gold bullion isn't as liquid as stocks, crypto, or other digitally-traded assets. To sell a significant amount of gold and get payment typically takes a few days.

Gold mining stocks also offer investors a good way to get exposure to rising gold prices. But with mining comes risk. Many mining companies are only one or two disasters away from seeing their stock plummet.

But there is a third option available to investors that offers a safer way to invest in gold without owning the physical metal in any way or taking big risks with mining.

It's what are known as gold royalty and streaming companies.

A gold royalty and streaming company is one that generates its revenue from royalty payments from gold mines and/or streaming deals with other gold miners.

A gold royalty payment is a percentage of a mine's production or revenue that companies receive in exchange for an upfront payment.

A gold streaming deal describes an agreement where a company provides cash upfront for the right to buy gold at reduced prices in the future.

These large gold royalty and streaming companies are perhaps the safest gold stocks to hedge against inflation.

Franco-Nevada (NYSE: FNV) is the largest gold-focused royalty and streaming company with more than 400 assets across what it claims is the world's most diversified global portfolio.

Like most other royalty and streaming companies, Franco-Nevada is not a pure gold company. Instead it has a large portfolio of diverse projects from which the company generates revenue.

Approximately 70% of the company's revenue comes from gold mining. The rest of its revenues are derived from silver (11%), platinum group metals (8%), energy (9%), and other minor assets (2%).

Franco-Nevada is the largest gold-focused royalty and streaming company with a market cap of over $29 billion. And it's one of the most well-known gold stocks in the entire precious metals sector. That makes it a buy target for investors of all levels from Robinhood users to global investment banks. In a market hungry for gold, everyone is going to want a piece of FNV.

Wheaton Precious Metals (NYSE: WPM) started its corporate life as Silver Wheaton in 2004 to establish itself as the world's primary silver-streaming company. But in 2017 the company changed its name and began focusing more on gold streaming.

Approximately 60% of the company's revenue is derived from gold-streaming deals. Another 36% comes from silver streams. And the remaining 4% comes from PGM and cobalt sales.

Most of Wheaton Precious Metals' assets are scattered throughout North and South America. But the company also has a handful of streams from operations in Europe.

WPM is slightly less focused on gold, but more focused on precious metals overall than FNV. It's also another very well-known company within the gold sector with a market cap of more than $20 billion. So if you don't want any energy exposure in your gold-streaming play, WPM might be for you.

Royal Gold (NASDAQ: RGLD) is another very well-known gold-focused stream and royalty company with interests in 190 properties on five continents. Those include interests on 44 producing mines and 17 development-stage projects.

About 73% of the company's revenue comes from gold-streaming deals and royalties. Another 10% comes from silver. And another 14% from copper.

With a market cap of just over $8 billion, Royal Gold is the smallest of the three. But it's also the most directly exposed to gold.

But these three are perhaps the safest gold stocks to hedge inflation in 2022.

If you want a little more risk (and a chance for a much bigger return), check out the story behind what every gold analyst is calling one of the biggest gold finds of the 21st century.