The future is here, and it keeps getting weirder...

“Dad, someone just FLEW a car into the yard!”

Those were the words my son used to wake me up Monday morning. I quickly tossed on a t-shirt and ran outside to make sure nobody was injured. What happened next was something out of a bad action movie.

Of course, with my son being eight years old, I didn't take the word “fly” as literally as I should have. I assumed that someone had jumped the curb and possibly ran into one of our cars. Maybe they hit our mailbox. But after rushing outside, I had to look around for a while until I finally spotted it: a white SUV hidden under some trees, some thirty or so feet into my woods.

"Holy shit", I said to myself... this looks like it dropped from the sky. The car most certainly “flew” quite a ways in order to land where it did... 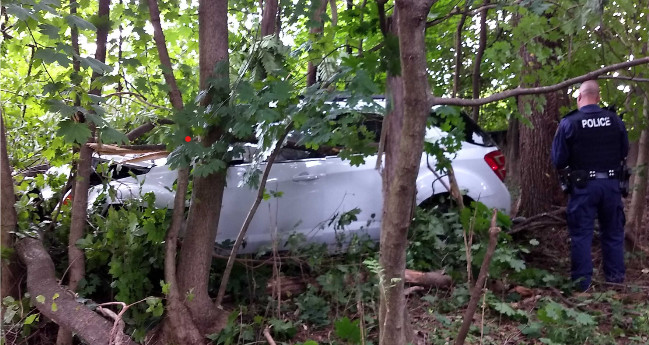 It made utterly no sense, and I ran towards the destroyed vehicle expecting to find at least one dead body.

But, shockingly, that wasn't the case. Two men slithered out of the driver-side door and fell face-first into the brush. I couldn't believe it.

But when they began walking towards me, I started to get a strong feeling that something was amiss...

"Oh my god, are you guys okay?" I asked in absolute amazement.

The older gentleman — around 50, I'd say — said that yes, they were fine. I knew from suffering a serious car crash of my own that he was most likely in shock and — judging by the shape of the car — had to be hurt in some way or another. The younger man did seem to be injured, as he walked with a hobbled lurch and wasn't keeping pace with the older man, who was now quickly making his way to the road.

That's when I looked down at his leg and saw the ankle bracelet.

"Hey, where's the nearest convenience store?" the older man asked me politely, as if they didn't just airmail their car into the woods and cheat death mere moments ago.

At this point I really just wanted them to get as far away from my house as possible — my wife was inside calling the police and my children were huddled at the window, wondering what in god’s name was taking place.

I motioned my trembling right hand towards the road, and they were on their way.

It was after the men had disappeared around the bend that a woman arrived in my driveway and began recounting the scene she witnessed in vivid detail. She had been traveling at a safe distance behind them on her way to work, when she said they picked up “a jolt” of incredible speed, ran like hellfire right through a traffic circle, and up the embankment that leads to my home.

“They were twenty feet in the air!” she shouted. “If I saw it in an action movie, I would laugh at how impossible it was.”

She referenced Evel Knievel — a name I hadn’t heard in quite some time.

While she was waiting around to give the police a witness report, she leaned over and said, “I’m a public defender and DUI attorney, and I have to say — I’ve never seen anything like this in my life.”

Apparently, neither had the police or fire department, for when they arrived, confusion reigned...

The fire department was the first on the scene. A portly gentleman approached me and asked, “Sir, did you happen to get the plate numbers on the car?”

“Um, they’re still on it,” I responded, confused.

“Yes, but did you write them down?”

There was clearly a disconnect. I gestured to the woods and led him to the vehicle. He was aghast.

“How did they get the car all the way into the woods? I thought they crashed and sped away!”

The fire deputy then took a close look at the car and shouted for his fellow firefighters that “You guys gotta see this! The car is in the woods!”

While we waited for the police, the fire crew took turns taking pictures of each other standing next to the wreckage and sending them to their friends and family. Clearly, this was not a normal occurrence — even for firemen who have seen far more danger and destruction in a year than I will in my entire life.

One of them put on gloves and leaned into the driver's side to turn the car off, as it was still running and smoking up the whole scene.

At that point, the police arrived.

“Are you Mr. Mengel?” the officer asked. I nodded that, yes, indeed I was. The police helicopter circling above and the masks we were both wearing made non-verbal contact rather necessary.

As he was inspecting the scene, his radio blared: “We got em.”

It turns out that the men were escaped convicts. They had stolen the car from a family up the road, and after crashing it into my yard, the men fled into a nearby neighborhood, where they proceeded to steal two bikes from a shed in an attempt to escape for good.

From what I could gather from the officer and his radio, they had hightailed it, split up, and led the cops on an hour-long foot-chase into the woods. Both were arrested on a litany of charges from grand theft auto to larceny, burglary, and — obviously — leaving the scene of an accident.

When one of the arresting officers arrived at the house, still out of breath, he took a look at the car and marveled at how fast the suspects could run. 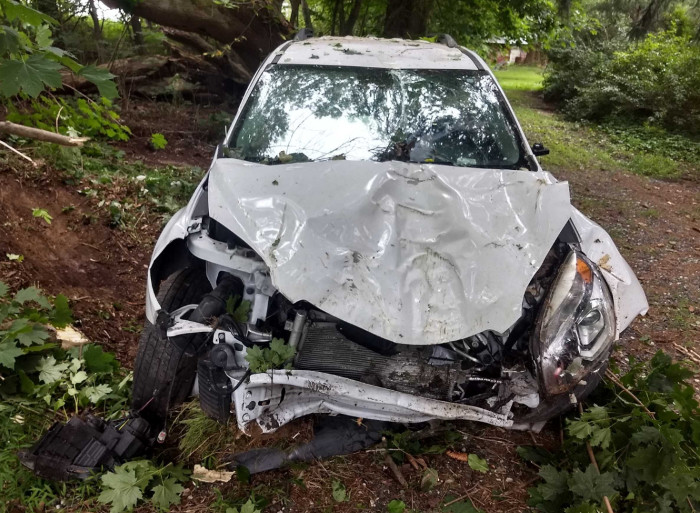 "Those guys were quick!" he panted. He also mentioned that they were high as a kite, and adrenaline and amphetamines go a long way. I'd say this here story backs that statement up...

Eventually, a tow truck arrived to pull the car out of the woods. I’m sad to say that we did lose a couple of trees in the process. But I’m still flabbergasted at the fact that nobody was injured. It all could have been a whole lot worse.

So, why am I telling you all this? I'm not sure. Perhaps because it's just emblematic of the year so far. I am no longer surprised by anything that happens. Pandemics, politics, profits, police chases?

This was simply a typical Monday morning in this cursed year of our Lord, 2020.

Stay safe out there.