According to the latest data from the Bureau of Labor and Statistics, the price of food in America has increased 5.3% over the past 12 months.

In some cities, like Miami and Atlanta, food prices have only increased 1% to 2%. In others, however, the price of food has increased more than 7%.

Here are the 15 cities in America where food prices have increased most over the past year. 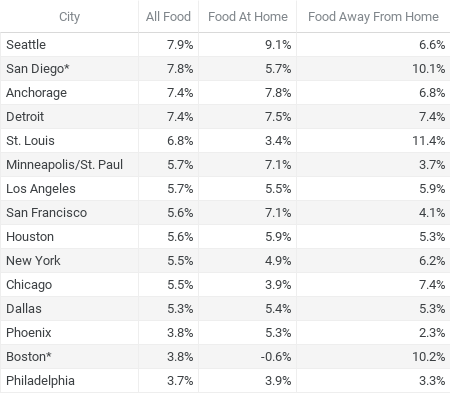 Seattle leads the country in food inflation. Over the past 12 months food prices have increased 7.9% in the Emerald City. The BLS says prices for food at home in Seattle increased 9.1%, led by a 22.5% jump in prices for meats, poultry, fish, and eggs.

The bad news is the price of food is all but GUARANTEED to continue moving drastically higher next year.

Food prices have been driven higher over the past year for many different reasons. The three major factors driving food prices higher are the factors you hear everyone tell you:

Experts agree there are no short-term answers to any of these problems. And they will likely continue to add to food prices in 2022.

But there is a fourth major factor that promises to drive food prices even higher that very few people are considering.

That factor is fertilizer.

Oh Sh*t, We Have a Fertilizer Problem

The price of fertilizers has absolutely soared in 2021.

There are eight major fertilizers used around the world. FIVE of those eight have more than doubled in price during the first 11 months of this year. 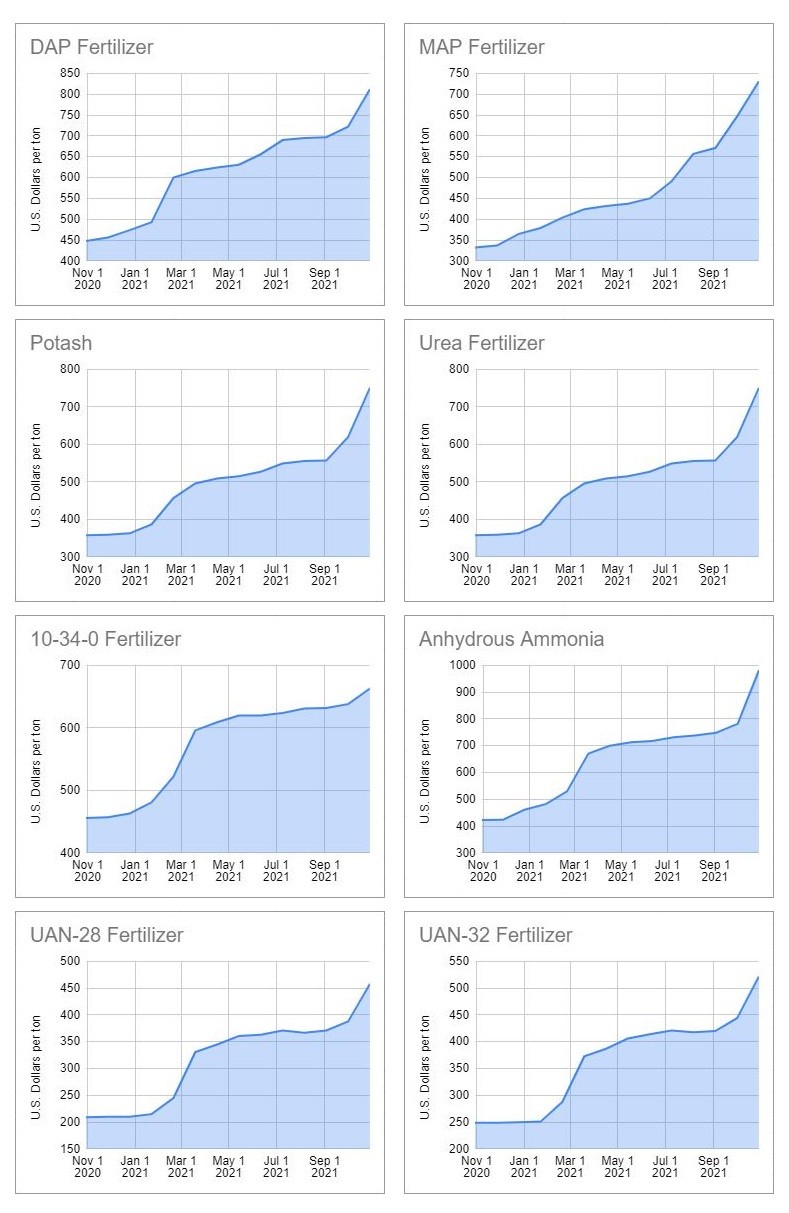 But here's what is really important to understand about fertilizer prices and how they relate to food...

The current price of fertilizer is NOT a factor in current food prices.

The food you buy in the grocery store today was grown and raised last season — and with last season's fertilizer prices, which were significantly lower than they are today.

To put it shortly, fertilizer prices are a lagging factor to food prices.

The single-most expensive part of growing a field crop like corn or wheat is the fertilizer costs. According to the USDA's Economic Research Service, fertilizer will account for between 14% and 36% of a farmer's total cost of operation for eight food staples in 2021.

On the higher end, the fertilizer costs for corn, wheat, and oats account for about a third of a farmer's total cost of operation. 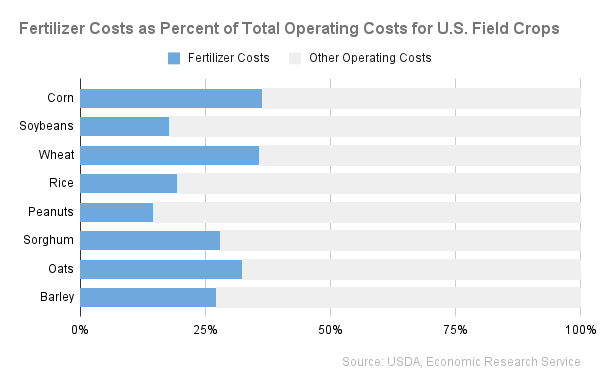 And any significant increase to a farmer's cost will have to be passed down to the consumer — you.

With the price of food soaring now, everyone wants to give you tips to save. But aside from doing without, there is very little you can do to significantly lower food costs.

What you can do about rising fertilizer prices, however, is PROFIT from them.

How to Profit From Rising Fertilizer Prices

Modern synthetic fertilizers are composed of synthesized or processed chemicals that deliver different nutrients to soil.

Fertilizers also include various micronutrients. But nitrogen, phosphorus, and potassium (otherwise just known as NPK) have been identified as macronutrients absolutely necessary for plants. Each of these macronutrients plays a different role in plant growth. 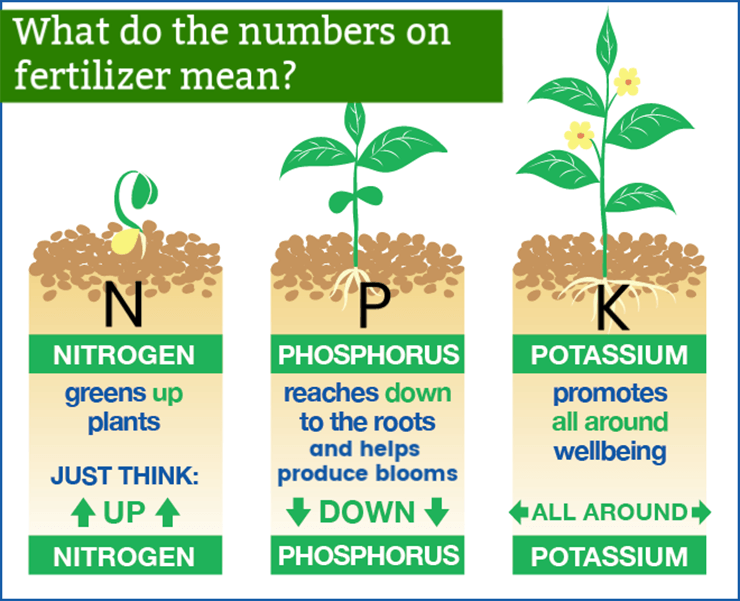 Of the three, nitrogen is by far the easiest to source.

Nitrogen is all around us. The air in Earth's atmosphere is made up of about 78% nitrogen.

And thanks to the Haber-Bosch process we can produce ammonia from the air, which then gives us nitrogen for synthetic fertilizers. So we can basically just pull nitrogen from the air.

And as long as we have air and energy, we can produce nitrogen.

Potassium is the second easiest to source. That's partly because potassium is also one of the most abundant elements on Earth, accounting for more than 2% of the planet's crust.

The potassium in synthetic fertilizers is derived from potash, a mined and manufactured salt. And world potash resources are vast. Estimates suggest the world has enough potash reserves to meet demand for hundreds to thousands of years. Moreover, potash deposits in concentrations high enough to mine can be found all over the world. So potassium isn’t a huge problem.

But then there’s phosphorus...

Of the three macronutrients required to produce synthetic fertilizers, phosphorus is the most difficult to source. That’s because phosphorus is much less abundant than potassium or nitrogen.

And it's become even more difficult to source as nations around the world have begun cutting supplies.

In September 2021, China, the world’s largest producer, announced a ban on phosphate exports through July 2022.

Then beginning on Dec. 1, Russia started cutting exports of phosphates and fertilizer products. 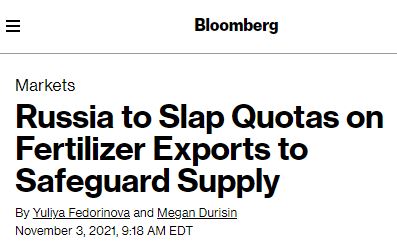 Meanwhile major North America phosphate producers like Mosaic have had serious shutdown issues due to hurricanes and environmental concerns. 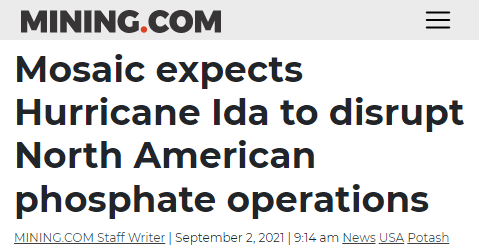 The best way to profit from rising fertilizer costs is to get exposure to phosphate assets.

Unfortunately, much of the world's phosphate resources are off-limits to investors, being owned as state-run operations.

However there is one tiny public company in North America with a phosphate project that is so exciting and has so much upside potential, I think it's going to be one of my biggest winning stock picks in my 20-year career.

I've just finished putting the final touches on a fully detailed, 7,000-word report that tells investors all about this company and its incredible project. To learn more about this incredible opportunity, click here.