"Power" for One Million, Alex

What Jeopardy can teach you about investing...

"Thou, Trivia, goddess, aid my song: Through spacious streets conduct thy bard along."

Yes, I’m highbrow enough to quote Oxford-trained essayists. I'm also lowbrow enough to have spent many years watching stupid television shows. That’s also why I’ll be the first to admit that I love Jeopardy. It's the best of both worlds...

I lived and breathed Jeopardy as a child. I watched religiously. I cherished it even more after watching pedestrian fodder like Wheel of Fortune and Family Feud. Again, there’s no judgment here as I also loved Double Dare enough to participate in person and — almost — get covered in slime.

That is a long way to say that I enjoy television game shows.

I like watching people under pressure in any situation, but Jeopardy was different. Each and every clue I learned more and more information about things I never even knew I wanted to know!

The invading army that sacked Rome in 410.

Who are the Visigoths?

This philosopher turned against Plato to start his own brand of philosophy.

This Major League Baseball manager of the 1950s & 1960s received his nickname because he was born in Kansas City.

Who is "Casey" Stengel?

All good things to know — now you know them too. But I would have never known these facts when I was 8 years old were it not for Jeopardy. But I’ve known them ever since Alex Trebek told me about them 30 years ago.

Now, trivia is by nature trivial. That’s why it’s defined as such: “Information and data that are considered to be of little value.”

I totally disagree. I think every piece of information you can get your mind around is very valuable — especially those that you can lord over your friends, family, and colleagues.

Today, you too can learn some “trivia” that won’t only make you seem smarter, but also reap huge financial gains from a man who should be on everyone's trivia radar…

You may have rightly concluded that I’ve been watching the Jeopardy Tournament of Champions this week. It’s been an absolute pleasure to watch all-time masters like Ken Jennings, Brad Rutter, and James Holzhauer duke it out for a cool million bucks.

My 8-year-old son and I watched together and rejoiced as Ken Jennings — the purest one — took the final round. It almost brought a tear to my eye watching my son replicate my childhood enthusiasm. It was like he was watching a Super Bowl game.

But the most important part of the tournament for me — and for investors — was when this popped up on the screen:

It was an easy answer — knowledge — yet my son was still impressed that I nailed it. (I spared him the fact that Bacon didn’t actually come up with the phrase and its Latin origin is "scientia potentia est." I didn’t want to look like too much of a pretentious asshole.)

In any case, if you don’t plan on contesting Ken Jennings as the next Jeopardy champion, that clue and answer could be the one piece of knowledge you need to hand you a fortune...

Sir Francis Bacon is well known for many things.

His most important contribution to the modern age of science is the “scientific method”, which focuses more on gathering data from experiments instead of relying on old-fashioned logic-based arguments.

But for investing purposes, Bacon’s descendant of the same name developed the hydrogen-oxygen fuel cell, which could be the single-most important discovery of our lives.

Like I told you last week, Sir William Grove first came up with the idea of a fuel cell in 1893 (talk about Jeopardy fodder). However, Francis Thomas Bacon took it a step further almost 100 years later. He came up with what is now known as the Alkaline Fuel Cell — or the “Bacon” fuel cell — which got its power from hydrogen and oxygen.

This reaction releases electrons and creates energy. The only things that remain are heat and water. It was one of the most brilliant discoveries ever.

NASA has used this technology in the Space Shuttle program and the Apollo missions since the 1960s.

President Richard Nixon told him "Without you Tom, we wouldn't have gotten to the moon.”

So he’s kind of a big deal.

In an issue of New Scientist in 1972, Bacon himself predicted that by 2050, hydrogen fuel cells will fuel a third of the world’s vehicles. I think he — unlike many scientific prognosticators — was way too conservative.

I believe this transition is already happening, and have seen the results for myself.

Here is the proof: I actually drank the water from the tailpipe of this car… 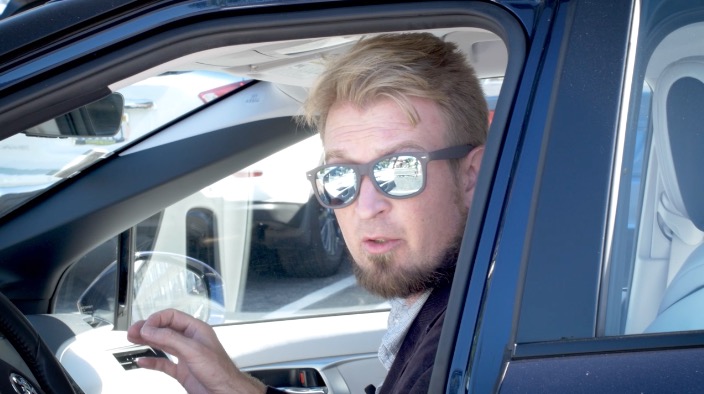 If Alex Trebek had said “In 30 years you’ll be drinking water from this”, I would never have guessed “What is a Car.”

But here we are. That time has already arrived, long after Francis Thomas Bacon introduced the technology and much sooner than he believed it would be widespread.

Unlike Mr. Trebek, I’ve made it easy. I’ve provided the clue.

Has Elon Musk Lost His Mind?
There is no denying Elon Musk's genius. Not only is he smart but he is beyond ambitious. Lately though, he seems to be going off the deep end. Outsider Club editor Jimmy Mengel discusses a rising opportunity for investors...
A Very Quiet (and Profitable) Revolution
What if there was a product that saw a 40% jump in demand last year? A product that hit a record-high peak in proliferation? A product that was useful, inexpensive, and environmentally friendly?
Investing in Marijuana Without Getting Burned
The marijuana industry has rewarded scores of investors with life-changing gains.