"Policymakers Have No End Game, Markets Do"

On Sunday, the Wall Street elite filed into the Ira Sohn Conference — the kind of self-congratulatory charity event that is all too common in a world that is burning around them.

This is one of those events where the titans of investing and finance get to pitch ideas about what is happening all around them. They normally feature the kinds of cheerleading for a sector, technology, or 'why this bull market isn't over' sentiment we're regularly inundated with.

However, word has already spread about one of the speakers, Stanley Druckenmiller, who decided to throw a wet blanket on the unspoken feel-good-only rule.

The thing is, he is absolutely right.

Plus, there are signs that some small investors may be playing this right, in spite of the unending blitz of misleading information that pours from the ivory towers of finance to make sure there is always a greater fool out there to pay a premium for any equity they own.

As Druckenmiller almost immediately pointed out in his presentation, the policymakers today are a far cry from those that set up the great bull run through the 90s.

Paul Volcker may have created pain in the short term during the 80s, but Fed and government actions were strong catalysts for change:

"...the 15% hurdle [5 year Treasuries] rate forced corporations to invest their capital wisely and engage in their own structural reform. If this led to one of the greatest investment environments ever, how can the mirror of it, which is where we are today, also be a great investment environment? Not a week goes by without someone extolling the virtues of the equity market because “there is no alternative” with rates at zero. The view has become so widely held it has its own acronym, “TINA.”"

The fact that the Fed has worked hard to make sure as much money as possible flows into equities hardly needs to be explained to anyone with even a cursory idea of what has been happening over most of the last decade.

What isn't as easily grasped is how little capacity there is to push it further. Real wages have been flat since the 80s and beyond. Meanwhile, credit (AKA leverage) has more than doubled: 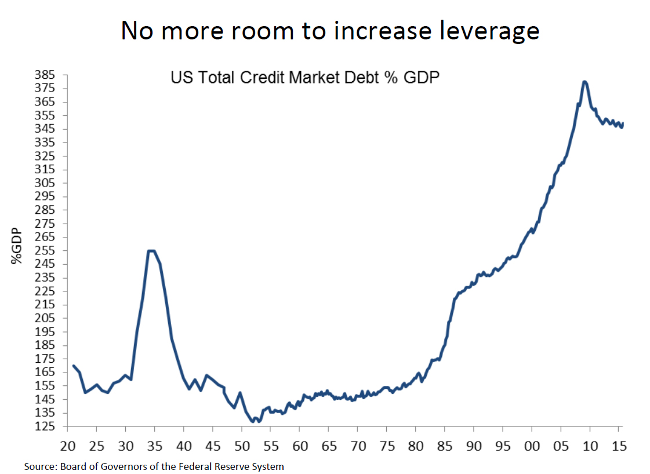 Yet the Fed is continuing what Druckenmiller calls, “By most objective measures, we are deep into the longest period ever of excessively easy monetary policies.”

Adhering to the Taylor Rules — New Keynesian rules to determine what the Fed should do with interest rates based on inflation, employment, and output — would put interest rates around 3% today. Instead, we're still around .5%.

By keeping interest rates artificially low compared to what the data suggests, it is, in effect, borrowing from the future: 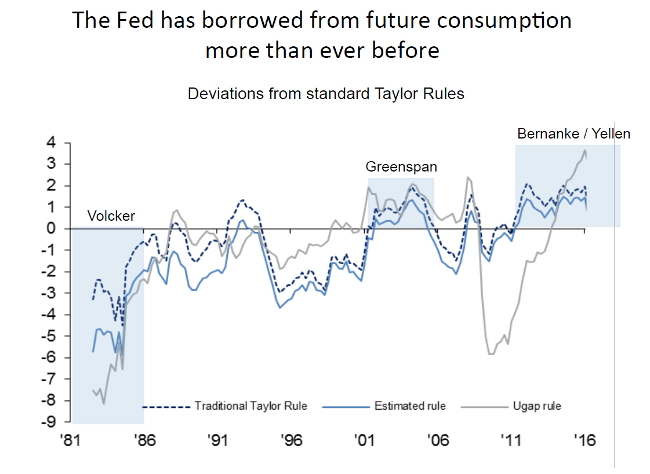 Meanwhile, corporations have largely followed the Fed's lead. While debt levels have soared, the effectiveness of debt burdens is tanking.

Buybacks may mask the effect in earnings-per-share metrics, but total earnings before interest, taxes, depreciation, and amortization shows how counterproductive the current allocation of cash and debt to buybacks has been: 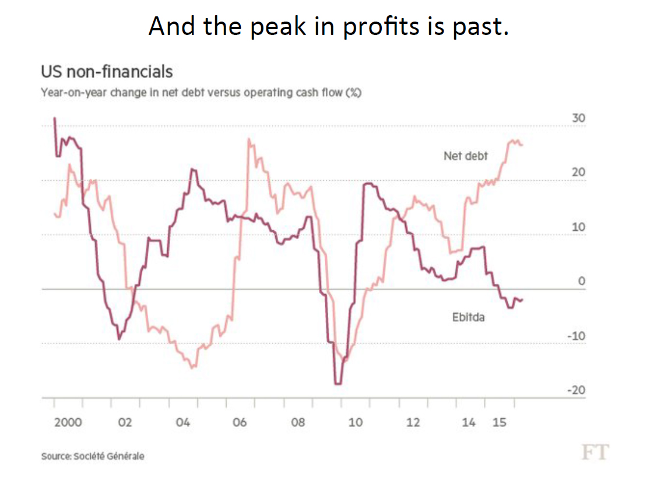 As Druckenmiller points out: “The doves keep asking where is the evidence of mal-investment? As you can see, the growth in operating cash flow peaked 5 years ago and turned negative year over year recently even as net debt continues to grow at an incredibly high pace. Never in the post-World War II period has this happened.“

There is a silver lining here. Retail investors, free to find a much broader range of dissenting voices in financial coverage today than ever before, are looking past the “expert advice” that has shielded institutional investors from losses by perpetuating failed paradigms until their equity exposure is sold off.

A good indicator of this can be found in recent inflows and outflow measures, as I discussed two weeks ago.

In case you missed it, the only major category of stock buyers in recent months has been corporations. The $450 billion they are expected to pour into their own shares offsets $225 billion in outflows from all other investor classes.

Without that, there would be a $225 billion outflow this year alone. Now, it appears that is spreading and intensifying.

While buybacks are going to have a big year, retail investors are reducing risk by ditching exposure to stocks.

Outflows have been seen across the board from ETFs, but one sticks out in particular, the iShares high yield corporate bond ETF HYG has seen $3.6 billion in outflows last week alone. This is twice the previous record.

At the same time, gold ETFs are seeing a large inflow this year. Just this last week, $1 billion poured into the SPDR Gold Trust ETF (GLD). This is the largest inflow since November 2011.

What is happening, in aggregate, is abundantly clear. Investors are looking at the rotten core of this market, removing funds from the riskiest investment types, and cycling a big chunk of it into the tried-and-true safe haven.

Druckenmiller ended his presentation with the quote featured in today's headline: “Policymakers have no end game, markets do.”

We're seeing that start now. While policy makers delve into the impossible-to-sustain insanity of negative interest rates in some countries, and as the Fed keeps monetary easing in full force, smart investors are rotating into profit-making safe haven positions.

Druckenmiller certainly has a record of success. His firm averaged annual returns of 30% from 1986 to 2010, when he closed the firm. He has $323 million in a gold ETF (note, this isn't included in the weekly total above).

He isn't alone among big-name fund managers either. John Paulson recently bought a stake in a small gold miner, only the third time in his long career that he has done such a thing.

Other hedge funds and investment managers are piling in, alongside retail investors who are driving near-record demand for physical gold and silver as well.

The market has decided it is past time the policymakers figured out an endgame, and it is taking matters into its own hands.

Take advantage of this pivot. Strongly consider curtailing more funding in high-yield corporate bonds and risky equities, at the very least. Even better, look into ditching them altogether.

And if your allocation to safe haven investments like gold is underfunded, consider pivoting to them to avoid the worst of what may come. Take the time to research what historic precedent shows to be one of the best ways to profit from this kind of market.