Your Retirement Is Safe... for Now

Do this TODAY for tax-free profits.

Tomorrow’s the final day for U.S. troop withdrawal from Afghanistan.

When Biden closed Bagram Airfield on July 5 and issued a statement three days later saying a Taliban takeover of Afghanistan was not inevitable, we all held our breath.

The numbers added up... sort of. He claimed it was 300,000 Afghan army forces versus 75,000 Taliban. But a recent U.S. military and intelligence assessment shows those numbers were backward, with the Afghan forces numbering 75,000–90,000 and the Taliban numbering 120,000 strong.

Numbers are one thing; time is another. The Taliban is known for saying, “You have the watches. We have the time.” It doesn’t cost them much if anything to sit and wait it out in battle, but it costs the U.S. and its allies millions just to be on the ground. And after some training videos emerged of Afghan army troops unable to perform jumping jacks and reports of drug-taking within the ranks... it’s no wonder they turned tail. But we can't blame this on them.

What’s really disgusting are the millions of dollars’ worth of high-tech weaponry and vehicles — paid for with American tax dollars — that the Taliban has now seized. The latest reports include 600,000 assault rifles, 2,000 armored vehicles, and 40 aircraft, among them U.S.-made small arms, grenade launchers, explosives, drones, and Black Hawk helicopters... not to mention optics, scopes, night-vision goggles, and training manuals.

National Security Advisor Jake Sullivan and Pentagon spokesman John Kirby noted that the White House doesn’t even have an inventory of what weaponry fell into the Taliban’s hands or the number of U.S. citizens still in the country...

It’s tragic what’s happened. I think it’s unnecessary. I think we’ve made a serious mistake in doing this in this way. It’s not just about the Afghan people. It’s about us and our security. Because you’ve now got this group back in charge of Afghanistan. They will give protection and succor to al-Qaeda. You’ve got Isis already in the country trying to operate at the same time. You know, you look around the world and the only people really cheering this decision are the people hostile to Western interests.

And he was right, as a suicide attack rocked the gates of the airport last Thursday killing 13 U.S. service members and dozens of civilians. Our hearts go out to everyone hurt by this mess.

We all know this isn’t over, not even close. Biden even openly remarked last week that the U.S. will carry out drone attacks in the region and may bomb the larger equipment we left behind...

But the elephant in the room is the heroin trade. According to the United Nations Office on Drugs and Crime (UNODC), 80% of the world’s heroin supply comes from Afghanistan. 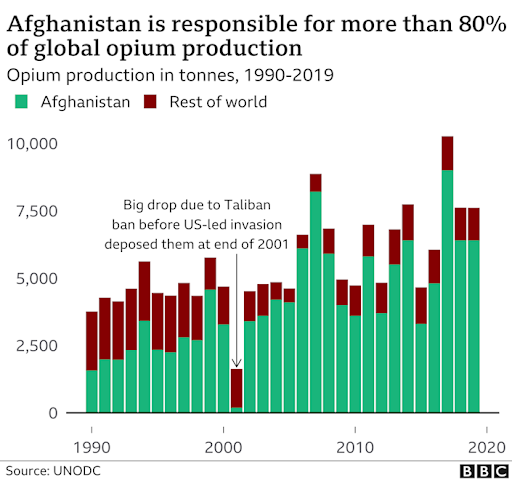 Add it all up and this war is just getting started.

Our government has lost control and doesn’t know how to take ownership.

So when I hear that Congress wants to take control of our hard-earned money in individual retirement accounts, my ears perk up.

Let’s look at another bright idea from our keepers in Washington, one that could impact your wallet.

Grab Your Tax-Free Profits Before It's Too Late

The namesake of late Senator William Roth, the Roth IRA was introduced in 1997 as part of the Taxpayer Relief Act. It’s an individual retirement account in which investors can contribute post-tax dollars and withdraw that money tax-free after the age of 59 1/2. As of 2021, you’re limited to contributing $6,000 a year to a Roth, or $7,000 if you’re over 50 years old. You can withdraw contributions at any time without penalty, but you can’t put that money back into the account or take profits early without paying a 10% penalty in addition to capital gains taxes.

You can even open a self-directed Roth IRA, which allows you to essentially use it as a brokerage account to buy stocks, options, and private, nonpublic companies.

This is different from a traditional IRA, which allows investors to deduct contributions up to $6,000 from their taxable income for the year. However, money in a traditional account is taxed upon withdrawal.

Both funds have their advantages and disadvantages, but the Roth IRA has Congress drooling after a ProPublica report found that more than 3,000 Roth IRAs have over $5 million in them. That's a lot of money that'll never be taxed.

For example, after co-founding PayPal in 1999, Peter Thiel opened a Roth IRA and funded it with $2,000. Thiel traded individual stocks within the account and paid just $1,700 to buy 1.7 million shares of PayPal trading at $0.001. He then sold some shares within the Roth after PayPal became wildly successful and reinvested the money in other companies, including pre-IPO shares of Facebook.

Thiel’s IRA ballooned and now sits at more than $5 billion. Even Mitt Romney got in on the Roth action and grew his account to $105 million. These are outliers, however, as Roth IRAs are restricted to those making more than $140,000 a year as a single taxpayer or $208,000 for a married couple.

But there’s something called a backdoor Roth IRA, which allows high-income earners to fund a traditional IRA and then convert all of it to a Roth without penalty. Congress views this as the uber-wealthy using a loophole to shield their money from taxes, and it’s a valid argument.

You can see why members of Congress have introduced bills to fiddle with retirement tax laws. Now, many are frightened it’ll do something drastic like cap profits within the Roth, limit the types of companies investors can buy, or ban Roth IRAs altogether, but the most likely scenario is a ban on backdoor Roth IRAs.

So don’t worry yet. And don’t let this deter you from opening a Roth IRA. You should 100% open an account today if you don’t already have one... Your future self will thank you.

In June, I mentioned two cryptocurrency funds that would work well in a retirement account: Grayscale Bitcoin Trust (OTC: GBTC) and Grayscale Ethereum Trust (OTC: ETHE). As of this writing, they’re up roughly 39% and 50%, respectively. Not a bad way to play the volatile crypto market without risky exposure.

And in July, I said Airbnb (NASDAQ: ABNB) looked like a solid play on the reopening of the economy. As of this writing, it’s up 5.7% on news that it’s allowing anyone to use the app to house Afghan refugees.