You Have No Idea What's Coming

I would love nothing more than to sit here and enumerate to you all of the ways in which the war in Ukraine will affect the economy and your portfolio going forward.

And anyone who says otherwise is a liar.

Remember, I was one of the few people who actually saw all of this coming.

And I don't just mean two weeks ago, when I backed up Luke Burgess' call on triple-digit oil prices, or three weeks ago, when I told you that Russia was going to upend our global order by invading Ukraine, or two months ago, when I implored investors to revisit defense contractors, or last summer, when I doubled down on my own prediction of an oil price spike, or a full year ago when I said gas prices would surge from under $2.50 per gallon to more than $4.00 and prove to be a nightmare for the Biden administration...

I mean in 2014, when I described Russian policy as "nativist, insular, and corrupt," warned that the country's leadership had "painted themselves into a corner," and flatly stated that Vladimir Putin's obsession with Ukraine would "only hurt Russia's economy."

That's what I'm referring to — the eight years I've been trying to convince people that Russia never really let the Cold War go and that it represents a catastrophic threat to the global economy.

And now that that sentiment has gone mainstream, and everyone has suddenly become an expert overnight, we're awash in opinions about what this means going forward.

But this time around, analysts would be far better off embracing their ignorance. Because this is different.

Make no mistake, what we are witnessing is the most disruptive geopolitical event since 9/11.

That's the last time a rogue power sought to upend the global order in violent and dramatic fashion. And just think about how broad and lasting the consequences were. From increased security measures at airports and stadium events to the war on terror and the invasion of Iraq and Afghanistan, which we just finally abandoned last year.

Think about how our collective psychology changed — how people came to view the world and each other.

And now, it's all happening again — the same, but different.

Europe has seen its share of wars, but not since WWII have we seen an imperialist warmonger attempt to swallow another sovereign country in this way.

Trade wars and embargoes have been around since the dawn of commerce but in the history of the world, there has never been a more concerted effort to destroy a nation's economy — to isolate, undermine, and ultimately destroy one of the world's key economic engines.

And that's what Russia is.

Indeed, it may not be among the world's elite economic contributors, but Russia still has the 11th largest economy in the world. It's one of the world's top energy producers with crucial deposits of oil, gas, and uranium.

All told, Russia is the no. 1 producer of diamonds and palladium (a key component of catalytic converters) and the second-largest producer of titanium, vanadium, and natural gas.

It's also the world’s third-largest oil producer, behind the U.S. and Saudi Arabia, and the world’s largest exporter of oil to global markets.

It's this vital role in global trade that, in part, led Vladimir Putin to believe he could get away with such a blatant violation of international norms.

Of course now he's finding out the hard way that invasions aren't as easily orchestrated as publicity stunts and that there's a heavy cost to imperialist ambition.

The sanctions so far deployed by Western nations have already had a debilitating effect.

The Russian stock market was shuttered on Monday and still hasn't reopened. It's been four days.

The ruble plummeted to an all-time low practically overnight. Typically, Russia would support its currency by dipping into its massive stash of foreign currency reserves to buy rubles. But it can't do that now, because half of that $640 billion war chest is held in foreign banks which have been barred from transacting with Russia's central bank.

Russian banks have also been banned from the SWIFT international payments system, which means they can't communicate with the rest of the global financial system.

As result, the Central Bank of Russia has more than doubled its key interest rate, jacking it from 9.5% to 20% in a desperate bid to stem the inflationary tide, but to no avail.

Apple, ExxonMobil, BP, Ford, Boeing, and Airbus have all joined a growing list of companies who have suspended or abandoned their operations in Russia, and may never return. Meanwhile, Russian companies trading on overseas exchanges have been eviscerated.

Sberbank, Russia's largest lender, saw its London-listed shares fall more than 95% to a penny when it was forced to forgo its European operations. And other Russian majors like Rosneft and Lukoil have suffered similar fates. 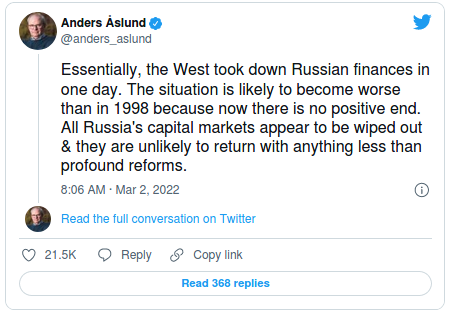 Furthermore, most every Western nation has now closed its airspace to Russian flight traffic, disconnecting the country from would-be passengers, cargo, and destinations.

This stifling blanket of sanctions has forced even Russian mouthpieces to concede that an economic collapse is underway.

Economists are now forecasting an inflation rate of nearly 20% (and you thought it was bad here in the States) and as much as a 7% GDP contraction for the year.

And it'll likely get even worse from here, especially since Russia has resorted to ruthless bombings of civilian centers to compensate for its stalled invasion.

The worse it gets, the more likely it is that Western countries heed calls to target Russia's heretofore untouched oil and gas sector.

U.S. Senators Joe Manchin and Lisa Murkowski have already introduced legislation that would ban all Russian oil imports. And House Speaker Nancy Pelosi endorsed the idea, saying "I’m all for that. Ban it."

If that happens and Europe follows suit, there would be seismic repercussions for oil and gas markets, as well as the world economy.
That's where we're at.
The West has effectively engineered the implosion of a major global trade hub. And the shockwaves from that implosion are just beginning to ripple out.
As I said, it's impossible to predict what this will all amount to, but there's no way to put all this spilt milk back in the bottle.
We're all going to be living with the consequences of this invasion for a very long time.