When the FOMC met earlier this week, Jerome Powell stuck to his story...

"Inflation continues to run below 2%," the Fed statement said, and is "running persistently below this longer-run goal." And while "indicators of economic activity and employment have turned up recently... the sectors most adversely affected by the pandemic remain weak."

As a result, the FOMC will keep its target rate at a rock-bottom range of 0%–0.25% until labor market reaches maximum employment and inflation is set to "exceed 2% for some time."

But once again, the bond market called BS as the 10-year U.S. Treasury yield surged over 1.7% on Thursday. That means the yield on the 10-year Treasury has now climbed 87% since the start of the year and 244% from its August low point.

This suggests that the bond market believes the Fed will have to raise interest rates sooner than it thinks.

Indeed, the majority of Fed members (11 of 18) continue to insist rates will remain at their record lows beyond 2023. This according to the group's "dot plot," which gives a snapshot of future expectations. 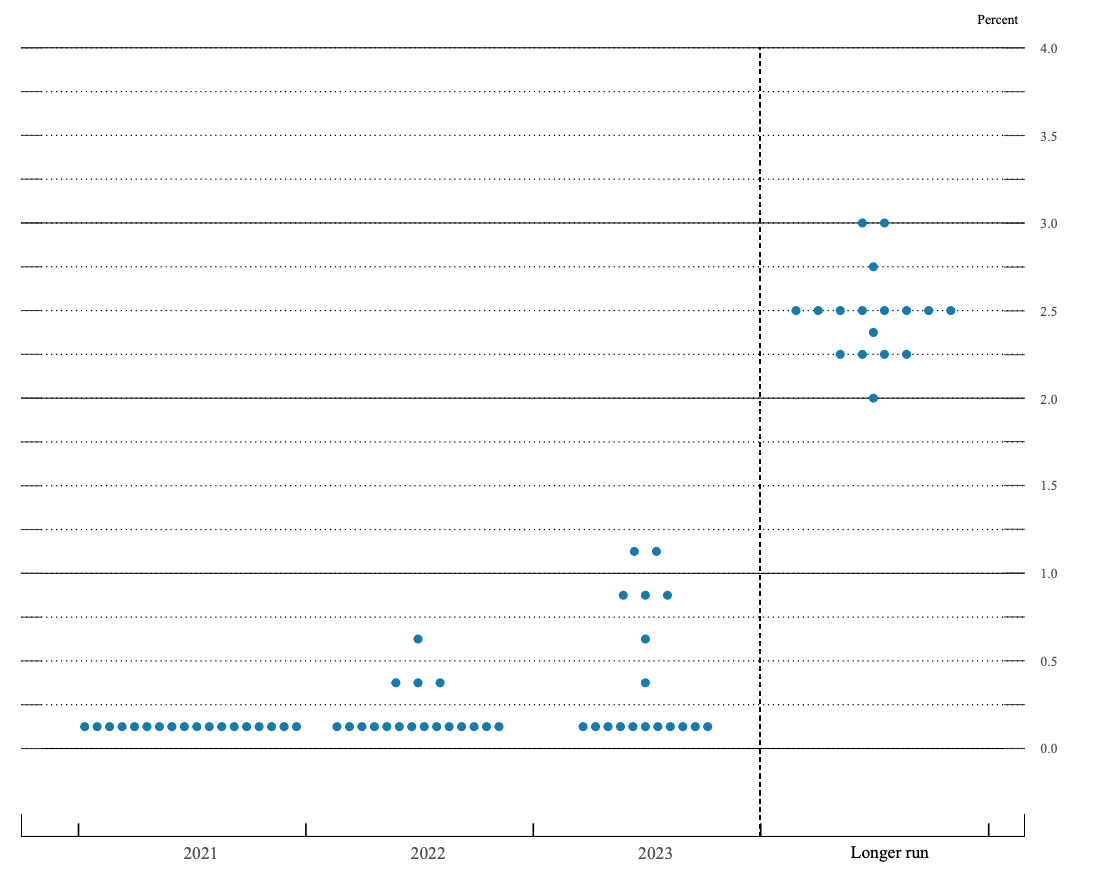 Each dot on this chart represents a member, which means just seven members believe rates will have increased by 2023, and even then, the increase is expected to be moderate.

However, an interesting note here is that that's up from five members in December. Furthermore, four of the 18 members now believe rates will rise next year, up from just one in December.

That suggests that members are starting to crack a bit.

Gradually, they're moving their forecast for potential rate increases up.

And they're right to.

Increasingly, investors and policymakers alike are coming to see inflation for the threat it truly is.

Last month, demand for 5-year and 7-year Treasuries was so weak heading into a $62 billion auction that the 7-year note sold at a 1.195% yield, or 0.043% higher than expected — a record gap for a 7-year note auction. Furthermore, the large financial firms that trade directly with the Fed and are required to bid at auctions were left with about 40% of the new notes — twice the recent average.

This, as I noted at the time, suggests bond buyers believe rates will be more attractive in the future than they are presently, and that maybe they're concerned fixed-income investments will be further undermined by inflation.

That view has been further corroborated by the 5-year "break-even" rate, or the difference between the yields on 5-year Treasuries and 5-year TIPS. 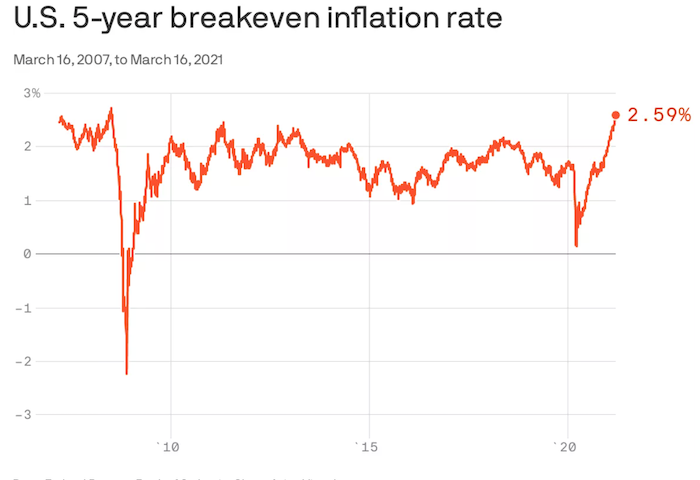 Beyond those more esoteric indicators, a recent survey of global fund managers conducted by Bank of America found that inflation has surpassed COVID as an economic threat.

Both inflation (37% of respondents) and a spike in bond yields (35%) beat out the pandemic (15%) as the largest perceived element of risk, the survey indicated.

Furthermore, 93% of investors in the survey expect inflation to rise in the next 12 months — 7% jump from February and the highest reading in the history of the survey, which dates back to 1995.

All of this falls neatly in line with what I've been screaming for the past year, which is that when it comes to inflation the Fed is in denial at best and lying at worst.

It doesn't take a degree in economics to see that, either.

Prices for food, homes, and other necessities have been climbing steadily higher along with the price of commodities like oil, timber, and copper.

Only the price of gold has lagged, and that's largely because rising bond yields present a more attractive alternative to a value store. Nevertheless, you can expect that to change when the full scope of inflation is finally realized by the broader market.

That's why now may the best possible time to invest in the yellow metal.