Their brutality is legend. They’ll wipe out whole families in a single attack. Buses full of passengers from the wrong parts of town have been burned in broad daylight.

And while most of their victims are confined to Central America, MS-13 has infiltrated the United States as well as other parts of the world.

It’s hard to stop a gang that extreme, that widespread, and that prolific. It requires every tool in the kit.

It takes boots on the ground, for sure. But it also requires a technological advantage.

One such advantage is facial recognition.

This was made perfectly evident in the case of Walter Yovany-Gomez — an MS-13 gang member, and one of the FBI’s 10 Most Wanted, who was caught with facial recognition technology.

Without it, he’d still be on the streets today.

A recent story on NPR shed light on exactly how this came to be, and I think you should hear it…

Walter Yovany-Gomez was a Honduran national who was in the U.S. illegally.

He was also a member of an MS-13 sect operating in Plainfield, NJ.

In the spring of 2011, the group’s leadership ordered Gomez and another man, Cruz Flores, to kill a potential recruit, Julio Matute.

Matute had allegedly disrespected MS-13 by associating with members of a rival gang. So on May 8, 2011, Gomez and Flores spent an evening at Matute's apartment drinking, smoking weed, and watching TV. Then they beat him in the head with a baseball bat, stabbed him 17 times in the back with a screwdriver, and slit his throat.

By 2016, Flores and the gang leaders had been arrested, tried, and convicted, but Gomez remained at large. 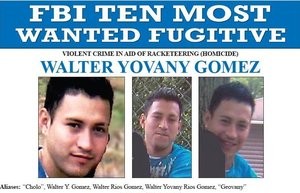 Shortly thereafter, they got a tip and a possible lead.

The tipster said he recognized the man in the most-wanted poster, but knew him by a different name.

The tipster appeared legitimate, and after a few meetings, he provided more information to help push the investigation forward, including Facebook profiles that had pictures of Gomez.

The FBI pored through the Facebook pages and downloaded dozens of photos. They were then sent to the agency’s FACE Services Unit, which compared them to an FBI database.

They got a reply within a week.

The FACE Services Unit had found a match, but for the name Jesus Lopez Centoreo.

Centoreo had been picked up for marijuana possession in 2014 after jumping a metro turnstile in Arlington, VA. He had gone through initial processing — his fingerprints were taken and he was photographed for a mugshot — but was then released. He didn't show up for his court date, and so a warrant had been issued for his arrest.

At this point, the FBI was pretty certain about who they were dealing with, but they still had to find him.

Well, it turns out that the Facebook posts also had pictures of his girlfriend.

So they ran her photos through the bureau's facial recognition software, too.

Again, they got a match from the criminal mugshot database, as well as the woman's name and address.

With that, law enforcement began keeping tabs on her, staking out her residence.

Sure enough, as they tailed her to the parking lot of a local gym in Woodbridge, VA, a man who looked like Gomez/Centoreo approached her car.

Taskforce members swooped in and made an arrest.

The officers showed the man the most-wanted poster that named Gomez and asked whether it was him.

Last month, a federal judge sentenced him to 25 years in prison.

The Future of Facial Recognition

What this episode shows is just how helpful facial recognition can be to the law enforcement community and the public at large.

Without it, a bloodthirsty gang member would still be roaming the streets of Virginia. With it, he’s in jail.

But what’s important to remember, as an investor, is that this is just the beginning.

This is an evolving technology.

And that’s why I’ve recommended a forward-thinking facial recognition company to my Wealth Warrior subscribers.

The company’s software is housed in digital advertisements, drawing in revenue from advertisers who use it to gauge their audience and track impressions.

But in addition to reading the mood, gender, and age of its advertising targets, the software also scans them for weapons (it has more than 500 in its database), and can even compare faces to image caches like the FBI’s 10 Most Wanted list.

To be clear, we’re talking about a secret camera disguised as a digital advertisement — criminals have no idea it's there — that can scan for weapons, wanted criminals, and known terrorists.

They won’t even know they’ve been caught.

That’s an incredible tool for law enforcement, and an amazing investment opportunity.

So I encourage you to check out my report on that here.

Facial Recognition Takes Over the Skies
Last week, Delta Air Lines became the latest airline company to climb aboard the facial recognition bandwagon.
New Tech Makes Schools and Summer Camps Safer
It’s almost like every headline I see is a fear-inducing scare-piece about how some dark entity is going to steal your face. Facial recognition is getting a bad rap and this company will show you why...
In the Facial Recognition Debate, I Side with Democracy
Earlier this month, San Francisco banned local government agencies from using facial recognition technology. And you know what? I applaud them for it.
Look at my Face!
Outsider Club editor Jimmy Mengel informs investors why facial recognition is the next big tech trend and what you can do to capitalize on this opportunity today...
Heal Your Ailing Portfolio Body