They have been for about four years now.

And I'm positively thrilled about it.

This is like one big Black Friday sale. I'm looking at everything — gold, silver, uranium, copper, soybeans... I saw an article today predicting $26 oil.

See, with commodities, it's all about the cycle. It ebbs and flows almost predictably.

People always say they want to buy low and sell high, but in practice they abandon that simple principle. They go chasing the investments that are already soaring and steer clear of the “losers.”

Commodities on the other hand, well, take a look...

The worst performer there at the end is rhodium. The next two are nickel and iron ore, each down more than 30%. Lumber, palladium, and copper aren't far behind. It's not just industrial material, either. Foodstuffs like coffee, oats, cattle, hogs, and soybeans are among the losers, as well.

Do these sound like things the world can do without?

Of course not. They're just in a bad place right now. The dynamics of supply and demand are out of favor.

But here's the secret about commodities: They're elastic. As they get cheaper, demand increases and supplies shrink. It happens every time. 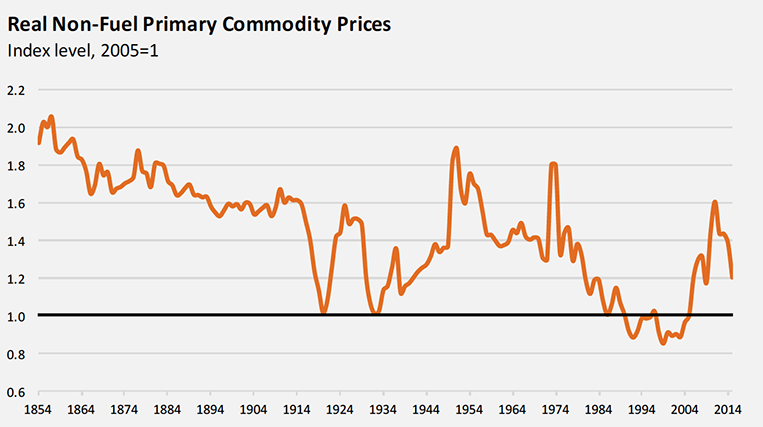 This chart shows how commodities have performed over the last 160 years.

As you can see, every sharp decline is followed by an equally dynamic rebound.

Each boom and bust cycle lasts about seven or eight years. The down-cycle we're witnessing right now began back in 2010. So if the pattern holds we'll see another boom begin around 2017.

That's not a given, of course. These cycles can be extended by overarching circumstances.

For instance, the boom cycle that began in 1933 was exacerbated by World War II. As a result, it lasted almost two decades. Similarly, the commodity price collapse that occurred from 1974 to the late 90s was exacerbated first by Fed Chairman Paul Volcker's war on inflation, and then the collapse of the Soviet Union.

These kinds of watershed events are atypical but they do happen. Still, it doesn't change the fact that the trend always reverses. It's the commodities super-cycle. And profiting from it is just a matter of patience.

Eye of the Beholder

Last month, I talked about how production would be hamstrung by lower prices. The truth is, $40 oil has many producers and governments operating at a loss.

Yes, global growth is slow. And it may take some time to eat into the oversupply. But I fully expect the market to reverse course by 2017.

I'm even more bullish on uranium.

Uranium is one of the few commodities that hasn't gotten trounced. It's traded roughly flat over the past year. That's because, here, the supply-demand fundamentals have already begun to turn.

Uranium demand is set to outstrip supply next year, leading to a 60,000-tonne shortfall by 2018. This is happening just as countries like Russia, China, and India are expanding their nuclear power programs.

Over the next 10 years, we're going to see uranium prices more than double, surging from less than $40 per pound today to more than $80 per pound in just a few short years.

I like silver, too — more so than gold, in fact. As with oil and uranium, I don't expect to reap my reward overnight. In fact, I'm hoping it falls further over the next year or two.

Currently trading at less than $15 per ounce, I anticipate a rise to $30 per ounce when the next upswing hits. To that end, I would love to see silver prices fall to $10 per ounce, or even into the single-digits.

The lower it goes, the happier I'll be to buy it.

I like their prospects over the short and long term.

That said, I'd avoid industrial metals like copper and nickel. These metals will eventually come back into fashion, but not for a while. They've got a few more years of pain ahead before they stabilize. Even then, the ceiling isn't especially high.

I'm also wary of agricultural commodities. They can be expensive to store, and they're subject to fickle harvests.

Obviously, these are my own personal thoughts on the subject right now. I've got my own investment horizon and expectations. They may be vastly different than yours.

Personally, though, I get really excited when I see prices fall. Especially when it comes to commodities. Unlike companies, they don't go out of business.

Get 50 Basis Points Off All Silver & Gold Purchases!
Join Outsider Club today...
And we'll send you a Discount Code
From our Trusted Bullion Dealer

After getting your discount code, you’ll begin receiving the Outsider Club e-Letter, delivered to your inbox daily.

Resource Sector Update
I know individual mining companies with world-class gold, silver, platinum and palladium assets that have lost upwards of 80% of their value. With a resource bull market never having lasted this long, a turnaround has been widely anticipated.
Anatomy of a Crash: China Today, America Tomorrow
No economy is immune to disaster. Not China and certainly not the United States. What happened there can, and will, happen here.
Reversion To the Mean: Proof A Market Crash Is Coming
Nobel Prize-winning, Yale Economics Professor Robert Shiller thinks a correction is coming. And he's got some compelling evidence.
2016 Oil Outlook
Oil prices have not had a good year. The good news, however, is that the worst is over. Oil has effectively bottomed.
Uranium Will Be 2016's Best-Performing Commodity
In a bad year for metals and commodities in general, uranium has been the lone bright spot. And 2016 is poised to be an even bigger year for uranium prices.
Heal Your Ailing Portfolio Body