Why Elon Musk Is Suddenly Afraid of Putin

A few weeks ago Elon Musk took me — and really, all of us — by surprise when he tried to broker an end to the Russian invasion of Ukraine on Twitter. 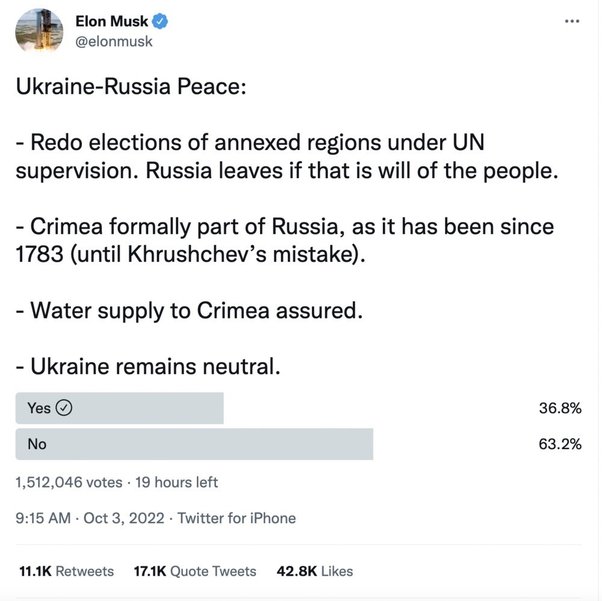 Now, there’s a lot to unpack here, but one thing that really stood out to me was the parenthetical “(until Khrushchev’s mistake).”

That is straight-up, unadulterated Russian propaganda. It’s literally something that comes from the Kremlin.

That’s obvious because no one outside of Russia would ever impartially describe a sovereign country gaining independence as a “mistake.”  This perspective can only come from the colonizing power lamenting the loss of its colony.

The clear implication is that Russia possessed Ukraine but somehow fumbled it away as one would drop their car keys.

Truly, in a message that is laden with Russian propaganda, that parenthetical really gives the game away.

So where did Elon get this “proposal” from?

Apparently, Vladimir Putin, himself. At least, that’s according to Ian Bremmer, the founder and president of the Eurasia Group, who responded to Musk thusly:

Furthermore, Putin, according to Bremmer, told Musk that Ukraine would have to concede Crimea as well as the Luhansk, Donetsk, Kherson, and Zaporizhzhia regions (which Russian forces are currently abandoning), and declare a permanent neutrality.

In other words, a near complete surrender.

And on top of that, if Ukraine even attempts to retake Crimea, he’ll go nuclear.

OK. So we’ve gotten this far.

We know that Putin is adept at manipulating rich, egotistical influencers. And we can see that happening here.

But there’s one more piece that needs fitting in.

So when Vladimir Putin called Elon up, it wasn’t just to float a trial balloon for a peace plan to end the war…

It was to intimidate him.

And this week the subtext became explicit when Konstantin Vorontsov, an official in Moscow’s foreign ministry, said that Russia would consider shooting down any Western satellites that are aiding the Ukrainian resistance.

Putin didn’t just lobby Musk to float his lopsided peace plan; he threatened to shoot down his satellites.

That’s why Elon peed his pants. And that’s why he threatened to revoke Ukraine’s access to his Starlink satellites unless the U.S. government handed over $100 million.

Musk has reportedly refused a Ukrainian request to activate Starlink in Crimea. And Ukrainian forces are suddenly now experiencing connectivity issues as they carve deeper into Russian-controlled territory.

If I were a billionaire tech mogul, I wouldn’t want my satellites shot down either.

And in fact, our reliance on satellites of all kinds makes us extremely vulnerable.

Sure, they’re providing imagery of Russian troops and weapons formations, along with mass grave sites and evidence of war crimes.

And that, increasingly, makes them a target.

In just the past few weeks, Russia has significantly ramped up its attacks on Ukrainian civilian targets and infrastructure, damaging at least a third of the country’s power system.

And now Russia is not-so-subtly threatening to attack nuclear plants by presupposing Ukraine will use a “dirty bomb” as a false flag.

This whole conflict was ugly from the start. And now that Russia is losing, it’s getting even uglier.

Russia may well start targeting our satellite infrastructure as a way of retaliating against Western support of Ukraine.

And that could be the least of our worries if Putin does go nuclear or we get drawn into a global war.

Everyone needs to be ready. And that includes safeguarding your wealth by investing in the companies that will be called upon to defend us.

You can find out more about those in my Secret Stock Files newsletter here.