You’ve heard me ramble on about the power of following legal insider trading.

I’ve got to admit, I started to bore myself.

That’s because there was a severe lull in the broader markets and it kept raining on our parade.

But as I’ve said many times, when the market drops, you need a strategy that gives you the upper hand.

Main Street has been floundering…

Investors aren’t sure what moves to make.

The way I see it, you’ve got to look behind the scenes and find foolproof ways of making profitable trades.

Take a look at this chart... 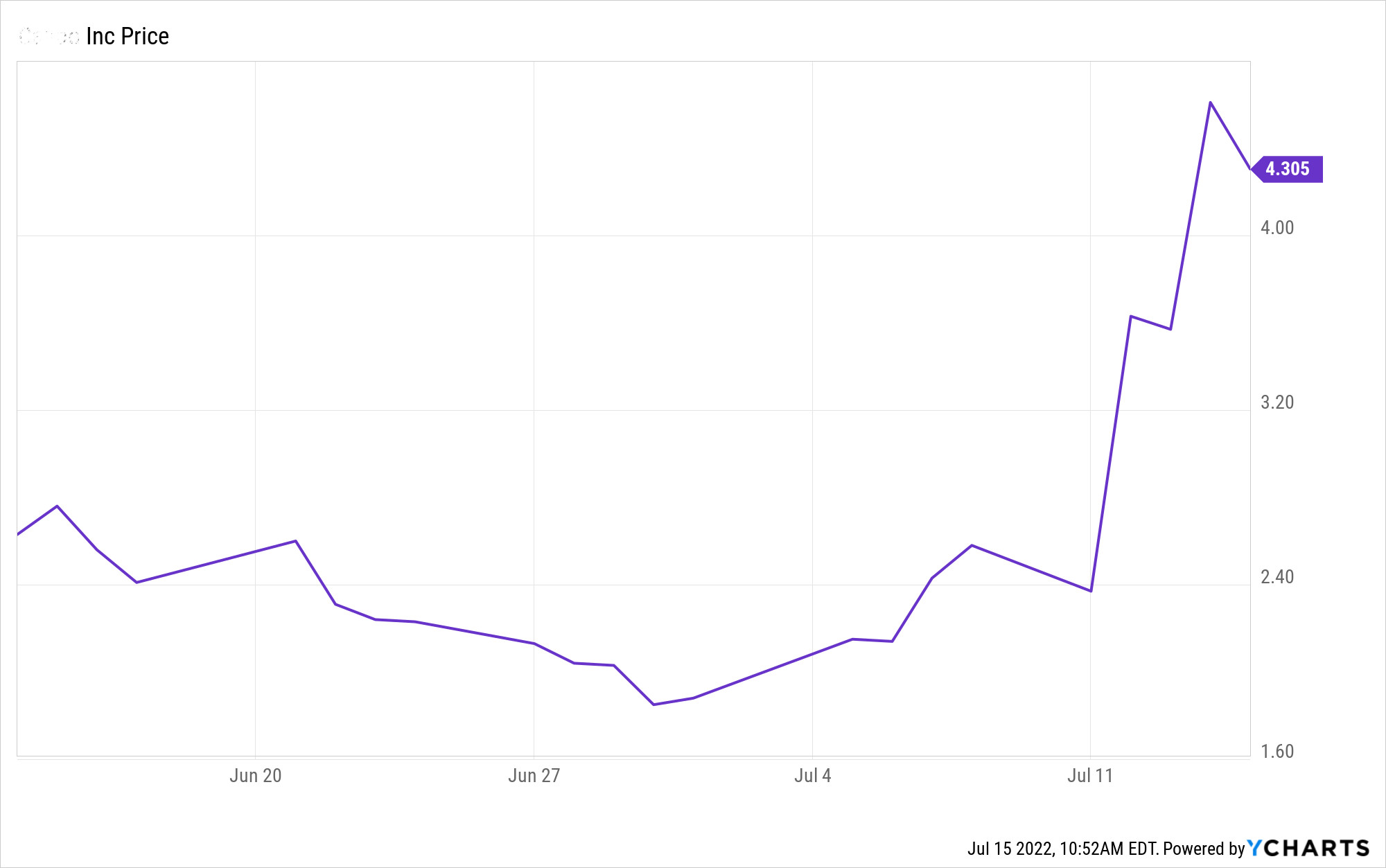 I can’t give away the name of the ticker since it’s still an active trade in my model portfolio.

But I can drop you some hints.

If you look closely, you’ll see something incredible.

All while the rest of the market crashed.

Now, subscribers to my investment advisory Insider Stakeout have known about this stock since I recommended it in April.

I recommended it again two weeks ago.

The funny thing is, the mainstream media had no idea the company even existed!

This headline proves the point...

So how did we know about it before everyone else?

Well, last November, I was poking around looking at Form 4s (the form required for corporate insiders to file with the SEC when they make a stock trade in their own company) and found that the CEO of a little-known EV startup purchased $230,000 million worth of stock at $6.53.

That’s a huge purchase for a company that isn’t making any money.

Not far behind, a director and institutional investment firm bought stock as well.

That really piqued my interest.

Did they know something the general public didn’t?

Why would they be buying so much stock?

Looking a bit deeper at the CEO, I found that he’s a successful entrepreneur, so he wouldn’t plop down $230 million for no reason.

There was some good news following the purchases, including a partnership with NASA.

Then it was rumored Apple might buy the company...

That didn’t move the needle for the stock, though. It still trended down with the rest of the market.

But then something important happened...

You can see whether a stock is oversold by using the relative strength index (RSI).

RSI calculates the velocity and magnitude of price movements within a 14-day period.

Typically, an RSI reading below 30 means a stock’s oversold.

I like to look at the RSI because often there’s a reversal once it dips below 30.

Sometimes it's a small reversal, but not in this case.

I finally pulled the trigger on the company at $2.11 two weeks ago.

Then all the news started flooding in.

Both Walmart and the U.S. Army inked deals with the company.

And the stock price soared over 100% in ONE DAY!

That's an easy way to double your money.

This is the essence of my Insider Stakeout service...

Did we know the details of any of these deals?

Because we’re not the C-suite executives or institutional investment firms.

But you better believe the insiders at the company did when they made those stock purchases.

The beauty of following insider transactions is you don’t have to know about every future deal or even the detailed balance sheets.

But when you see an insider buying $230 million worth of stock, it sends a clear “buy” signal.

My point is this: If you follow the insiders who are confident in the future prospects of their own company, you give yourself a shot at these types of triple-digit wins.

So if you want more insider trades just like this, you can sign up for a risk-free trial to my newsletter here.

I hope to see you on the other side.