Since May of last year, when Resource Stock Digest Premium launched, I’ve tried to articulate that the old rules when it comes to investing, speculating, and trading no longer apply.

Let me explain. Fundamental and technical analysis are still valuable tools, whether speculating or trading, but they are tools that are less effective in today’s world than at any other time in history.

The rapid flow of information brought about by the influence of social media now requires a thorough awareness of geopolitical events and the potential consequences of those events when considering a speculation, trade, or investment.

On January 11, 2017, Bloomberg published an article titled “The Three Worst Currencies of 2017 Show That Politics, Not Economics, Are Driving Markets.”

It went on to highlight that politics are trumping (no pun intended) economics in the world’s foreign exchange markets.

The article went on to explain:

“These laggards "all face significant political headwinds: terror attacks and government interference in monetary policy in Turkey, Brexit-dithering in the U.K., and fears of U.S. protectionism in Mexico. The takeaway, two weeks into the year, is that as expected, politics is at least as important as economics in driving markets in 2017.”

So what should we be paying attention to the rest of the year?

Once again, anti-immigrant and anti-establishment sentiment has put in question whether Chancellor Angela Merkel can retain power in the upcoming German elections, which must take place before October 22, 2017. 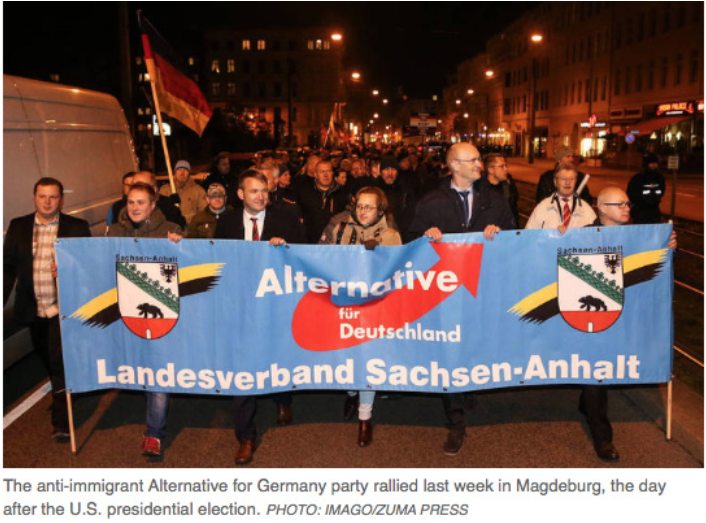 The Wall Street Journal reported this month that Ms. Merkel’s approval rating stood at 52%, down from more than 70% in the summer of 2015, according to pollster Infratest Dimap. Her party is polling in the low-30% range, after winning 41.5% of the vote in a 2013 federal election.

The same anti-establishment sentiment that exists in Italy is very much alive and well in France and Germany.

The spring presidential election in France is shaping up to be an important one as well.

Among Le Pen’s agenda items are leaving the European Union, ditching the euro, and securing the borders. This is the world’s sixth-largest economy.

She’s not currently favored to win, but neither were the pro-Brexit crowd or Donald Trump. With 10% unemployment — near a record high — months before the election, it would not surprise me to see Le Pen’s popularity gain traction among “undecided” voters.

Elections in France are multi-round affairs and ultimately decided by the popular vote. She’s expected to make it into the second round, though most polls currently have her losing. These are the same pollsters that forecasted Brexit and the Trump presidency inaccurately.

FYI she’s also a fan of Vladimir Putin, isn’t sold on climate change, and has called globalization “another kind of totalitarianism.” Sound familiar?

Should Le Pen win, the ramifications from this election, like the Italian referendum, could be potentially fatal to the sustainability of the euro, which will have an impact on banks, currencies, bond markets, and the precious metals space.

Elections in Germany and France will add to the political risks that the euro, a currency that is structurally flawed, faces.

The global war on cash will also play an important role in the how the dollar performs.

The ability of the Fed to make good on its promise to raise rates in 2017 will provide headwinds for precious metals prices.

While the European Central Bank and the Bank of Japan continue running aggressive quantitative-easing programs, the Federal Reserve has promised three hikes in 2017.

I don’t believe the economy is strong enough to justify three hikes but if the major stock indices continue to establish new highs — and they will — there will be many calling for at least one rate hike to contain asset bubbles.

Even one additional rate hike will lead to a surging dollar — even from today’s levels — that will catch many off guard.

“Although China’s GDP grew 11-fold since 2000, total credit in the economy grew over 40-fold, resulting in a total debt to GDP ratio rising from 100% to 400% (if one counts the infamous shadow banking system).

"This credit bubble has now burst, as evidenced by the crash in the stock market, the rolling crashes in local real estate markets, as well as the massive capital flight out of China.”

Capital from Japan, Europe, and China simultaneously looking for a home in the U.S. will provide one last kick to the rear for dollar bears.

Some context is important. Below is a chart from macrotrends.net of historical data showing the broad price-adjusted U.S. dollar index published by the Federal Reserve.

The index is adjusted for the aggregated home inflation rates of all included currencies. 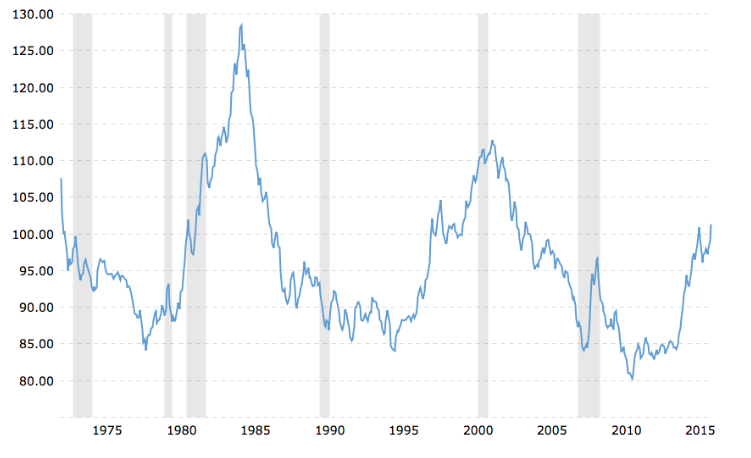 The price adjustment is especially important with our Asian and South American trading partners due to their significant inflation episodes of the 80s and 90s.

That surging dollar will limit gold’s rise in 2017, but in a best-case scenario that surge happens in the first half of the year and not the second half.

In the meantime I’ve provided several picks in the Resource Stock Digest Premium portfolio that offer excellent diversification in sectors outside of the precious metals space.

I’ll add that although I expect lower prices in the short-term, lower prices haven’t prevented the portfolio’s best performer from putting in a triple-digit gain. It’s done it with the drill bit, even in a down market.

Every company in the portfolio has multiple potential catalysts that will take them higher in the next gold bull but just as importantly can provide significant returns, even with lower prices.