What The Fed Fears Most

I’ve explained before that global growth was slowing and that Fed Chairman Powell had blinked. That blink has quickly blossomed into a full capitulation.

I don’t believe the rate hike planned by the Fed in 2020 happens and, as I explained last month, I believe we will get a rate cut — not a hike — in the second half of this year or early next year.

So why the capitulation in such obvious fashion?

It was just in January of this year that the Fed said it would take a ‘wait and see’ approach to the previously announced three or four rate hikes scheduled for this year. There apparently is no more waiting.

I’ve told you before that deflation is the one thing all central bankers fear because you can’t inflate your way out of debt in a deflationary environment. In the end, the math doesn’t lie.

U.S. debt stands at $22.5 trillion and major cuts in social programs are being used to help subsidize the unnecessary and ineffective Trump tax break.

Total U.S. consumer debt, including revolving and non-revolving debt, now stands at more than $4 trillion, the most ever. 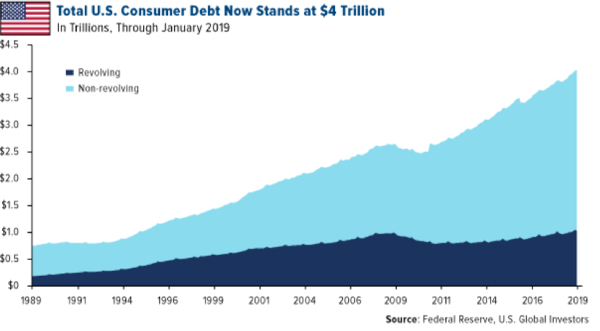 Here’s another interesting stat from the people over at U.S. Global Investors: revolving debt, such as credit card debt, is now valued at more than $1 trillion, which exceeds the all-time high right before the financial crisis.

According to the Federal Reserve Bank of New York, people age 60 and older owe about a third of this total.

Do you make eight times more than what you made in the 80s?

I highlight all this to explain to you why negative interest rates are coming to the U.S.

We are the only major economy that hasn’t yet dipped our toe into the negative rate waters.

That matters to those of us who have weathered the brutal bear market in precious metals. Why?

Simple answer is if you — the speculator — are looking for ways to diversify your holdings and you are faced with the option of deploying capital into treasuries where you are guaranteed a loss, you may want to take a bit of that capital and park it in gold and the related equities.

Think about this: one fifth of investment-grade debt now rewards the investor with a negative yield. 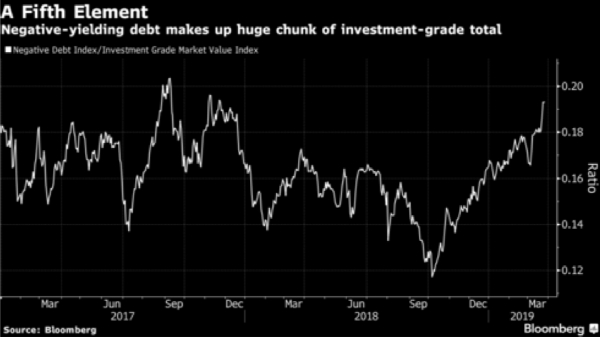 It doesn’t take a lot of money from treasuries — the biggest and most consequential market in the world — to creep into the gold space to see a bull market that should surprise even the most ardent of gold bugs.

In March, Finland’s entire coalition government resigned a month ahead of the general election due to its inability to deliver on a promised health care package that it said was critical to the government’s long-term finances.

Does the health care and government finances part sound familiar?

Finland and the Nordic countries are experiencing the consequences of a socialist economy where the math no longer makes sense but the populace demands the same level of benefits.

The reforms expected to generate savings by creating 18 new regions to organize health care services instead of the 200 entities that are currently responsible.

Sweden is to gradually raise its retirement age because that’s one of the few things a country can do if it’s not willing to cut.

It’s the “kick the can down the road” approach that got us into this mess in the first place.

Sounds dramatic, but the writing is on the wall.

P.S. Before I go, I just wanted to share three commandments that I use in my trading strategy. These commandments flip the script on everything Wall Street is doing and I’m showing them to you for the first time. Click here to see this strategy in action.

All The Fed’s Men...
The Fed is falling for the age-old sunken cost fallacy. Its members want to dig themselves deeper to dig themselves out. Outsider Club editor Adam English explains...
Mr. Dines: What Happens Next
Luckily things are going precisely as laid out in our 2019 Annual Forecast Issue. The following is what we expect to happen next.
Confidence: Government Down, Gold Up
You can count on accommodative central banks, you can count on bigger deficits, you can count on volatility, and you can count on a higher gold price for 2019.
This Is What Will Trigger The Next Gold Bull Market
Outsider Club editor Gerardo Del Real tells readers why they can expect Dow 30,000, expect low interest rates, expect volatility from overseas to drive the dollar higher, and in the second half of this year expect a gold rally...
Investing in Marijuana Without Getting Burned
The marijuana industry has rewarded scores of investors with life-changing gains.