We Really Are Going to War with China

Normally, when we talk about a “war” with China, we mean a trade war, or a currency war.

But for at least the past decade, the prospect of an actual war-war, a military confrontation, with China has gone from hypothetical to very real.

Both sides are to blame for that escalation.

There is no doubt that China's one-party, communist government leans on its rivalry with the United States to solidify public support, distract from domestic issues, and further its global agenda.

It is equally obvious that the U.S. government does the exact same thing. Indeed, the “China bogeyman” is extremely useful to the Pentagon, defense contractors, and hawkish politicians.

The problem is, beneath all the propaganda, there's a legitimate confrontation brewing. And the nexus of that conflict is the South China Sea, where tensions continue to spiral out of control.

In the latest row, the U.S. this week decried an “unsafe” intercept operation two Chinese fighters carried out against an American spy plane.

According the Pentagon, the reconnaissance aircraft was on a routine patrol flying over the South China Sea. There, it was intercepted by two Chinese J-11 fighters that came within 50 feet of the Navy EP-3E Aries aircraft.

The altercation was reminiscent of an incident in 2014 when a Chinese fighter pilot flew acrobatic maneuvers around a U.S. spy plane, and another more dangerous clash in 2001.

You might remember, 15 years ago, an intercept of a U.S. spy plane by a Chinese fighter jet resulted in a collision that killed the Chinese pilot and forced the American plane to make an emergency landing at a base on Hainan. The 24 U.S. air crew members were held for 11 days until Washington apologized for the incident.

Furthermore, Tuesday's dispute came a week after China scrambled fighter jets to pick off the USS William P. Lawrence, a guided-missile destroyer, sailing near a disputed reef in the region. And it's just days before President Barack Obama travels to Asia for a Group of Seven summit in Japan and his first trip to Vietnam.

Finally, on April 26, the U.S. Department of Defense released its annual report on China's military to Congress, which Beijing claimed was "full of prejudice against China" and "made unfounded accusations.”

Clearly, neither China or the United States are truly interested in de-escalation. And the relationship between the two countries is only getting worse.

So in a sense, a war with China isn't just inevitable — it's already taking place.

As I mentioned, the main theater of conflict right now is the South China Sea.

You see, China has claimed virtually all of the South China Sea as its own, ignoring the claims of its smaller neighbors — Vietnam, the Philippines, Malaysia, and Brunei — and trampling the maritime boundaries established by the UN.

The area is important for three reasons:

Recently, China has advanced its claim by creating more artificial islands. In just two years, China has expanded these islands by 2,000 acres. It's also outfitting them with harbors, airstrips, military barracks, and even drilling for oil.

Last year, a U.S. spy plane, the P-8A Poseidon surveillance jet, flew over the Spratlys. It filmed early warning radar, military barracks, a lookout tower, and a runway long enough to handle every aircraft in the Chinese military on an expanded Fiery Cross Reef.

Hence, the U.S. argument that China is militarizing the South China Sea.

In response to that claim, China has accused the U.S. of doing the same — and it is.

In March, the U.S. announced it would deploy conventional forces to the Philippines for the first time in decades, utilizing five Filipino military bases.

That's in addition to the sizable presence the U.S. already maintains in the region.

This is what China means when it accuses the U.S. of containment.

The U.S. has also continued to challenge China's claims by actively patrolling the region with spy planes, bombers, and destroyers.

When the Poseidon made its flight, it blatantly ignored eight warnings from the Chinese military to vacate the area.

And last fall, the USS Lassen, another guided-missile destroyer, went within 12-mile limits of the islands China claims are its sovereign territory. It was shadowed by the Chinese navy the whole way.

"If the United States continues with these kinds of dangerous, provocative acts, there could well be a seriously pressing situation between frontline forces from both sides on the sea and in the air, or even a minor incident that sparks war," warned Chinese Navy chief Admiral Wu Shengli.

Communist media mouthpieces are blaring, too.

"If the United States' bottom line is that China is to halt activities, then a US-China war is inevitable in the South China Sea," read a recent editorial in China's Global Times. "We do not want a military conflict with the United States, but if it were to come, we have to accept it."

And after the latest incident, the paper suggested:

Beijing ought to carry out anti-harassment operations... should first track US warships. If they, instead of passing by, stop for further actions, it is necessary for us to launch electronic interventions, and even send out warships, lock them by fire-control radar and fly over the US vessels.

Vice President Joe Biden even commented on the issue directly during his commencement speech at the U.S. Naval Academy:

In the disputed waters of the South China Sea, the United States does not privilege the claims of one nation over another, but we do unapologetically stand up for the equitable and peaceful resolution of disputes and for the freedom of navigation, and today these principals are being tested by Chinese activities in the South China Sea.

U.S. foreign policy is rebalancing toward the vast potential of the Asia-Pacific region, but we can't succeed if you don't show up. That's why 60% of the United States Naval Forces will be stationed in the Asia-Pacific by 2020.

Now, the South China Sea isn't the only place that China's military is mobilizing.

According the DoD report I mentioned earlier, China has unveiled sweeping organizational changes to its military. These reforms aim to strengthen the Chinese Communist Party’s control over the military and improve its ability to fight in high-intensity regional conflicts at greater distances from the Chinese mainland.

Furthermore, China is seeking to leverage its growing military might to establish regional preeminence and expand its international influence. This is essential to achieving “great power status” and what Chinese President Xi Jinping calls the “China Dream” of national rejuvenation.

As a result, China is boosting military spending and modernizing its forces to counter all military resistance to its objectives, including that of the United States.

China’s official military budget grew at an average of 9.8% per year in inflation-adjusted terms from 2006 through 2015.

Its submarine bases on Hainan (where the EP-3E Aries aircraft was intercepted Tuesday) are home to an expanding fleet of nuclear-armed submarines.

The Chinese navy will likely comprise more than 400 ships by 2030. And the country's air force has expanded to 3,010 operational aircraft. That's still roughly one-fifth the size of the 13,717 aircraft across the four services (including the U.S. Marine Corps), which is enough to mount a serious defense. 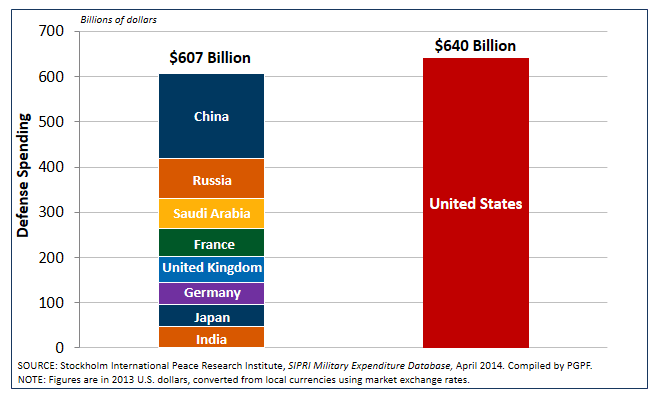 Meanwhile, in the U.S. military spending continues to dwarf that of the developed world. All told, the U.S. spends more than China, Russia, France, the U.K., Germany, India, and Japan combined. With ongoing conflicts like Libya and Syria in the Middle East, and a re-emergent Russian threat in Europe piling onto the increased threat from China, that's likely to rise, too.

As you're no doubt aware, the economies of the United States and China are very much entwined. China holds more than $1 trillion in U.S. debt. And its manufacturing hubs are crucial suppliers for American merchants.

A war between China and the U.S. would do catastrophic and unpredictable damage to that relationship, and almost certainly drive investors into safe havens.