We’re on a Collision Course With Disaster

Swagel is an economist who attended Princeton and then Harvard. He’s worked for the Federal Reserve Board of Governors, the International Monetary Fund, and the White House under George W. Bush.

So he’s a guy who's worth listening to. Especially when he’s ringing alarm bells.

And that’s exactly what Swagel was doing when he told Republican and Democratic lawmakers on the powerful House committee that "our debt is on an unsustainable path."

For two and a half hours he explained that trillion-dollar deficits are leading us down a path to ruin, that the U.S. workforce is aging, and that GDP growth will inevitably regress to the "maximum sustainable growth rate" of 1.7%.

And how did our lawmakers respond?

Well, naturally, they asked serious, probing questions about how we can cut spending and raise income without undermining our economic expansion.

To a person, members agreed that they need to put aside petty partisan squabbles, and to reach across the aisle to compromise on a solution that best serves America and its people.

None of that happened.

No, instead our lawmakers asked Swagel to referee a catty debate about who’s really responsible for the greatness of our economy.

Republicans insisted that President Trump is a financial maven who’s brought upon us a golden age of economic prosperity, while Democrats credited Barack Obama with bailing us out of the Great Recession and setting us on the course for a decade-plus of growth.

All of this while an expertly-qualified economist sat in the room trying to explain that America’s debt burden is so absurdly high it poses a serious long-term threat. Or essentially, that our economy isn’t really as great as it seems to some people.

"You're kind of like the creamy part of the cookie, getting squeezed by both sides," one lawmaker told him.

I can only imagine this man’s exasperation.

So please, allow me to amplify Swagel’s warning, because Congress clearly won’t.

The crux of it is this: U.S. debt is growing faster than the economy.

And that’s a problem.

You see, when the economy is actually in good shape, GDP growth outpaces debt. That’s something you can see in the chart below. 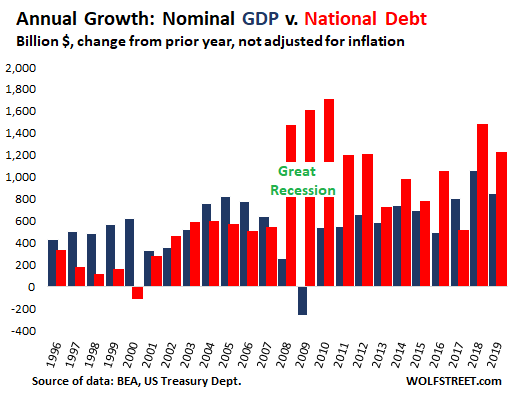 Of course, everything changed when the global economy collapsed in 2008. That ushered in a new era of spending. You might remember the Tea Party movement began around that time.

That’s not abnormal though. Governments often try and spend their way out of recessions. They issue tax cuts, or in Obama’s case, delivered hundreds of billions of dollars to the banks and car companies that overextended themselves.

Of course, those banks returned to profitability. In fact, they’re more profitable now than they’ve ever been. Car companies like GM have recovered too.

And yet, we’ve continued to spend. The economy is expanding and unemployment is at a 50-year low, but we continue to spend.

And it’s getting worse.

The latest CBO report shows 10 straight years of trillion-dollar deficits carrying us to 2030. 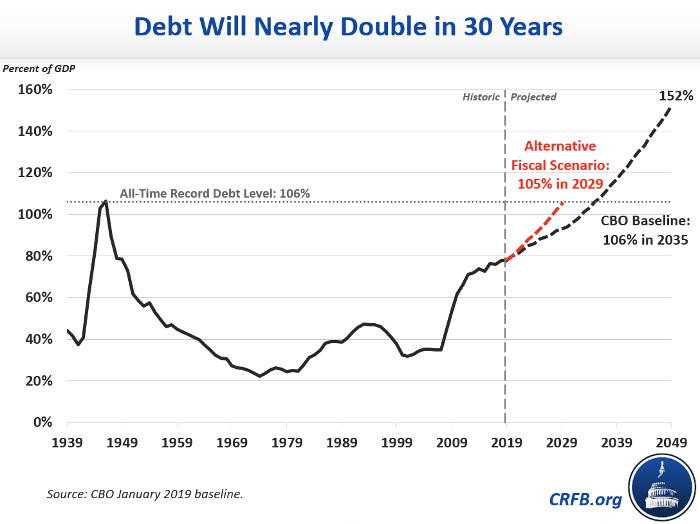 That’s what Republicans and Democrats were fighting to take credit for — an economy that is being propped up by a massive debt balloon.

But I guarantee you none of those politicians are going to be fighting to take credit when that balloon pops.

When that happens, they’ll be right back to pointing their fingers in the opposite direction.

And like an exasperated economist, Americans will be left to look on with bewilderment, wondering why we ever entrusted these myopic morons with our fortunes.

That’s why I encourage you to be proactive now. Get ahead of the disaster that Swagel and others are trying to warn us about.

Here’s how you can do that.

The Infection Causing Swollen Stock Prices
What's causing all-time stock market highs? We continue to hear much about job growth and the tweeter-in-chief would have you believe the economy is GREAT!! But perhaps the state of the economy is too good to be true...
The Table Is Set
2019 will be remembered as the year that set the table for a raging commodities bull market that will kick into high gear in 2020. Outsider Club editor Gerardo Del Real explains why the table is set...
Heal Your Ailing Portfolio Body