Now, UBS is backing me up.

Maybe analyst Carl Berrisford has been reading, because he just released a report that estimates space-based manufacturing could triple to more than $1 trillion from $340 billion in the next 20 years.

And in the next 10 years alone, it will easily double, surging to $805 billion, UBS says.

But that’s not all.

As I indicated above, space is the one investing frontier people aren’t talking about.

Make no mistake, if you’re just getting into marijuana and 5G stocks now, you’re already too late.

The biggest gains have been had.

The public is already all-too aware of them.

However, that’s not true of the space market.

There, public investment sentiment has yet to be roused. But it will be when Jeff Bezos' Blue Origin and Richard Branson's Virgin Galactic start taking tourists to space in the next few years.

As Berrisford says: “These will be important catalysts for the space economy, awakening consumers and investors to the commercial possibilities of space, and creating demand for new applications, not unlike the trajectory of the online economy over the last 20 years.”

"While space tourism is still at a nascent phase, we think that as technology becomes proven, and the cost falls due to technology and competition, space tourism will become more mainstream," they wrote in the note. "Space tourism could be the stepping stone for the development of long-haul travel on earth serviced by space."

Indeed, high-speed-travel space routes will represent an annual market of at least $20 billion and compete with long-distance airline flights, they concluded. Space tourism will be a $3 billion market by 2030.

Again, this would come at the expense of long-distance cargo flights and shipping. These, UBS says, would “be cannibalized.”

For example, SpaceX's Starship rocket, which is currently being built, could fly as many as 100 people from New York to Shanghai in 39 minutes, rather than the 15 hours it takes currently by airplane.

If just 5% of those flights are serviced by space at $2,500 per trip, the revenue opportunity would be more than $20 billion per year, according to the investment bank’s figures. 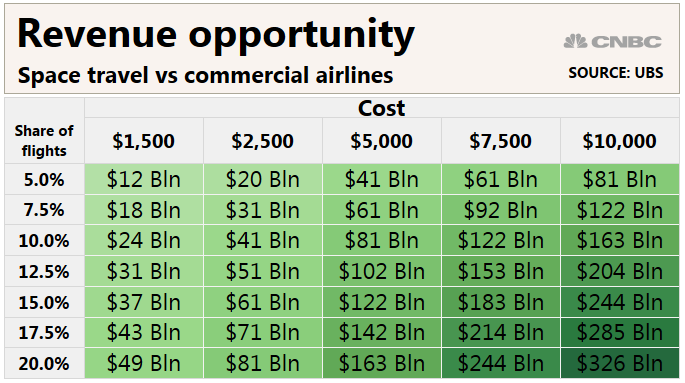 And that’s a relatively conservative estimate. As you can see in the table above, a larger share of the travel market, or higher prices, will yield greater revenue.

If the cost of a trip reaches $5,000, or if space flight captures 10% of the market, the potential revenue would more than double to $41 billion.

And again, that’s just one aspect of the broader space market.

We haven’t even discussed moon colonization and space mining.

As I noted in February, the moon has relatively small, but meaningful, caches of gold, silver, titanium, and an isotope known as Helium-3 that could be used in nuclear fusion.

But more importantly, it has a serious strategic value as a host of weapons and satellite systems, and even an intergalactic gas station and habitat.

This is why the Trump administration is planning to send astronauts back to the moon in 2024, the first such mission since 1972.

NASA has already spent $2.6 billion to establish the Commercial Lunar Payloads program, and opened up bidding to a small constellation of companies.

And both the space agency and the Pentagon are investing billions of dollars more in private companies like SpaceX, helping them develop rockets to launch satellites. More public-private partnerships are on the way — something that will help reduce costs.

It’s not just about the moon, either.

Companies are lining up to get at those riches, too.

And what about the Space Force?

The establishment of a new branch of the U.S. military that deals specifically with space missions is running parallel to all of this. Space travel, satellite warfare, and hypersonic weapons will all fall under its purview, generating billions of dollars more in investment.

And that’s what brings me back to the high-flying space stock I recently recommended to my Wealth Warrior subscribers.

This is a company that’s powered more than 1,600 rocket launches since the inception of the U.S. space program, including the legendary Apollo missions that landed the first men on the moon.

It’s absolutely vital to the U.S. space mission, and it stands to rake in billions of dollars from the market UBS says will top $1 trillion.

So don’t miss out on that. Get all the information you need right here.

The Race For Moon Riches
“This time, when we go to the moon, we’re actually going to stay,” said NASA Administrator Jim Bridenstine. “We’re not going to leave flags and footprints, and then come home, to not go back for another 50 years.”
Space Force to Defend Against Chinese and Russian Satellite Threats
It’s no secret that space defense has become America’s Achilles' heel. We’re all but defenseless against these new technologies. Outsider Club founder Nick Hodge explains how the U.S. plans to catch up and how investors can take advantage...
The Plot to Destroy America
These days, Americans are so busy fighting among themselves, they’ve completely lost sight of our most dangerous enemies. And that’s why you’re missing the gravest threat to the United States today...
Investing in Marijuana Without Getting Burned
The marijuana industry has rewarded scores of investors with life-changing gains.