This Russian “Ghost” Ship Could Disrupt 95% of Global Communications

First things first, I was on the Angel Research Podcast earlier this week, so if you’d like to hear me talk about the current state of geopolitical affairs, as well as defense contractors and potential stock investments, you should check that out here.

One of the key themes of that discussion was the war in Ukraine, how badly Russia has failed, and President Vladimir Putin’s increasingly desperate efforts to regain some kind of traction.

It was a timely conversation because this week, a mysterious spate of explosions damaged the Nord Stream gas pipelines that carry gas from Russia to Europe.

There’s no smoking gun in regard to evidence, but Russian naval support ships and submarines were reported to be in the area at the time.

And really, who else would it be?

So it’s almost certainly Russia’s way of making some kind of point.

What that point is remains unclear, but Russia has requested a U.N. Security Council meeting on the subject, so I guess we’ll find out soon enough.

It’s worth noting that the pipelines were idle since Russia curtailed its gas exports to Europe earlier this year in response to Western sanctions. There’s also little environmental damage because natural gas isn’t toxic and merely bubbles to the surface.

Again, that speaks to the symbolism of the act and its role in pushing some kind of political agenda.

It’s simply menacing, and it’s something Russia could point to as an excuse to retaliate or escalate its punitive measures against the West.

Russian propaganda agents immediately accused the United States of blowing the pipelines and floated the idea of hitting back.

“No sane person can doubt [the Nord Stream explosions] were sabotage [by the West],” retired Lt. Gen. Eugene Buzhinsky said on Russian state TV. “I do not know how we will respond, but I think that such actions cannot be left unanswered.”

Other pundits seized on Tucker Carlson’s insinuation that the Biden administration was behind the attack and that Russia would be justified in cutting internet cables under the sea between London and New York.

“Well, the cables, yes — why not?" Buzhinsky said in response to the suggestion.

That kind of an attack is certainly possible. In fact, it’s something Russia has been preparing for for years.

It even has a special “ghost” ship that sneaks around the globe testing and tampering with undersea communications cables.

It’s called the Yantar, and it’s paid visits to countries all around the planet, including the United States.

According to the BBC, "The Yantar belongs to Russia's Main Directorate of Underwater Research (GUGI in Russian), part of the defense ministry."

It’s based in Russia’s secretive submarine base in the Russian Arctic, Olenya Guba.

The Yantar is a 354-foot oceanographic vessel that holds a crew of about 60, and it has at least three separate systems for conducting seabed warfare.

It can deploy the three-man submersibles Rus and Konsul, which can dive to about 20,000 feet, and it has two different remote-operated vehicle (ROV) systems. Together, these systems can reach almost any undersea cable on the planet, even in deeper waters thought to be safe. 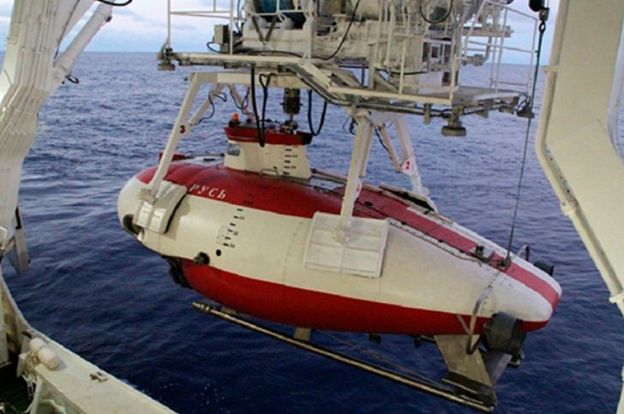 According to Russian sources, the Yantar was “designed for deep-sea tracking” and “connecting to top-secret communication cables.” And in addition to tapping the cables, the ship can cut or jam the signals they carry.

In September 2015, the Yantar discreetly sailed toward Kings Bay, Georgia, home to a vital U.S. submarine base.

There, Russia’s Parlamentskaya Gazeta says the ship was “collecting information about the equipment on American submarines, including underwater sensors and the unified (U.S. military) information network.”

The Yantar paid another visit four years later when it sailed north from Trinidad, the island nation situated just north of Venezuela, into the Caribbean Sea before turning off its tracking systems and presumably probing the U.S. coast once more.

And that’s not all.

On October 16, 2016, the Yantar appeared off the coast of Syria. Two day later, "a Syrian telecom company ordered emergency maintenance to repair a cable in the Mediterranean that provides internet connectivity to several countries, including Syria, Libya, and Lebanon," reports WHYY.

The Yantar then lingered for half the four-day repair period.

A submarine cable linking Persian Gulf nations experienced outages in Iran. Hours later, the Yantar left Oman and headed to an area about 60 miles west of the Iranian port city of Bushehr, where the cable runs ashore. Connectivity was restored just hours before the Yantar arrived on November 9. The boat stayed stationary over the site for several more days.

The Russians “are doing their homework and, in the event of a crisis or conflict with them, they might do rotten things to us,” said Michael Kofman, a Russian military expert at nonprofit research group CNA Corp.

Indeed, there’s a lot of mischief to be made in the murky depths of the ocean floor.

There are more than 400 fiber-optic cables stretching more than 620,000 miles — enough to loop around the Earth nearly 25 times — along the ocean floor. 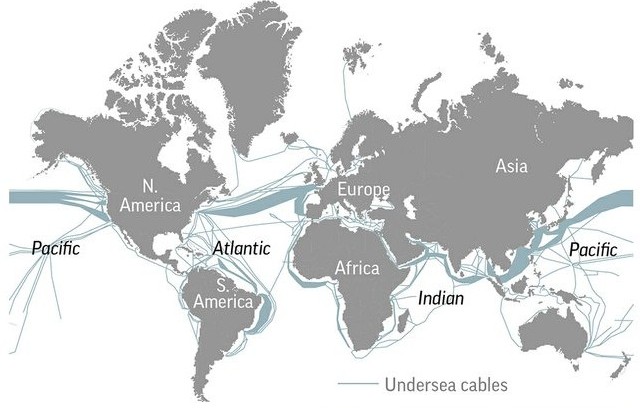 This elaborate ball of fiber-optic yarn accounts for 95% of the world’s calls, emails, and texts, as well as $10 trillion worth of daily financial transactions.

Many of the lines are owned by private telecom companies, like Google, Verizon, and Microsoft, but many others were placed there by governments around the world to ensure rapid communication across the globe.

And cutting them has catastrophic consequences.

We know this because on occasion, the cables are accidentally severed by unknowing ships dropping anchor.

Of course, despite Tucker Carlson’s weirdly giddy speculation that chaos would erupt if Russia were to sabotage them, the effects would be more of a nuisance than an Armageddon.

Still, that could be exactly what Russia’s after. One of its main goals right now is to whither Western support for Ukraine, and sudden communications outages could antagonize the public into pushing for peace.

We’ll just have to see whether or not that happens.

In the meantime, I’m continuing to monitor all things defense in my Secret Stock Files investment service, where I cover all the cutting-edge companies and technologies that are at the vanguard of military development.