Over the past few weeks, I've gone out of my way to detail a relatively small market that's poised for incredible growth.

It's not one many investment analysts ever mention, either. It's flying under the radar, so to speak.

It's a market that's already grown 138% over the past three years, but a fresh research report from BIS Research suggests its size will grow another 123% in the years ahead with a compound annual growth rate (CAGR) of 18.15%.

This is the market for directed-energy weapons, or laser weapons.

But it's not going to stop there.

The BIS Research report projects the market will grow almost 20% a year, and ultimately double again to $4.02 billion by 2030.

"The demand for Directed Energy Weapon Systems is primarily due to the need for enhanced border security arising due to increasing land disputes, migration, and smuggling, has compelled several countries to further strengthen their security," the report says. "Additionally, the directed energy weapons are developed with the aim of countering the growing threats from unmanned aerial vehicles, mortars, missiles, and small boats at a low engagement cost. Major advantages of directed energy weapons are their high speed, precision, flexibility and low operation cost."

Again, this is something I first told Wealth Warrior subscribers back in April 2019.

And in March, I went even further and officially recommended a laser weapons components company that's set to profit from this trend.

Specifically, the company makes crystal diodes —  the key part of any functioning laser, whether it’s being used in barcode readers, DVD and Blu-ray disc players, fiber optics, or in our case, weapons.

In fact, this company is the No. 1 diode supplier for military laser systems worldwide, supplying major-league defense contractors like Lockheed Martin and Northrop Grumman.

I don't mind telling you both of those companies are in the Wealth Warrior portfolio, too. Both have returned positive gains to investors since I recommended them. And last month, Northrop Grumman's latest laser weapon, the Solid State Laser-Technology Maturation Laser Weapon System Demonstrator (LWSD), was test-fired aboard the USS Portland. 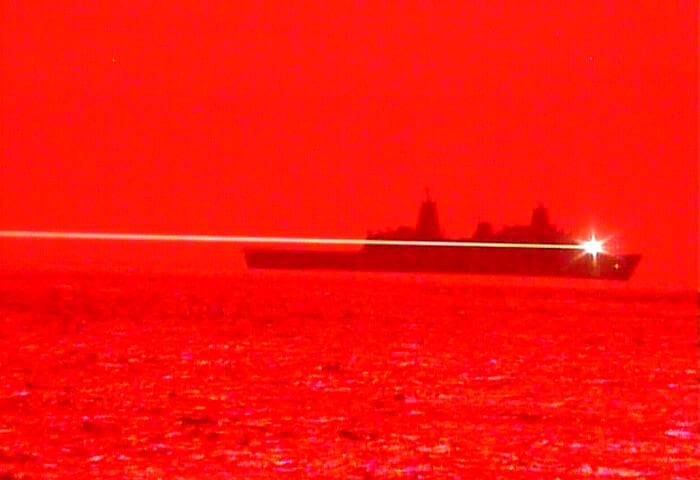 The LWSD has an output of 150 kilowatts, making it five times more powerful than other Navy lasers. That's enough output to take down a drone mid-flight, which is exactly what the LWSD did.

And even more powerful laser weapons are coming down the pike.

The Army, for example, is pushing forward with plans for the most powerful laser weapon to date: The Indirect Fires Protection Capability-High Energy Laser (IFPC-HEL), which aims to deliver 250 to 300 kilowatts of explosive energy.

This, after the branch deployed three new laser weapons in April. Those weapons — the HELWS, PHASER, and THOR — are mounted on all-terrain vehicles or cargo containers, making them highly mobile and devastatingly effective against drone swarms, mortars, and rockets.

The Air Force is working on laser weapons, too, with plans to test-fire a 60-kilowatt laser weapon equipped on an AC-130J gunship in 2022.

And the U.S. Air Force Research Laboratory (AFRL) — which developed the THOR laser weapon system — has called on contractors to submit plans and ideas for more laser and microwave weapons with the ability to “precisely attack ground targets” while defending against “surface-to-air missiles and air-to-air missiles.”

All of these projects and more have been hastened by the Pentagon's rapidly-growing directed-energy weapons budget, which has seen a 200% surge in funding over the past couple of years.

That, too, will likely continue to rise, as the Pentagon competes in a 21st-century arms race with near-peer adversaries like Russia and China — both of which are developing ultra-powerful laser weapons systems of their own.

So if you want to learn more about laser weapons — the market, the companies, the capabilities, and most importantly the small laser weapons parts supplier I've found — you should check out my latest report.

It tells you everything you need to know.