The World's Most Powerful Secret Societies: The Freemasons

They claim to be a fraternal group of men seeking only self-improvement and the betterment of society, but the Freemasons have long been suspected of occult worship and shadow manipulation.

The group got its beginnings 1717 London, where it first attracted the ire of Christians skeptical of the group's religious practices.

As an organization, the Freemasons claim to believe in a supreme being, a “grand architect.” But not everyone is convinced that architect is the Christian God. Some even believe it's Satan. It could also be Baal, Baphomet, Dajjal, Rahu, Osiris, some combination of these, or an entirely original conception independent of any other earthly religion.

It's impossible to know, since the group has been very successful at keeping its rituals secret. As its symbolism suggests, the Freemasons are a pyramid organization. That means a select few at the top know everything, while the majority of members at the base know little.

Its not enough to simply join the Masons. You need to work your way up the ranks, proving your usefulness and relying on other members for help. Only then will you learn the truth...

Critics say evidence of the group's occult practices hides in plain sight. The Freemason symbol of a compass and a square form a pentagram. This pentagram is the group's calling card, discretely featured on our money and in the the cityscape of Washington D.C.

You have to admit, it seems odd to have a pyramid with an all-seeing eye on our $1 bill. It's also odd that the words decorating that pyramid read: "Annuit Coeptis Novus Ordo Seclorum," which translates to "Announcing the Beginning of the New World of the Ages" or "New World Order."

And what's more, is that if you lay a pentagram over the pyramid, the points reach the letters M-A-S-O-N. 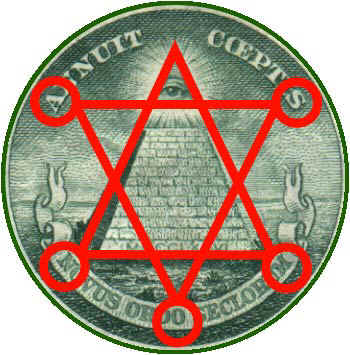 In 1790, President George Washington, a Freemason, appointed another Freemason, the French-born Pierre Charles L'Enfant to design the federal capital.

Connected to the compass is the upside down pentagram, formed by DuPont Circle, Logan Circle, Washington Circle, Mt. Vernon Square, and the White House.

Of course, the Freemasons' aren't just cheeky designers, content to slip their secret symbols into American icons. Their members hide in plain sight, as well.

In addition to George Washington – who earned the distinguished title of Master Mason – 13 other Freemasons made it to the office of President. That includes James Monroe, Andrew Jackson, Teddy Roosevelt, Franklin Roosevelt, Harry Truman, and Gerald Ford.

In fact, the Washington Bible, on which many presidents take the oath of office is a Masonic bible. It belongs to the St. Johns Lodge in New York City.

Generals, Supreme Court Justices, and many influential artists, actors and musicians were Masons, too.

J. Edgar Hoover headed the FBI as a Mason. Senators John McCain and Bob Dole ran for president as Masons. And Astronauts John Glenn and Buzz Aldrin, flew to the moon – or faked it, depending on what you believe – as Masons. Aldrin even brought a Masonic flag to the moon in 1969.

John Wayne, Clark Gable, Harry Houdini, Mark Twain, Oscar Wilde, and Mozart... all Masons. Henry Ford, too. Some even say Jack the Ripper was a Mason.

Architects of the New World Order

Clearly, the group has infiltrated every aspect of society, consolidating power at both the federal and local level.

But what is the ultimate goal?

The accumulation and perpetuation of their power and influence, for one. But maybe more, as well.

The Freemasons are suspected of:

So keep your eye out for secret handshakes.

Meet the Bilderberg Group
In several weeks, a group of the world's major political leaders, international bankers, and power brokers will meet to discuss global policies...
Investing in Marijuana Without Getting Burned
The marijuana industry has rewarded scores of investors with life-changing gains.