The View From The Peak Of The Cycle

Following the Fed raising rates for the seventh time on Wednesday, investors continued to chase FAANG stocks, encouraged on Thursday by a strong retail sales number for May, which came in at 0.8% — more than double expectations, propelled by higher gasoline station sales.

Core retail sales are at +2.9%. Take out gasoline, auto parts, and fuel-related costs, and we arrive at the truth... not much growth in sales. 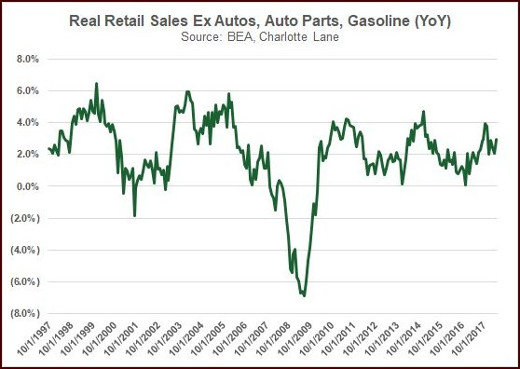 What’s more, the world is awash in oil. Oil held in floating storage in Europe is at an 18-month high due to booming U.S. oil production. The point I am trying to make here is this is another example of artificially boosting oil prices to create inflation and to create the illusion of economic growth — all simply by spiking oil prices, which climbed from $42 a barrel in June of 2017 to $72 a barrel in May of this year.

It has been the energy sector that has led the S&P 500 in earnings growth over the last four quarters but this sector is peaking now, especially with OPEC boosting oil output from July onward.

After this week’s rate hike, the yield curve fell sharply, coming ever closer to inverting with just .39% between the 2-year and 10-year Treasury bond yields. The Fed is looking to invert the yield curve, especially with two more rate hikes coming in the next couple of quarters. 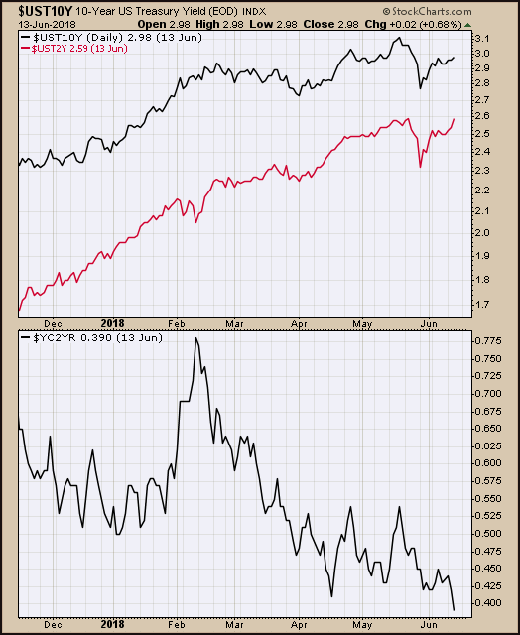 Meeting just a day after the FOMC lifted rates for a second time this year, the ECB left interest rates unchanged and laid out plans to taper its program of monthly bond purchases in the next quarter or two, with the ECB looking to end QE entirely by the end of 2018.

This news sent the euro into a tailspin. In addition, the U.S. set tariffs on $50 billion worth of products from China on Friday, which also sent the U.S. dollar sharply higher on Thursday. 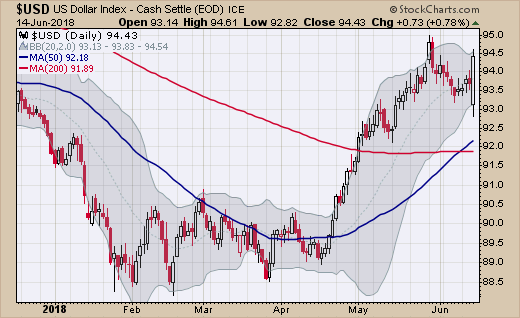 A rising dollar is not bullish for stocks.

We continue to have a very split tape. The home building sector (XHB) is officially now in a bear market. Mortgage applications have plunged in six out of the last seven weeks. This should tell you what’s coming down the road!

The Producer Price Index for the final demand increased by 0.5% in the month of May, led by a 1% increase in prices for final demand goods that were largely attributed to a 4.6% jump in the index largely because of energy costs. 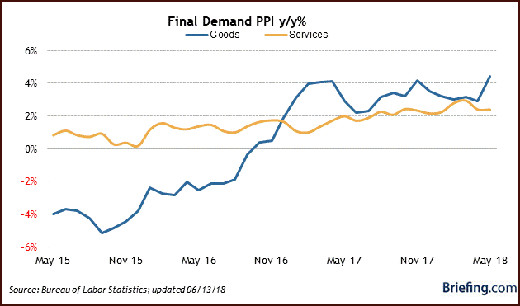 On a year-over-year basis, the final demand for the Producer Price Index (Wholesale Goods) has shot up to 3.1 and is still climbing in spite of the six previous interest rate hikes (and now this week’s seventh hike).

This is a 75-month high for inflation. This is why I think we’ve seen the peak in the economic cycle.

The key thing to understand about this week’s CPI at 2.8% and the 4.6% PPI is these numbers are woefully understated given the government’s manipulation of these numbers. Inflation is actually running much higher when you consider food prices, rents, housing prices, college tuition, gasoline, and property and state taxes.

Economist John Williams of Shadowstats.com has been tracking what the key economic numbers would look like if honest numbers were being used for many years and he has a sterling reputation for being accurate.

The truth is when the Glass-Steagall Act was signed into law by President Bill Clinton on November 12, 1999, big investment banks began taking over commercial banks and the velocity of the money supply took a terrible plunge as investment banks took control of capital.

From that point forward, two of the worst recessions since the Great Depression followed and, according to Williams, the government began manipulating the economic data to cover up what was really going on in the economy.

So much of what we see is a con. Unemployment is being reported by the government at 3.8%, the lowest number in 50 years! According to Williams, if honest numbers were being used the unemployment rate would be 21.5%, similar to deep recessions.

What the government is not telling us is that it has simply been moving people from the “officially unemployed” category to the “not in the labor force” category for many years, while counting illegal immigrants who work in the U.S. as employed.

There are 102 million Americans who do not have a job, about 1 out of 3 Americans. To make matters worse, our failing school system is not preparing skilled workers to meet the needs of skilled job opportunities.

The government/Fed and investment banks have had to do a series of QE to pump up the stock market to keep it from crashing, with the government borrowing trillions upon trillions to keep us afloat. It is stupid to put one’s head into the sand and pretend this doesn’t matter.

Corporations are borrowing massive of amounts of money in corporate bonds not to expand their companies but to buy their shares back to artificially financially engineer higher profits, so CEOs can get higher bonuses and pay out their dividends.

I find corporate accountants using questionable accounting methods to boost profits by leaving off their balance sheets items that might harm the look of the quarterly returns. We don’t know what we are getting, it is becoming so corrupt. Corporations are holding the most leveraged debt in history, while at the same time the public is tapped out as consumer debt is also soaring.

While stocks were only off slightly, investors need to be careful now as the Fed has a pattern of supporting the stock market on FOMC days. This stock market has been under careful manipulation these last few months to try and prime the pump again, but rate hikes do matter.