The Two Big Reasons Gold Will Soar In 2018

The steady rise in gold prices was the most underreported story of 2017.

While the headlines (and speculators) chased after digital currencies like Bitcoin, gold quietly reasserted itself as the ultimate alternative currency.

Gold ended the year up 15%, and carried that momentum right into 2018. Through Wednesday, the metal had logged gains in 10 of 11 straight trading days. That’s the 8th best performance since 1968. And it carried the price of gold as high as $1,321 — its highest level in more than three months.

So, what exactly is driving this price surge?

After all, many “experts,” analysts, and gold-haters said this rebound would never materialize.

It was made clear that the dollar would strengthen as the Fed raised rates, stocks would keep going up, and gold would sink into oblivion.

Well, I obviously never believed that, and there are a few reasons why. The two biggest are shrinking gold supplies and an overvalued dollar.

If you considered those aspects of the market, then gold’s rise was entirely predictable. (And we did predict it. Repeatedly.)

And if you consider them further, you’ll see why gold is poised to continue rising through 2018.

As you probably remember, gold suffered greatly as we emerged from the Great Recession.

This was devastating for miners. Those that weren’t driven into bankruptcy were forced to scale back production. And now, we’re seeing the results of that.

Another metals consultancy, CPM Group, projects 2018 gold output will be 97 million ounces, compared to 97.8 million in 2017. And CPM says production will continue to slide through 2024/25.

Now, you don’t have to be a commodities expert to know that when supplies fall, prices tend to go up. And that’s what’s been happening.

But, of course, that’s not all that’s been happening…

Outside of supply and demand, the value of the dollar has the most influence over gold prices.

And this is where many analysts and observers got tripped up last year.

The conventional wisdom that higher interest rates translate directly into a stronger dollar is absolutely false. It’s something people say, and take, as a given.

Look at the last two monetary tightening periods — in February 1994 and in June 2004 — and you’ll see nearly identical patterns.

So the data is clear that the market tends to overestimate the effect monetary tightening has on the U.S. dollar and, thus, on gold.

And that’s exactly what we saw last year.

In fact, the ICE dollar index, which measures the dollar against a basket of six other currencies, suffered its biggest annual decline in 14 years. 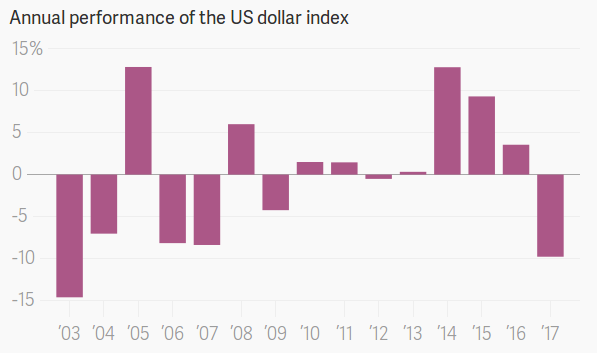 What this tells me, and what I’m telling you, is that gold has been oversold and underproduced for years now.

And if you add in the political upheaval we’ve seen around the world (the Brexit, North Korea, the Trump presidency, a potential stock crash, etc.), we’re likely to see more safe haven buying, as well.