The Truth About the McDonald’s Ice Cream Scandal

It’s a story of old business partners, corporate greed, and putting profits before the customer.

I can’t remember the last time I got a McDonald’s ice cream.

So I didn’t think much of it when I started seeing videos and memes going around the internet about how the McDonald’s ice cream machines are always broken. 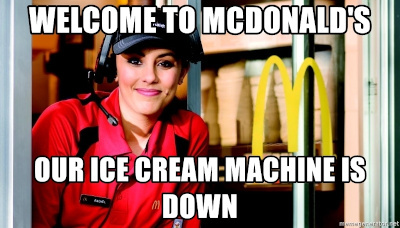 Customers were even seen attacking McDonald’s employees over this nonsense.

But after the Federal Trade Commission announced in September of this year that it’s investigating why the ice cream machines keep breaking down, it piqued my interest.

It all comes down to the manufacturer of the ice cream machines, the Taylor Company, and the model built exclusively for McDonald’s. In fact, both have headquarters in the same state.

But it’s only the McDonald’s machines that keep breaking...

Well, they have no choice.

When a McDonald’s restaurant is franchised, the franchisee signs a contract that lists the corporate-approved products he or she can use in that store.

And the Taylor C602 digital ice cream machine is the only McDonald’s-approved product a franchisee can purchase if they don’t want to breach the contract. However, the C602 has a 15% failure rate and the owner is on the hook for anything that goes wrong with it.

Rage Against the Ice Cream Machine

Here’s where things get even more sticky. All Taylor ice cream machines go through a cleaning cycle, typically lasting four hours, where the ice cream product and hoses are heated up to kill bacteria. Once that cycle is over, the machine should function normally.

But the C602 is notorious for not completing the cleaning cycle and displaying nonsensical error codes that even someone with the user manual can’t figure out.

The machine locks up, and you can’t make ice cream without fixing the problem.

And to top it all off, most of the codes found in the manual say the same thing... “Call a service technician.”

So the owner of the franchise has a choice to make. Either lose money by not selling ice cream or call the repair technician and pay an astronomical fee ($144 for the first half hour and $315 for each additional 15 minutes), effectively keeping Taylor in business.

In a recent corporate presentation, Taylor admitted 25% of revenues come from machine repair and maintenance.

Here’s the rub: Taylor fabricates products that are known to fail, with the only solution to the problem being their own expensive repairmen. The company’s selling its machine as a subscription service, and McDonald’s corporate doesn’t care because its bottom line isn’t negatively affected.

Over the years, Taylor has developed software updates for the machines, but they only display more confusing error codes, most of which still tell the user to call the technician.

But just last year, ice cream lovers rejoiced when tech company Kytch invented a plug-in device for the Taylor ice cream machines that displays diagrams on an app about the specific error codes and how to fix them.

Once McDonald’s corporate heard Kytch was selling the product to franchises, however, it told franchise owners that the software was dangerous and that Taylor was working on a similar fix.

It even banned franchises from purchasing the product, saying it would be a breach of contract to use the Kytch device.

And Taylor did come out with similar software, but it still doesn’t display as much information about the error codes as the Kytch software. So the machines remain broken.

If you’re craving a late-night snack, I suggest checking out mcbroken, a website dedicated to tracking the health of McDonald’s ice cream machines.

We’re doing okay here in Baltimore, with only five machines down. In New York, more than 20% of machines are broken.

At first glance, such a small issue like broken ice cream machines seems innocuous — probably why both McDonald’s and Taylor have gotten away with this scam for so long.

But just as in life, it’s the little things in business that really matter and drive stock prices. Investors don’t care about the issue because all they see is the consistent recurring revenue.

Middleby Corp. (NASDAQ: MIDD) acquired Taylor in 2018, and its stock stock is up more than 42% the last five years, while McDonald’s (NYSE: MCD) is up 108% over the same time frame.

The companies are protecting their corporate interests and profits at the expense of the customer, a story we see far too often. And because no one has held them accountable, the market has created an environment where companies think they can get away with it.

We’ll see how long the ice cream machines remain broken now that both companies are being investigated by the SEC.

It’s the play on recurring revenue that investors can’t get enough of.

Some of the best-performing companies of the last decade all have a subscription component — Amazon (NASDAQ: AMZN), Disney (NYSE: DIS), Netflix (NASDAQ: NFLX), Spotfiy (NYSE: SPOT)... the list goes on.

And selling a machine as a subscription is nothing new, but you need to know upfront what you’re getting into (why the McDonald’s deceit will come back to bite it in the rear end).

Even John Deere (NYSE: DE) has taken some flak lately over its license on its tractor control computers, preventing users or mechanics from modifying them.

Slot machine manufacturers have done it the right way by leasing their machines to casinos and then striking royalty deals, giving investors in these companies an opportunity to get a piece of the profits.

But royalties are just a sliver of the nascent $449 billion legal sports betting industry, and a select few companies are making bank off of all the excitement.

Make sure to watch this presentation before Monday Night Football tonight for all the details.

While others are betting on the game, you stand to make massive profits.