The Top-Secret Technology Behind “Darkstar”

I’ve been talking about hypersonic weapons for years now, but I’ve never received more questions about them than I have these past few weeks.

It took me a while to figure out why, but eventually someone told me that Tom Cruise takes a joyride in the opening scene of this summer’s blockbuster movie Top Gun: Maverick.

I’m not a movie-goer myself, but I did watch the scene and I will concede that it is, in fact, cool.

Dubbed “Darkstar,” the Top Gun plane is sleek and menacing, and truly not far off from what actual hypersonic planes look like.

So it’s not surprising that the film’s producers got a lot of help from none other than Lockheed Martin (NYSE: LMT) in designing it.

Lockheed Martin has developed and flown more hypersonic vehicles than any other U.S. company. It has decades of development and flight test experience from government contracts and it outpaces its competitors in research and development.

In fact, Lockheed developed America’s first hypersonic plane, the SR-71 Blackbird in 1976. Capable of reaching speeds exceeding Mach 3, the cutting-edge spy plane could fly from New York to London in less than two hours and outpace any enemy missiles that might be fired its way.

Even today, it’s still the second-fastest manned plane in history.

Of course, it could be bumped to third place by the SR-72, which Lockheed Martin has been developing in secret.

The SR-72 will be twice as fast, operating at a speed of Mach 6. It incorporates lessons learned from Lockheed's Falcon Hypersonic Technology Vehicle 2 (HTV-2), an experimental aircraft that flew at Mach 20, or 13,000 mph, after being launched from a rocket.

At those speeds, the aircraft could travel from New York to Los Angeles in under 15 minutes. 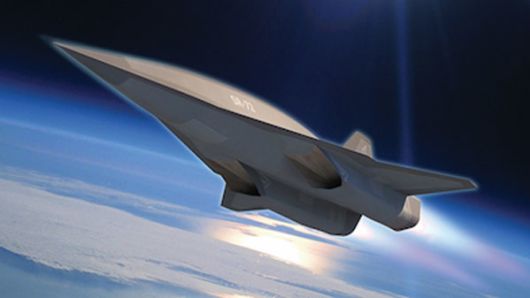 It’s this plane that formed the inspiration for Darkstar.

However, manned or even unmanned, hypersonic planes aren’t the endgame of this technology. Sure, a hypersonic plane could conceivably provide reconnaissance the same way the original Blackbird did…

But with today’s satellite technology, that’s not really necessary.

And when it comes to actually striking a target, it makes more sense to simply entrust the task to a hypersonic missile.

To that end, Lockheed Martin and others including Northrop Grumman and Raytheon are working on a vast array of government-backed hypersonic projects.

For example, there’s the Hypersonic Air-Breathing Weapons Concept (HAWC) — a hypersonic cruise missile that releases from a fighter jet.

Another hypersonic project under development is the Air-Launched Rapid Response Weapon (ARRW, or “Arrow”).

The ARRW is a rocket carried by an aircraft, such as a B-52 bomber, and has a top speed of up to Mach 20.

The most recent demonstration of the technology came in May, when a B-52H Stratofortress successfully released an AGM-183A ARRW off the coast of Southern California.

Following separation from the aircraft, the ARRW’s booster ignited and burned for the “expected duration,” achieving hypersonic speeds five times greater than the speed of sound.

A second test is scheduled for July.

And these are just a few of the projects under development as America plays catch-up with Russia and China, which, I’m sorry to say, are far ahead of us on this technology.

And its most recent request piled even more on top of that, taking the total to $4.7 billion.

It’s not just Lockheed Martin and other major defense contractors that are going to benefit from that spending, either.

I recently tracked down a far less obvious stock — a company that makes equipment that’s absolutely vital to any hypersonic weapon. That means it’s working with every major contractor that’s won a hypersonic contract from the government.

It’s the focus of my latest report, which you can check out here if you want to get in on the hypersonic gold rush.